Puigdemont tells Merkel: "Europe must uphold the rule of law in Spain"

The European Union's current troubles will not be solved if it tries to "get out of the economic crisis" but at the same time moves into a "crisis of civil rights and freedoms". That was the message which Catalan president in exile Carles Puigdemont gave to the European Parliament today, in the presence of German chancellor Angel Merkel. The MEP said that the rule of law must be respected in all those countries where it is called into question - "as is the case in Spain" - and "the persecution of ideas" and "the imprisonment of political dissidents, artists, or journalists" must be brought to an end.

"This is a moral and legal imperative that the European Union cannot continue to avoid any longer," he warned, in his speech in English.

The German chancellor was present in the European Parliament this Wednesday to present the priorities of the German presidency of the EU which will last for the second half of 2020.

During his one-minute speech, Puigdemont asserted that Europe is facing an economic crisis that will be severe and that inequality and poverty must be avoided, but warned that "the EU's problems are also democratic".

"Getting out of an economic crisis to enter a crisis of civil rights and freedoms will not solve the problems of Europe," he affirmed, calling for the economic agenda to be linked to democratic consolidation. Thus, he said, all countries where the rule of law is questioned, "as is the case in Spain", must respect democratic norms.

Later, in Angela Merkel's reply to all the European parliamentarians who had spoken today, she mentioned the importance of maintaining democratic principles. "From the comments that speakers have made, it's very clear that defending the rule of law is important and that's what we intend to do." She mentioned the specific case of Hungary, but made no mention of Spain. 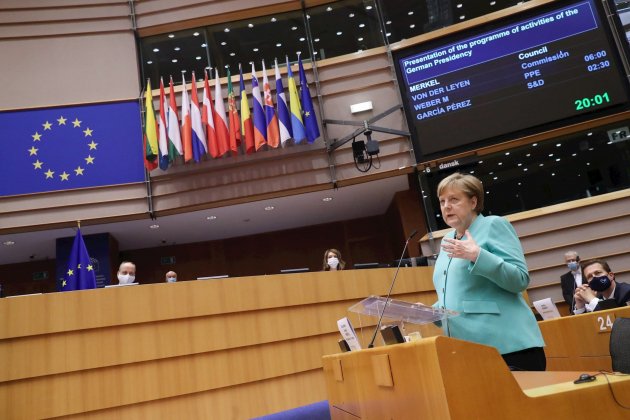 Carlos Puigdemont was the president who led Catalonia at the time of the 2017 independence referendum. Many of his government colleagues are now serving long prison sentences for sedition after being convicted in Spain's Supreme Court in relation to the independence process, but the court's attempts to obtain the extradition of Puigdemont failed in 2018 because a German court saw no grounds for deporting the Catalan leader to face the principal offence of which he was accused, rebellion. In 2019, he was elected to the European Parliament by Catalan and Spanish voters.