Puigdemont in 'Le Monde': "The 27 States keep quiet due to the risk of dividing Spain"

Catalan president in exile Carles Puigdemont has co-signed an op-ed in the Parisian daily Le Monde, together with French MP Sébastien Nadot, pointing out the attitude of the member states of the European Union towards the Catalan independence conflict, unable to be solved by the Spanish government. Puigdemont and Nadot are forceful in the article: "The 27 members of the EU remain silent before the Madrid government, with the pretext that taking a position on Catalonia runs the risk of dividing Spain." 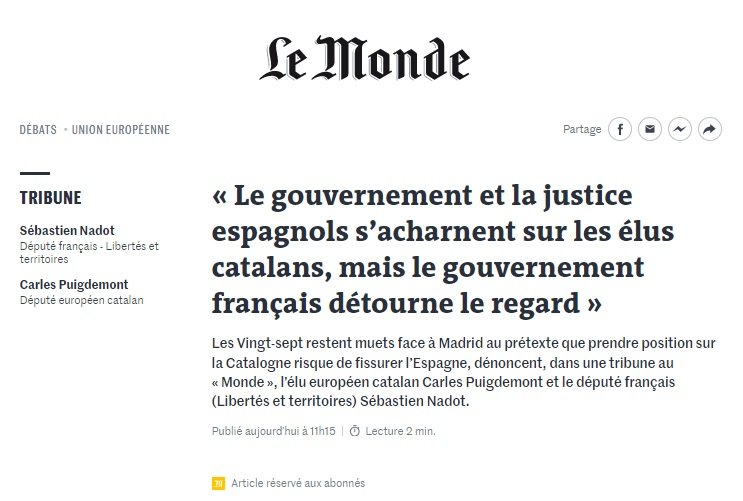 The article begins by citing the case of Puigdemont's former vice president, Oriol Junqueras, to recall the anomalous treatment of the ERC politician's rights by the courts: "Oriol Junqueras, elected as an MEP in the 2019 elections, was the subject of a key ruling by the European Court of Justice (ECJ) on 19th November of that year, declaring that in fact he was a Member of the European Parliament and had held parliamentary immunity since the proclamation of the results of the European elections". But, as the article states, "Oriol Junqueras has spent several years in prison in Spain and is no longer an MEP because of Spanish justice, [which is, however,] subject to the decisions of the ECJ".

The attitude of irrelevance taken in the EU towards the Junqueras case and how he lost his legitimate rights leads the authors to be very critical of the EU's passivity: "The gravity of these attacks on the fundamental principles of democracy is of concern to all Europeans, both ordinary citizens and elected national and European officials, tied solidly to the values ​​and principles enshrined in European treaties and national constitutions".

The article then moves to the example of Junqueras's former colleague in Catalan government, Puigdemont himself: "Puigdemont was elected as an MEP in 2019, was arrested in Sardinia due to the request for immediate extradition made by Spain and he entered a police prison cell, before Italian justice decided to suspend the procedure and refer the matter to the Court of Justice of the European Union." The writers remind their French audience that, yes, the democracy where these things are happening is Europe.

Inconsistent attitudes to Catalonia and Poland?

But the warning they give is not limited just to Catalonia, but rather, they imply that the threat of not facing up to territorial conflicts which weaken the rights and freedoms of the people could broaden if we look at other events further away. However, the difference in the reaction to some events and others is significant: the key example at present is over the policies of the Polish government, which is pulverizing the EU's founding values, those values for which a country becomes a member of the Union.

Puigdemont and Nadot wonder: "When the Polish government is attacking the fundamental rights of LGBT people, would anyone dare say that this is a purely Polish issue? On the other hand, when the Spanish government and its justice system focused on the elected Catalan officials, the French government looked the other way shyly and proclaimed, with its hand in its heart, that this was a purely Spanish matter."

And they conclude with an unnerving question, perhaps suggesting the excuses that governments like Poland could find to move forward with their radical policies: "How should people respond to European leaders when they are, in fact, adopting a two-speed policy on fundamental European rights?"