Puigdemont in Northern Catalonia: "It's an honour to be here, at home"

Catalan president in exile Carles Puigdemont visited the humanitarian hospital Maternitat d'Elna in Northern Catalonia this Thursday evening, along with his fellow MEPs and exiled Catalan government colleagues Clara Ponsatí and Toni Comín. In an event organized by the Catalan Solidarity Committee, Puigdemont said that it is "an honour to be here, at home", referring to Northern Catalonia - in the territory of the French state - since as the president made clear, "it is also Catalonia".

In fact, Puigdemont commented that when he entered the French part of Catalonia by road this Wednesday, he already felt at home, and he expressed his gratitude for the affection and solidarity he had received, saying that it was precisely these attitudes that defeat fascism. And he drew the connection between this and the Maternitat building, an institution founded in 1939 by Swiss activist Elisabeth Eidenbenz, which, as a maternity hospital and centre of solidarity, was the birthplace for 597 children of Spanish and Catalan refugees who had crossed the border fleeing from Francoist forces. It became "a temple against fascism", said Puigdemont.

"Right now, surprise visit of MEPs @KRLS, @ClaraPonsati, @toni_comin to the Elna Maternity Hospital (Rosselló). The exiled president and ministers take part in the "Solidarity Hour" in support of political prisoners, exiles and reprisals" which is usually held on Thursdays in Perpignan."— Josep BONET

The Solidarity Hour in which the three Catalan MEPs took part is a weekly demonstration, usually held in Perpignan, to express solidarity with the plight of the Catalan political prisoners and exiles. 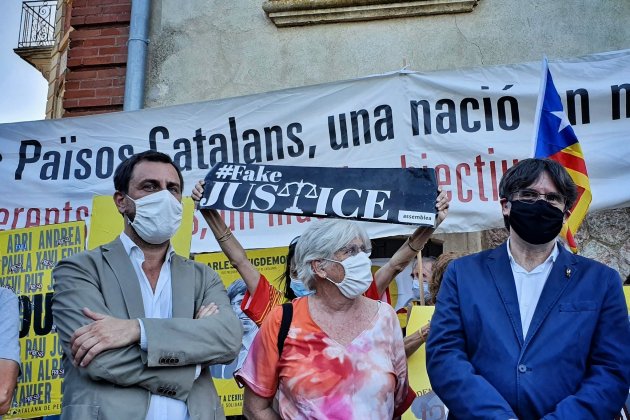 Apart from Puigdemont, Comín and Ponsatí, the first deputy speaker of the Catalan Parliament, Josep Costa, and the Catalan government's delegate in Northern Catalonia, Josep Puigbert, also took part in the event.

After his visit to the Maternitat, Puigdemont visited the local town hall and signed the book of honour to leave a record of his visit to Northern Catalonia. During the event he was accompanied by Nicolas Garcia, mayor of the town.

"Justice ends at the Spanish frontier, just 30 km to the south", was the comment in a tweet from Elna by the director of Puigdemont's office, Josep Lluís Alay.

On Friday at noon, the exiled president is to take part in the Catalan Summer University in Prada de Conflent, giving an addrese entitled "Independence, deactivated?". Due to Covid-19, the address, like all of those at this year's Summer University, will not be presented to an in-person audience, but rather, will be streamed on-line.

Editorial Puigdemont and the sudoko of Junts José Antich