Puigdemont explains how they want to "kill" him in Spain

There are many ways to talk about Wednesday's meeting between the Catalan president, Pere Aragonès, and the Spanish PM, Pedro Sánchez. Some headlines have highlighted Sanchez's refusal to countenance an independence referendum, others, the avoidance of setting any specific deadlines. But the Spanish newspaper El Mundo has gone a step further and has taken aim directly at the Catalan president in exile, Carles Puigdemont, who, for his part, refused to remain silent and has denounced how some people want to kill him.

The opening of the Spanish-language news story reads: "To kill Puigdemont, the great hidden objective of the PSOE and ERC negotiating table."

The translation continues: "With the shrewdness of the Spanish (to his displeasure) rascal, Carles Puigdemont understood from the beginning that the negotiating table was an artifact designed by the PSOE to consolidate the strategic alliance with ERC and modulate their common differences and interests, among which was and is his elimination as a political actor," the article begins. 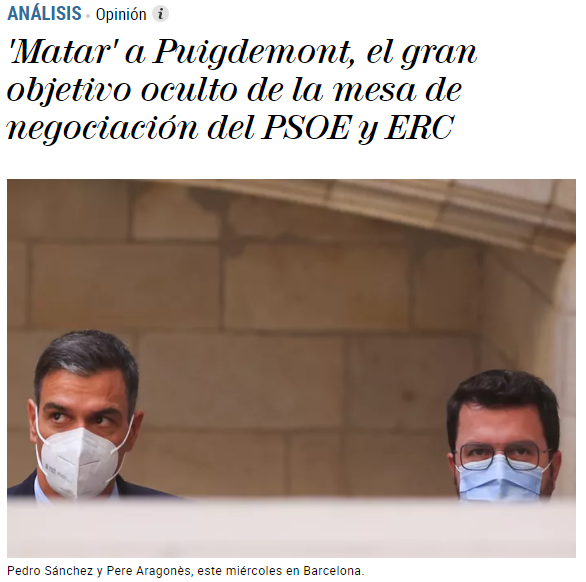 Capture of "To kill Puigdemont, the great hidden objective of the PSOE and ERC negotiating table"

Puigdemont tweeted in English to explain what was going on to a non-Spanish speaking audience: "'Kill' Puigdemont, a harsh expression in a headline in today's Spanish newspaper. They probably think it's a funny joke." The Spanish verb used by the newspaper is matar, which indeed translates directly to English as "to kill".

“I am a target of disinformation and denigration campaigns and death threats, but the best verb they decided to use is ... 'to kill'," says the tweet. Accompanying his words, the headline from the Spanish newspaper. 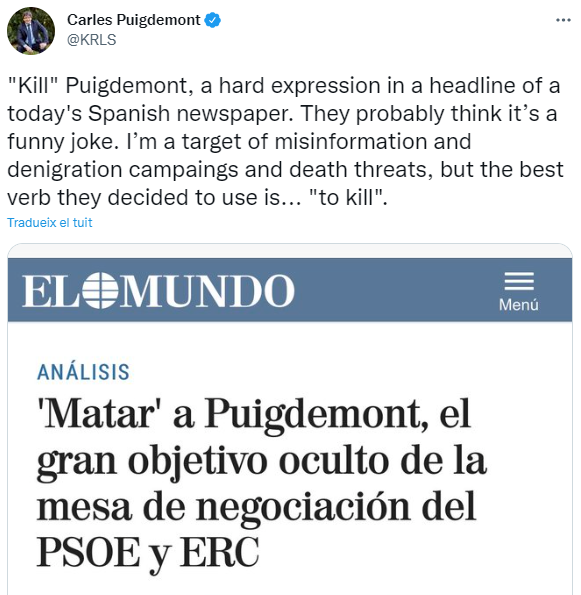 Tweet published by president Carles Puigdemont on the article / @KRLS

Yesterday, Puigdemont denounced censorship at the press conference of the Spanish prime minister, Pedro Sánchez, at the Palau de la Generalitat, in Barcelona, also associating it with the veto on the Junts delegation at the dialogue table because it included non-governmental members of the party, among them, two of the pardoned Catalan political prisoners.

"First they veto Junts, which represents a very important part of Catalan society, and now they prevent the Catalan press from questioning the Spanish PM. And all this happened at the Palau de la Generalitat," indicated Puigdemont.

At the press conference, following directions given by the Spanish government, only Spanish press were able to ask questions and Catalan journalists were unable to, with the only exception of Catalan public television, TV3. The Spanish PM only responded to five rounds of questions from the press, exclusively to journalists he knows from Madrid, one of them being the TV3 correspondent, all hand-picked. The situation was criticized by several Catalan journalists.

Afterwards, the Spanish PM went for a coffee with his Catalan Socialist (PSC) colleague, Salvador Illa, while the dialogue table was meeting at the Palau de la Generalitat. In the end, the dialogue table was attended by Félix Bolaños, Yolanda Díaz, Miquel Iceta and Isabel Rodríguez, for the Spanish state, and only Laura Vilagrà and Roger Torrent - the two ERC representatives - for the Catalan side. Sánchez and Catalan president Pere Aragonès only went to the table to greet the two delegations, after both had held a long meeting previously.