Negotiations between the two main Catalan pro-independence parties ERC and Junts for the formation of a new government led by ERC's Pere Aragonès, have for several weeks pointed a spotlight at the Council for the Republic, the body set up by the Catalan politicians in exile under the leadership of Carles Puigdemont (Junts). At issue is the demand by Junts that the new government should recognize the role played by the Council in moving the independence process forward.

The contention between the two parties on this issue even became the reason for the blockage in negotiations before the first investiture vote. In response, the Council offered to reformulate its governance structure with the aim of facilitating the agreement.

Beyond the controversy, however, the Council has continued to develop the proposals it has being planning and today presented one of its star initiatives, the so-called Republican Digital Identity (ID).

This is an identification system that will be available to all those who register with the Council. It will allow them to take part and vote in debates and initiatives promoted in this area.

A structure of state

Those responsible for the ID initiative admit that the use of this identification system will not be possible - "in the short term" - for bureaucratic purposes in relation to the Catalan government administration, but it will enable "the carrying out of procedures which the Spanish state will not control (or will not know about)".

The aim, as explained in a press release, is to create an "ID document for the Catalan countries" and "prepare a state structure",in addition to creating "community, social cohesion and collective awareness" and "sovereign spaces that empower citizens".

It will be possible to use the ID with a QR code, or have a physical card, for those who wish. Those who want to have one of these two systems can request it on the Council's website or through the application. The QR costs 6 euros and the physical card, 12 euros. 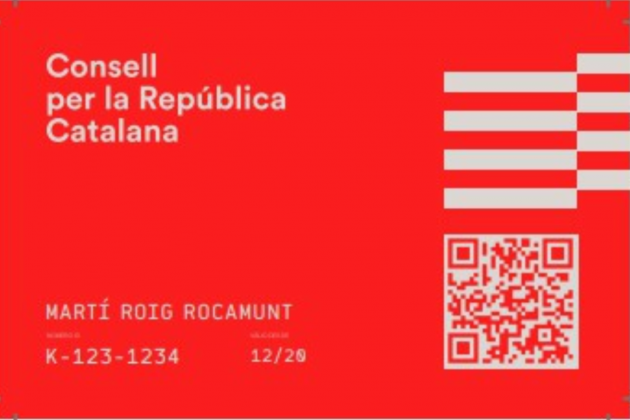 Image of the Council for the Republic's ID card.

The QR, which can be read with the reader on a mobile phone, allows an individual to enter directly into the website or application, identifying themselves quickly, to perform actions such as entry to the data register or voting.

The Council emphasizes that the physical card is not made of plastic but rather from bamboo, a biodegradable material, as an environmentally-friendly measure. It is specified that the card does not expire.

The Council for the Republic assures in its press information that it is working to extend the scope of the card to associations, companies, NGOs, platforms, unions, foundations and more.

What is the Council for the Republic?

As stated in its founding regulations, the Council for the Republic is an institution that aims to "promote political, social, cultural and economic activities aimed at the establishment and materialization of an independent state in Catalonia in the form of a republic."

So far, 92,945 people have signed up to the so-called foundational citizen registry. The only requirement is to be over 16 years old, prove your identity and make a contribution of a minimum of 10 euros.

The Foundational Council is presided over by Puigdemont with fellow Catalan MEP Toni Comín as vice president. Those Catalan politicians who were members of the Catalan government at the time when the Spanish government sacked them under Article 155 of the Constitution, are automatically regarded as members of the Foundational Council should they wish to be part of it. The remaining members of the Council, up to a maximum of 25, are appointed and dismissed by Puigdemont, as president. The composition of the Council's direction is one of the aspects that has caused controversy with ERC.

In the main image, Carles Puigdemont at a Council for the Republic event / ACN