Puigdemont, in Berlin, calls on Spain to change its attitude and negotiate 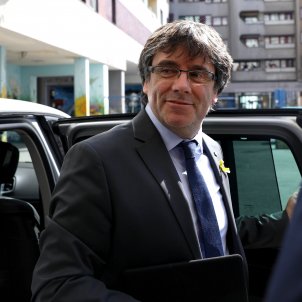 Exiled Catalan president Carles Puigdemont has once again asked Spain to begin dialogue, this time from Berlin, speaking in a packed press conference just 24 hours after he left the German prison of Neumünster. He called for dialogue with no conditions or red lines, in what he described as an "opportunity for the Spanish state to change its strategy". When asked about his willingness to be a candidate for the presidency of Catalonia if the current proposal to elect Jordi Sànchez as new president does not prosper, he said he would not renounce "anything" and discarded the possibility of giving up his parliamentary seat, but at the same time, he called for respect for the rights of the currently-imprisoned member of parliament Sànchez.

Puigdemont, who began his Berlin speech with words for the nine Catalan political prisoners and their families, centred his address on denouncing the situation in Catalonia to the world, as well as calling for the liberation of the imprisoned pro-independence leaders. Before answering press questions, he explained that accompanying him in the Berlin hall were Catalan parliamentarians from the JxCat and ERC groups, in representation of the Catalan institutions "which for the last few months have been experiencing an unacceptable situation under which they have been occupied and taken over".

Next, he denounced the "permanent interference" of the Spanish state in the process of forming a government in Catalonia, the "fictitious narrative that has been constructed to subvert the electoral results" and he urged Mariano Rajoy's government to allow the investiture of Jordi Sànchez as president.

However, he made it clear that today his emphasis was on reiterating the demand for Spain to begin dialogue and negotiation. "We have to ask the Spanish state to change its attitude, to stop putting obstacles in the way of the Catalan Parliament's work. We make this call with the endorsement of the recent resolution from the United Nations Human Rights Committee", he said.

The Catalan president stated that the decision of the UN committee demanding that Sànchez's rights as a parliamentary deputy be respected in the presidential investiture process "offers the opportunity to the Spanish state to change its strategy, to strengthen its image abroad, offering solutions, and to take the first step so that this conflict, which is political, can have a political resolution".

What limits should this dialogue have? "I have put it as a condition that there are no conditions. If you sit down at a table to talk, you have to be aware of your position having to change. With no red lines", he stressed, although also mentioning that "it must be recognized that democratic independence is a very convincing reality".

Puigdemont spoke in Catalan, Castilian and English, but the questions from journalists in different languages caused a moment of chaos when a German journalist complained that he did not understand Catalan; in this instance, Puigdemont completed his answer in Catalan and then repeated it in Spanish. The press conference was held in a civic centre, with Puigdemont seated in front of a huge number of microphones in a room full of journalists and political representatives. There was no symbol or even a flag behind him.

"I have not renounced anything"

When asked if he thought he would once again be a candidate should the investiture of Jordi Sànchez not come to fruition, he recalled that his decision to step back from the candidacy was "provisional". "I have not renounced anything. I have no reason to do so. They chose me for this purpose", he asserted.

In any case, he reiterated on several occasions that "now the task is to invest Jordi Sànchez as president", because he has the right and the international support, and this is the commitment made by Puigdemont's JxCat group.

The Catalan president explained that he will remain living in Germany until the legal process regarding his extradition finishes, even though his wish is to reside in Brussels. 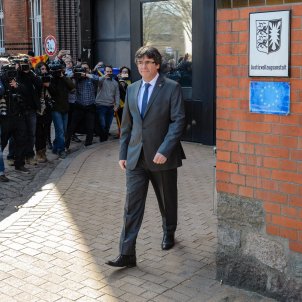 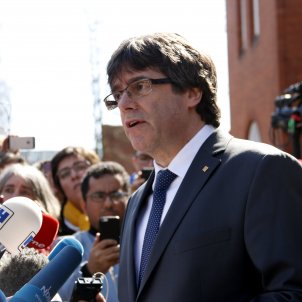