Catalan president in exile Carles Puigdemont has received an invitation to visit the Belgian parliament on Tuesday, and will hold an informal meeting with the parliament's foreign affairs committee, according to Brussels newspaper Le Vif. It is likely that Puigdemont will speak to the parliamentarians about the situation of the Catalan political prisoners, and especially the hunger strike that Jordi Sànchez and Jordi Turull have begun. The hunger strike has made a great impact in Belgium, even to the point that the country's defence minister, Sander Loones, has spoken out to express his solidarity with it.

"Puigdemont will take part in a lunch at the restaurant of the Belgian Parliament, of which he will also be given a guided tour. The programme also includes an "informal audience" of a Catalan delegation with the foreign affairs committee of the parliament. This point does not appear in the official agenda for the committee's meeting on Tuesday", notes the newspaper.

Later, Puigdemont will also be received at the Flemish Parliament, and afterwards a press conference is planned. 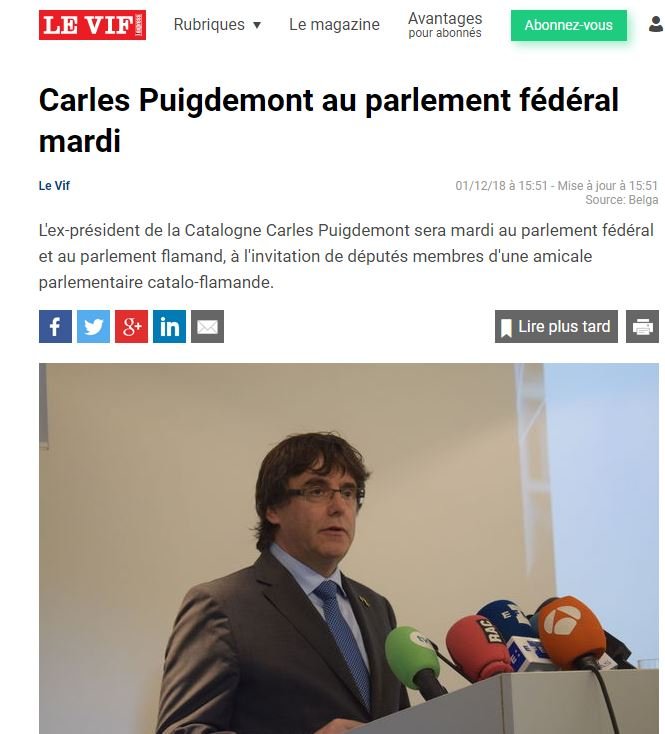 The gestures of recognition which the Belgian and Flemish institutions have made for the Catalan government in exile in recent months have provoked serious tensions with the Spanish foreign minister, Josep Borrell, which even resulted in Flanders recalling its diplomotic representative in Spain. Nine months ago, Spanish pressure led the Belgian parliament to say no to the proposal made by the New Flemish Alliance for Puigdemont to speak before the Belgian legislature. Now, the Belgian parties have accepted a solution under which Puigdemont will meet a parliamentary committee.