The precedent of Torra's 2020 dialogue table, with members from outside cabinet

The crisis unleashed within the Catalan government between coalition partners Republican Left (ERC) and Together for Catalonia (Junts) after ERC vetoed the delegation proposed by Junts for the dialogue table with the Spanish government, with three members who are not members of the Catalan executive, has an important precedent in the composition of previous Catalan delegations that puts in doubt the criteria imposed by president Pere Aragonès and validated by the Spanish government.

After it became clear that Pedro Sánchez might not participate directly in Wednesday's meeting of the table, Junts decided to send a delegation containing only one member of the Catalan government, vice president Jordi Puigneró. The other members that the party has proposed are its vice president, Jordi Turull, the general secretary, Jordi Sànchez - both of them, political prisoners who recently received partial pardons - and the party spokesperson in the Congress of Deputies, Míriam Nogueras. Aragonès vetoed the proposal, which left Junts out of tomorrow's meeting after the government approved only the ERC members, in a vote in which faced Junts abstained.

Looking at the precedents, the first constituent meeting of the dialogue table, which took place in the palace of Pedralbes, in Barcelona, ​​on December 20th, 2018, was certainly a government to government meeting. From that appointment came the declaration of the same name, signed by the two governments, which recognizes the existence of a conflict over the future of Catalonia.

The Catalan delegation was chaired by president Quim Torra, and the Spanish government, by prime minister Pedro Sánchez, who had come to power on June 1st, 2108 after the PSOE's successful motion of no-confidence against the PP leader Mariano Rajoy, a vote decisively supported by the two pro-independence parties: both ERC and, at that time, the PDeCAT. Prior to this meeting in Pedralbes, the two presidents had met in the Moncloa palace in Madrid on July 9th, 2018.

At the Pedralbes appointment, two parallel meetings were held. One, between the two leaders, Sánchez and Torra, and another between two members of each executive. Spanish deputy PM Carmen Calvo and the minister of territorial policy, Meritxell Batet, on behalf of the Spanish government; the then-vice president and minister of economy, Pere Aragonès, of ERC, and the minister of the presidency and government spokesperson, Elsa Artadi, of Junts, on behalf of the Catalan government. There was a joint photo of all six. 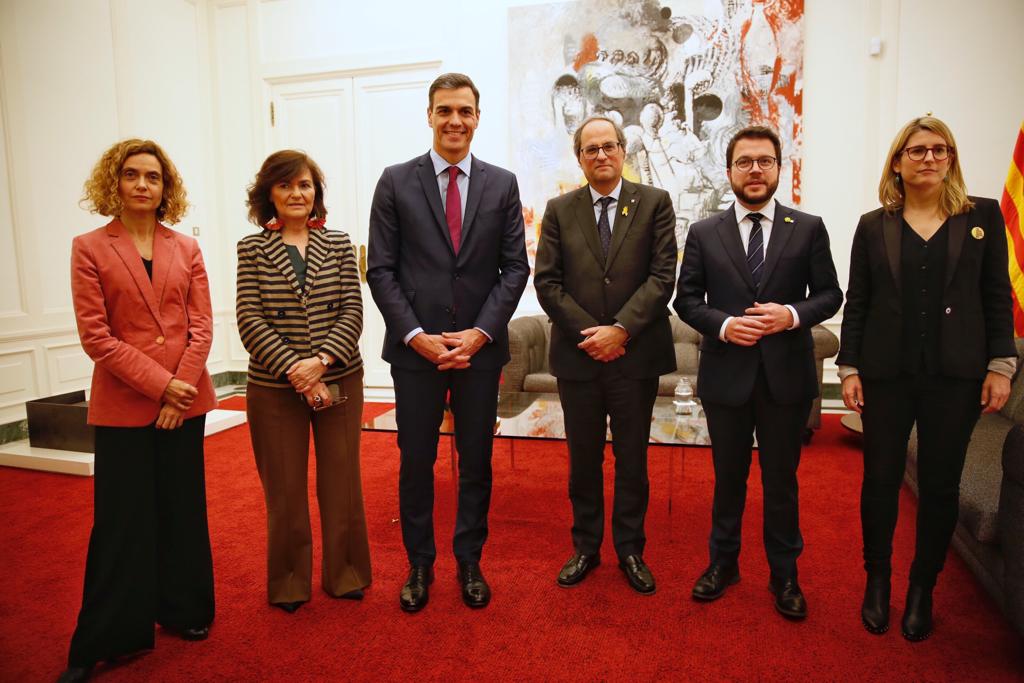 Joint photo of the delegations at the first meeting of the dialogue table in Pedralbes, on December 20th, 2018. From left to right, Batet, Calvo, Sánchez, Torra, Aragonès and Artadi / Sergi Alcàzar

In this first meeting in Barcelona, ​​all members of the negotiating delegations were, therefore, members of the two governments. But this was not the case at the next meeting - and the last one held so far - in which the composition included, in the Catalan case, members who were not part of the government. On February 26th, 2020, two extended delegations met in the Moncloa palace, with eight members each, headed by the Spanish prime minister and Catalan president. Who were those members?

Who was at the Moncloa at the last meeting of the table?

The delegation of the Spanish PSOE-Podemos coalition government, formed after the general elections of November 2019, was of the highest level and included in addition to Sánchez, the first deputy PM, Carmen Calvo (PSOE); the second deputy PM and general secretary of Podemos, Pablo Iglesias; the finance minister and government spokesperson, María Jesús Montero; the minister of transport, José Luis Ábalos; the minister of territorial policy, Carolina Darias; the minister of universities, Manuel Castells, and the minister of health, Salvador Illa. 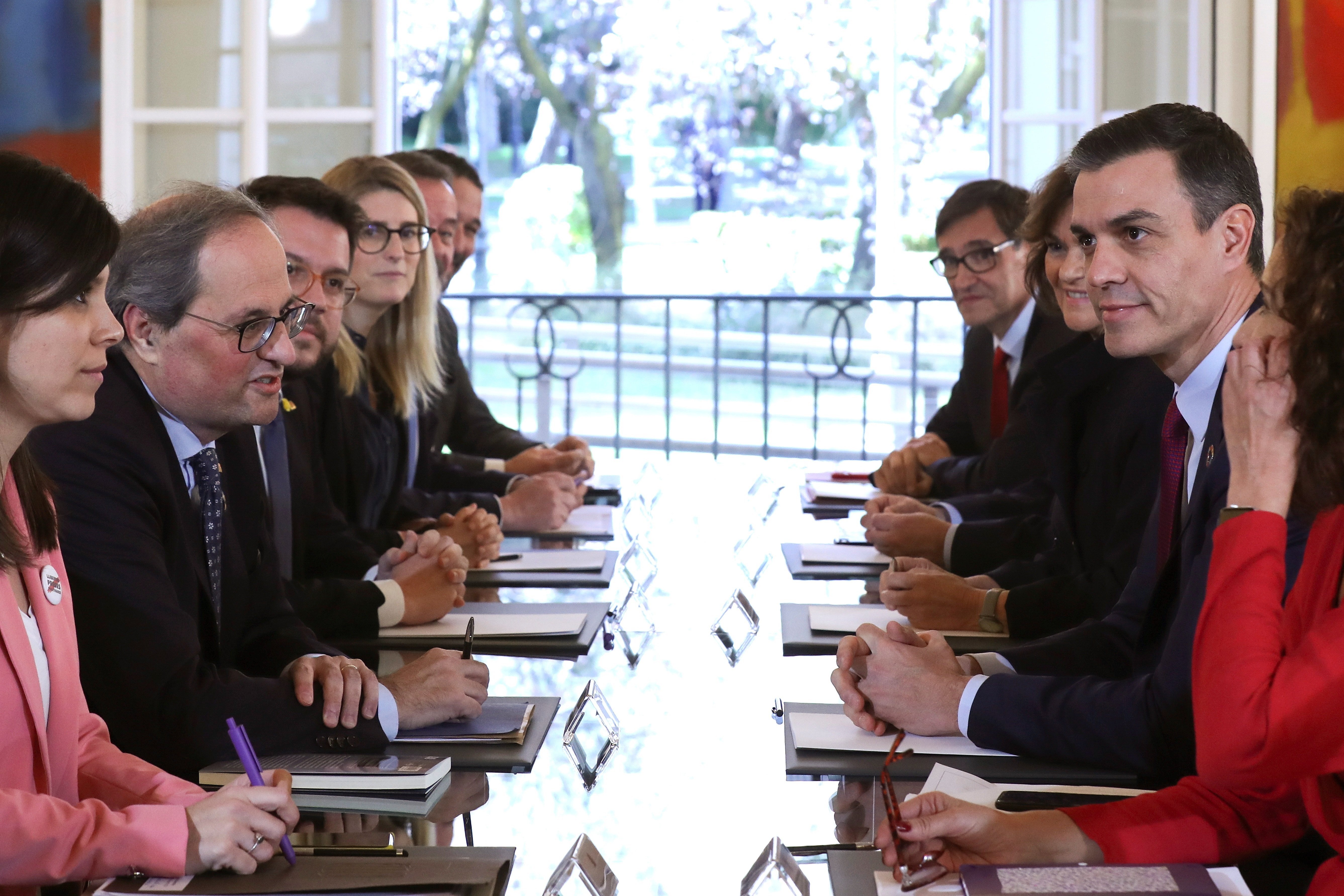 Vilalta, Torra, Aragonès and Artadi - on the left - opposite Montero, Sánchez, Calvo and Illa, at the meeting of the dialogue table in the Moncloa palace on 26th February, 2020 / EFE

In the case of the Catalan delegation, however, not all were members of the government. In fact, only half of them were: Torra, plus the then-vice president and minister of economy, Pere Aragonès, the foreign affairs minister, Alfred Bosch - both of ERC - and the then-digital policies and territorial minister, Jordi Puigneró, of Junts.

Two other members of Junts who were present were not ministers: Elsa Artadi, who was an ordinary Catalan MP, and Josep Rius, director general of analysis in the presidency department and former head of the offices of both president Carles Puigdemont and president Torra. On behalf of ERC, the meeting was attended by Marta Vilalta, also an MP and party spokesperson for ERC, and Josep Maria Jové, former secretary general of the vice-presidency, economy and finance under Oriol Junqueras in the Puigdemont government and, at that time, an MP. Jové was prosecuted two days after the dialogue table meeting by the Catalan High Court in relation to the organization of the 1st October referendum, so his presence in the Madrid meeting exposed Sánchez to a storm of criticism from right-wing parties PP, Vox and Cs.

ERC sources assert that the situation is not really comparable because when the table met in February 2020, president Torra had already announced, on January 29th, a plan to call elections to the Catalan Parliament after the approval of his government's budget. The pre-election period could therefore justify the mixed nature of the Catalan delegation, made up of members of the government and the parties. However, ERC also recently raised the possibility that at the next meeting of the table there could be politicians who are not members of the government, starting with its own party leader, Oriol Junqueras.

On June 28th, Pedro Sánchez himself, in an interview with radio station SER, vetoed Junqueras's presence at the table. On May 31st, with Aragonés already invested as the new Catalan president, ERC had publicly demanded the presence of former vice president Junqueras at the dialogue table. "It's undeniable that we would very much like him to be able to be there, obviously," ERC's Marta Vilalta had stated, when the nine pro-independence political prisoners, including Junqueras, were on the verge of being partially pardoned by the Sánchez government.

Main photo: Meeting of the Spain-Catalonia dialogue table at the Moncloa palace on February 26th, 2020 chaired by Sánchez and Torra, including members of the Catalan delegation who were not part of the government / EFE