Catalan ministers Clara Ponsatí, Toni Comín and Mertixell Serret took part in the demonstration called in Brussels this Sunday in support of the independence of Catalonia, the freedom of its prisoners and the return of those in exile - among them, the ministers themselves.

The protest was held in the Belgian capital's Parc del Cinquentanari and attracted about 1,500 people. As well as the ministers, Catalan MEP Josep Maria Terricabras, of ERC (Catalan Republican Left) attended, but there was no sign of either president Carles Puigdemont or minister Lluís Puig. The event had been organized by the Benelux branch of the pro-independence group ANC (Catalan National Assembly), although Catalans resident in France, Germany and the United Kingdom also came, as well as a group of Flemish nationalists, sympathizers of the N-VA (New Flemish  Alliance). 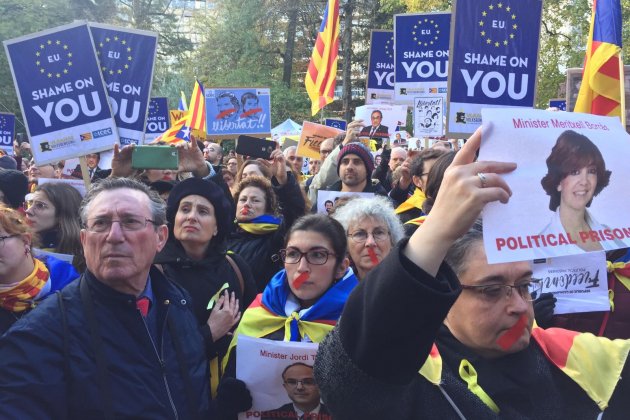 At the protest, ANC member Liz Castro called on the European Union to listen to the Catalans, because we “have the right to decide our political future", while European representative Josep Maria Terricabras pointed out that the EU “needs us and we need the EU”, so that we “can build a new Europe”.

All three ministers spoke. Meritxell Serret went first, affirming that for “our colleagues who are in exile or in prison, your support is very important”. “Yesterday the whole world saw that the people of Catalonia are standing strong in spite of the repression”, she added, pointing out that “our strength will carry us to win where we always win, at the polls”. And  “I urge you not to give up, to keep going”, she concluded.

In his speech, minister Toni Comín recalled the imprisoned ministers, “who, every evening when they go to sleep cannot kiss their kids goodnight”, referring to them as “political prisoners”. “Have you ever seen a million people getting out onto the street when they put a criminal in prison?" he asked, adding: “This is what shows that they are political prisoners”. Because of this he made an appeal to convert the “illegal and illegitimate elections into legitimate”, because “in Catalonia there is a struggle underway between authoritarianism and democracy”. “Europe has a duty to listen to us”, he summed up.

In her address, education minister Ponsatí asked Catalans living in Brussels and other European cities to “tell people that in Spain there are political prisoners”. “It is incredible that policies like those of Putin and Erdogan are being executed from Madrid”, she affirmed, adding that “when you start to have political prisoners, you stop being a democracy”. The minister called for a huge turnout for the 21st December elections and ended her speech calling for “democracy and freedom for political prisoners”.

At the event, chants of "freedom", "independence" and "Catalan schools will always be of ours" were heard, and the event finished with the singing of the Catalan national anthen Els Segadors and the protest song 'L'Estaca'. A large number of estelada independence flags were on show, although also visible were the flags of Flanders, Wallonia and the European Union. In evidence as well were posters calling for freedom for the imprisoned ministers, along with others taking the European Union to task: "Shame on you".