The atmosphere was rarified, as Saturday's session of the Catalan parliament got under way. What had been scheduled as the second vote in the swearing-in process for Jordi Turull, of the Together for Catalonia (JxCat) list, candidate to be the new president of Catalonia, had been disrupted completely on Friday when the candidate himself was ordered into immediate preventive prison by Spain's Supreme Court. Spanish judge Pablo Llarena thus altered the political calendar, sending Turull to prison along with four other Catalan deputies, leading the speaker, Roger Torrent, to suspend the session to vote on a new president. Nevertheless, parliament met, and speaking time was given to all parliamentary parties in a session which served to highlight the democratic abnormality under which the Catalan institutions are operating, as well as being a tribute to all the current Catalan political prisoners and exiles - most of them voted in as Catalan MPs in last December's election.

Jordi Turull's wife and daughters were brought to the parliamentary rostrum and strongly applauded, although the unionist parties did not participate in this, once again showing the division of the Catalan chamber. Particularly notable was the indifference shown by the leader of the Citizens (Cs) group, Inés Arrimadas. In addition, the Popular Party (PP) refused to participate in the parliamentary session, alleging that the plenary was "a legal fraud" because the original presidential investiture session had not been cancelled before being converted into a special plenary session. 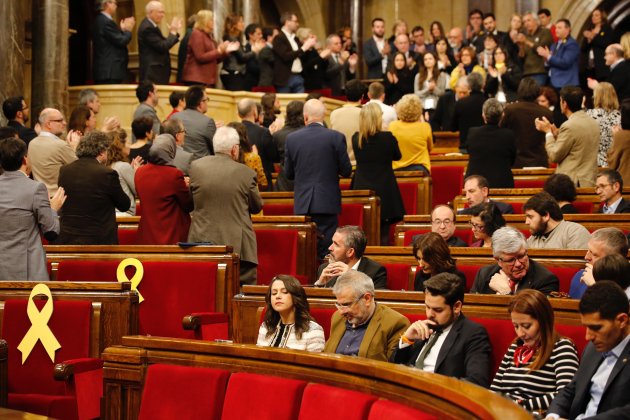 The three pro-independence parties, Together for Catalonia (JxCat), Catalan Republican Left (ERC) and the Popular Unity Candidature (CUP), gave emotional discourses in homage to their imprisoned and exiled colleagues, with strong condemnation of Spain's repression. JxCat MP Quim Torra addressed the parties that he called "the article 155 block". He asked: "Don't you feel uncomfortable with your dehumanized reactions to what is happening?". In addition, he told them that, if it was them being persecuted for their ideas, they would have his support.

On behalf of ERC, spokesperson Sergi Sabrià said that with the new imprisonments "the state is spitting in the face of two million Catalans." In response to this repression, Sabrià wanted to give a warning to Spanish democrats, urging them to make a choice between "the state - or democracy." "They want to win in the courts what they lost, once again, at the ballot box", Sabrià continued, warning that "democracy in Spain has, definitively, been suspended and there is no room for people to sit on the fence."

Finally, CUP deputy Natàlia Sànchez challenged the unionists directly: "Buy yourselves a mirror and see the disfigured face of dehumanization, the humiliating face of all possible indecencies and the smoking ashes of the democratic state." In addition, she accused judge Llarena of malfeasance and asserted that what is underway is a coup d'état. "The state now refuses to accept the results of elections which they themselves imposed," she added.

The new imprisonments and journeys to exile forced on Catalan parliamentarians were also made evident in the parliament by the addition of more yellow ribbons, placed in the seats of those forced to be absent. Thus, along with the ribbons situated in the places of president Carles Puigdemont, exiled, and Oriol Junqueras, who has been imprisoned for almost five months, there are new ribbons for ministers Jordi Turull and Josep Rull, who were put into Madrid's Estremera prison on Friday, and for Marta Rovira, who has sought exile in Switzerland.

Meanwhile, the Catalan socialists (PSC) and the left-wing Commons (CeC-Podem) group, offered their own interpretations, demanding the construction of large majorities in order to overcome the current political situation. PSC leader Miquel Iceta said the new jailings of Catalan politicians were "disproportionate" and called for a political solution that is accepted by "massive majorities". In this regard, he believes that the situation in Catalonia is "the most significant [threat] to democracy since 1981", referring to that year's attempted military coup in Spain, and he called for an agreement to "advance in the paths of dialogue". Iceta called for the recovery of the Catalan institutions of self-government, despite the support of his own party for the application of article 155, under which the Madrid government took direct control of the Catalan government.

Commons leader Xavier Domènech adopted a much stronger tone against the Spanish state, saying that Spanish authorities are "judging ideas, not actions" and that "there is no justice, but rather the will to remove political and social leaders from public life", quoting fragments of the indictment issued by Supreme Court judge Pablo Llarena to support his assertions. Domènech also called for the formation of large majorities against repression, but also against the application of article 155, and demanded a broad democratic front - from the far-left CUP to the moderate PSC, and from Catalan cultural group Òmnium Cultural to the trade unions. "The cause of freedom and democracy has to bring us all together based on a huge generosity", he declared. 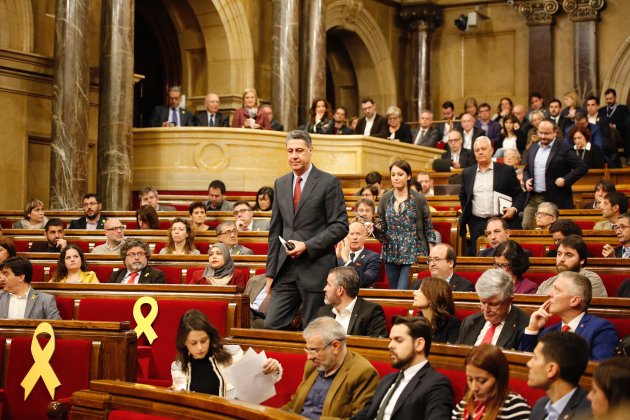 "They have lost, they have failed"

In an opposing line, Cs leader Inés Arrimadas was critical of the pro-independence leaders who had been warned that laws could not be broken and asserted that "they thought they lived in impunity and immunity." She asked the independence groups to reconsider and accept that they "have lost, they have failed". In addition, Arrimadas criticized Catalan politicians in exile, because, she said, "there are people who cannot flee" - such as those who are self-employed or in what she called "broken families". She accused the independence movement of telling the world about the "people of Catalonia" while "excluding half" of society.

The PP had abandoned the chamber and, therefore, did not take part in the speeches.

The parliamentary sitting did not vote on the selection of the new Catalan president due to the absence of jailed candidate Jordi Turull, and the session ended with an institutional statement made by speaker Roger Torrent, calling for a common front against the authoritarianism of Spanish prime minister Mariano Rajoy.