Major Catalan cultural association Òmnium Cultural has launched a legal and international offensive against the abuse of powers in the Spanish state and has placed the Crown as its first objective. Òmnium president Marcel Mauri announced this Friday that the organization has urged the Swiss government to block the accounts held by Spanish king emeritus Juan Carlos I in that country, and that today the group has filed a criminal complaint against the former monarch in Spain's Supreme Court for offences of corruption, fraud and money laundering.

Moreover, the new legal case will have important legal effects for the Crown. Although Spanish public prosecutors are already looking into the corruption allegations against Juan Carlos, the mere initiation of the judicial procedure which the Catalan group's action will "necessarily" set in motion means, according to the complaint, that the case will pass to the Supreme Court's criminal chamber and cease to be solely a prosecutor's investigation. In addition, the complaint will freeze the statutory time limitation on prosecution for the alleged acts on which it is focused, some of which occurred 9 or 10 years ago, and thus are about to expire.

This action by pro-independence Òmnium is part of a campaign to denounce what Omnium sees as Spain's democratic failure. Mauri explained that it is a response to the state's repression of the 1st October referendum on Catalan independence and the "shameful convictions by the Supreme Court" against the leaders of the independence process, but it is also moved by the democratic deficits that were displayed during the coronavirus pandemic, with the recentralization of powers and the "blatant suffocation of liberties".

"After years of an anti-democratic and corrupt regime, it’s time to bring it down!" urged Òmnium in an advertising spot to promote the campaign.

The criminal complaint calls for Spain's former king Juan Carlos I to be investigated for bribery, influence peddling, prohibited negotiations with officials, offences against the public treasury and money laundering.

The text notes that the investigation currently underway by the public prosecutors at Supreme Court level does not have any effect on the statutory time limitation on prosecution for the alleged crimes. It also criticizes the fact that the prosecution has limited the scope of its investigation and has left out of the case alleged actions for which the former Spanish head of state is being investigated in Switzerland.

The suit presented also recalls that other parties are unable to take part in an investigation if it is initiated by the public prosecutors, and for this reason also, the lodging of a separate complaint is necessary.

The complaint states that the current Spanish monarch, Felipe VI, has acknowledged the existence of these illegal funds in his father's estate, as he has expressed his desire to renounce his inheritance of the funds. It also uses the 2018 conviction for embezzling against the king's brother in law Iñaki Urdangarin, and the involvement of Urdangarin's wife, the Infanta Cristina, as an indication of how the figure of the head of state can be used as an instrument for the illicit accumulation of wealth and a means of taking power in political and economic spheres.

As for the issue of the king's inviolability, the suit asserts that the figure of the monarch has evolved and that an attempt to maintain the current regime in a total and absolute way would move "again to absolutist conceptions of the monarchy that are completely incompatible with formally democratic systems." 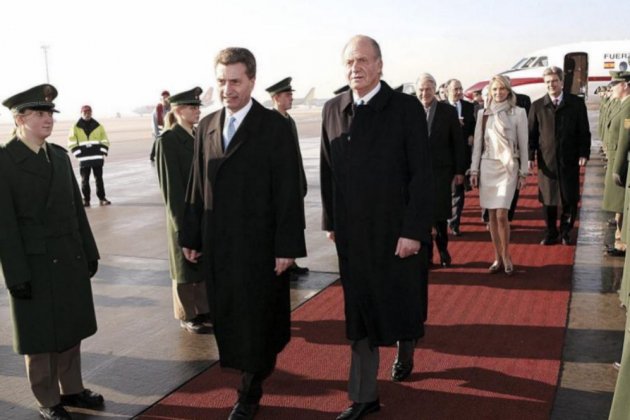 The emeritus king's friend, Corinna, behind Juan Carlos I on an official trip / Gtres

It also lists the 100 million dollars received by the former monarch from the Saudi Arabian finance ministry through the Lucum Foundation in Panama, a sum which would later end up in the hands of Corinna, and it recalls that the Lucum Foundation, until 2019, named King Felipe VI as the beneficiary of the amount in the event of the death of Juan Carlos I.