The current situation in Barcelona, ​​immersed in a period of degradation and dispiritedness, with the city having lost momentum as a European benchmark and whose city council is now spending millions of euros to solve its own mistakes, has provoked the reaction of about eighty Barcelona entities that have joined a movement seeking to put the problems of the city on the table and with the goal of regaining the leadership of the city, with a first test of fire: a mobilization in Plaça Sant Jaume on Thursday 21st October at seven in the evening.

The movement, dubbed 'Barcelona is unstoppable', was launched this Wednesday morning with a manifesto asserting that, although historically the city has undergone great transformations throughout its history, positioning it as a city of reference in the world”, it is now experiencing a “period of discouragement, grayness and stagnation” and, in addition, “institutionally there has been a wish to undo Barcelona's model for success and instead it has been projected as the City of 'No'." To this criticism of the way the city has been run by its current council, led by mayor Ada Colau, the signatories of the manifesto - which invites citizens to join - counter with the assertion that Barcelona is unstoppable and will not miss any opportunity that allows it to advance as a city”.

'Barcelona is unstoppable' is a transversal platform that is backed by a wide range of bodies, such as the residents' group Tsunami Veïnal, business association Barcelona Oberta, the Union of Sports Federations of Catalonia (UFEC), the National Federation of Students of Catalonia and the Royal Artistic Circle of Barcelona, ​​among many others. In addition, the platform has attracted groups, individuals and associations from a range of sectors and sensitivities such as culture, trade, education, solidarity groups, sport, health, urban planning, entrepreneurship, catering and tourism. All in all, they are a broad representation of civil society, of Barcelonins, united by a commitment to regain the city's leadership. 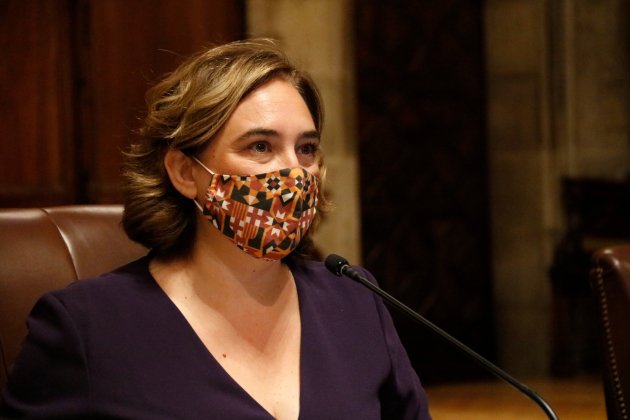 The mayor of Barcelona, ​​Ada Colau, at the last city council meeting / ACN

The manifesto can be signed from this Wednesday morning on the ‘Barcelona is unstoppable’ website, where the full list of affiliated groups and sponsors can be found, expected to grow in the coming days. The movement has also established social media presence on Instagram, Facebook and Twitter with the account name of @bcnesimparable, through which messages will be distributed on the current direction of Barcelona city and the issues that are now all too present such as cleanliness, law and order and mobility. The campaign hashtag is: #BCNesImparable.

Against the Barcelona of 'No'

In the face of the image of the “City of No”, the 'Barcelona is unstoppable' manifesto highlights the importance of ordinary citizens in the city's transformations throughout its history and warns that today the capital of Catalonia is missing great opportunities for social, economic and sustainability progress. That is why the manifesto defends that in order to get it moving again, there is a need to transform “the Barcelona that turns its back and breaks dialogue with the different actors of the city” to turn it into “the Barcelona that listens to its people”.

With the manifesto made public, and more than eighty groups and associations of all kinds having already joined, the 'Barcelona is unstoppable' movement is aiming to get out on the street with a first mobilization in front of Barcelona city council, in Plaça Sant Jaume, called for Thursday 21st October at 7 pm. It will be the first test of a movement that is born with a desire to end the city's drifting direction in recent years.

It will be the first demonstration by this new movement, but there have already been precedents: such as the loud protests from a range of sectors against the mayor on September 23rd coinciding with the start of the La Mercè festivities, the whistles and jeers that Ada Colau herself received at the Gràcia and Sants neighbourhood festivals, and the protests in the Sant Andreu district against the controversial door-to-door waste collection system.

Main image: Protests against the mayor, Ada Colau, during the start of festivities for La Mercè 2021, on September 23rd. / Carlos Baglietto