The pressure from Spain to amend the European Arrest Warrant (EAW) system and introduce the possibility of automatic extradition for crimes against the constitutional integrity of states which involve violence has today prompted criticisms from MEPs of several countries. Spain's intention in pursuing the matter was seen by some as serving its own self-interest, and the European Parliament's debate which began with the presentation of the report on the matter by MEP Javier Zarzalejos, of Spain's Popular Party (PP), was overshadowed at times by the situation of the pro-independence Catalan politicians in exile, while EU justice commissioner Didier Reynders looked on.

Spain's interest in this issue was illustrated clearly enough by the fact that of the 22 MEPs who took part in the debate, eight were from the Spanish state, including both the presenter and the chairman of the Justice, Freedom and Security committee in which the initiative was promoted, Juan Fernando López Aguilar. In support, two representatives of the Spanish Socialists (PSOE) spoke, as well as MEPs from Spanish political groups PP, Ciudadanos, UPyD and Vox - with the last-named party asserting that the automatic extradition should not require the added element of violence - while the pro-independence Catalan MEPs from JxCat and ERC, Clara Ponsatí and Diana Riba, spoke against the motion.

However, among the other MEPs from around Europe taking part, there were also voices that denounced the attempt of the Spanish state to use this reform in its own interest and the damage which, as a consequence, could be caused to the EAW mechanism.

"One state's conflicts of interest"

French Greens MEP Gwendoline Delbos-Corfield lamented that "Spain's national interests" had been taken into account in the proposal "to the detriment of the global good". She warned of the problem of introducing crimes against constitutional integrity in an EU with constitutions that are so different that it could make possible very broad interpretations, and warned: "We cannot allow conflicts of interest in one member state to have an impact throughout the EU".

Irishwoman Clare Daly began by admitting that there were positive aspects in the reform package, before adding: "So why in God's name are we undermining that good work by the politicization of this report by elements opposed to Catalan independence?" She suggested that the planned removal of the double criminality requirement in the EAW for constitutional offences, was exactly the wrong response to Belgian and German courts' rulings "that the 'crimes' of the Catalan politicians were not actually 'crimes'".

Daly, who has spoken out on other occasions against the persecution of the independence movement and Spanish police excesses in Catalonia, has warned that such maneouvres must be unacceptable. "Have you not learned from history, you cannot suppress a movement through repressive measures. Fundamental rights apply to everybody, including Catalans."

The Belgian MEP who is vice-president of the European Conservatives and Reformists group, Assita Kanko, also accused the Spanish government of trying to use the European Arrest Aarrant to serve its own interests, instead of reforming it for the benefit of the common good. Kanko called for any reforms to begin with "building back trust between member states and increase transparency in judicial independence."

To the voices of these MEPs were added those of the European representatives of Catalan pro-independence parties Together for Catalonia (JxCat) and Catalan Republican Left (ERC).

Ponsatí's alert to the Justice Commissioner

Clara Ponsatí recalled that Germany and Belgium have both ruled against the European Arrest Warrants aimed at the pro-independence leaders; and that the Brussels Court of Appeal has expressed its view that the presumption of innocence is not guaranteed in Spain; and that Spain is disobeying the United Nations Working Group on Arbitrary Detention. Given all that, said Ponsatí, turning to the European Commissioner for Justice, "the problem is not the European Arrest Aarrant but the political contamination of justice in Spain and that, Mr Reynders, is your business. It is not an internal matter. You should take care of the rule of law in Spain."

ERC's Diana Riba warned that there are still European countries with obvious shortcomings in judicial matters and the debate on the EAW should focus on procedural guarantees and not on obtaining fast-tracked arrests. For this reason she warned that reforming this mechanism cannot serve "merely to satisfy the repressive desires of some".

"We are risking the credibility of this Parliament," she warned, stressing that adding crimes against constitutional integrity to the list of direct extraditions "will not facilitate the arrest of Catalan leaders but will open the door to unjust or arbitrary extraditions for those states who are not so keen on the European values ​​of justice and liberty".

In presenting the report, the PP representative Javier Zarzalejos insisted that "handover must be the general principle" in the face of a European Arrest Warrant and that the refusal to execute it must be the exception, and must only take place under restrictive and duly substantiated circumstances.

Among the ten cases he raised that should include the European order for automatic handover, he cited, in addition to the crimes against the constitutional integrity of states, crimes of tax evasion, hate, ecocide, crimes against public order, crimes against humanity and war, among others.

The Spanish Socialist MEP who is chairman of the commission that promoted the report, Juan Fernándo López Aguilar, warned that the time that has gone by since 2002 when the arrest warrants mechanism was passed and the enlargement of the EU since then, has seen "the erosion of the principles of mutual trust and mutual recognition on which it is based", and for that reason the Commission of Justice, Freedom and Security that he presides had impelled the report to reevaluate and re-promote the EAW proposing to incorporate new elements, among them, the constitutional integrity of states.

The aim, he said, is to "overcome restrictive denial and ensure that in no case does the guarantee of fundamental rights enable a covert examination of the quality of judicial organization, or the competence in judicial affairs, of the state making the demand".

The Justice Commissioner has stressed that the list of crimes as it currently stands "covers most crimes that states consider serious" but has assured that the Commission will analyze in detail the proposal made to it by Parliament. 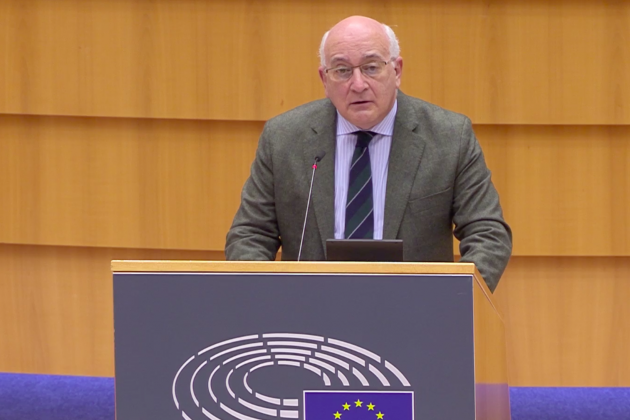 Above: Spanish MEP Javier Zarzalejos (PP) in the European Parliament.