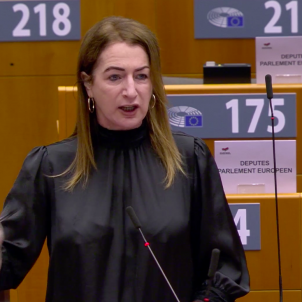 Irish MEP Clare Daly has made a powerful complaint to the plenary session of the European Parliament, denouncing that key content on the Catalan pro-independence leaders, jailed by Spain, was censored from the report on fundamental rights in the EU passed by the parliament's Committee on Civil Liberties, Justice and Home Affairs. Specifically, said Daly, in the report's explanatory statement, all reference to the "Catalan parliamentarians jailed for more than 10 years for organizing a democratic plebiscite" has been expunged. The text was removed following pressures from the major groups in the European chamber, and Daly, the report's rapporteur, will now vote against it in the plenary. In her speech today, she switched to Catalan to make key points in her argument.

"George Orwell said that if liberty means anything at all, it means the right to tell people what they do not want to hear, and it's obvious that there are people here who do not want to hear about Catalonia," she said in Catalan, immediately repeating the sentence in English.

Last week, the European parliamentary groups groups to which Spanish parties PP, PSOE and Ciudadanos belong - that is the European People's Party, Socialists and Democrats and the Renew Europe group -  challenged the report's explanatory statement and forced it to be removed from the text. And this morning, the strong protest against this action by the Irish MEP, a member of the European United Left group, prompted some of the representatives of the house's majority groups to respond.

"I'm not surprised that they wanted the text removed", said Daly in Parliament, "because it is an indictment on the Spanish state and the EU." She criticized that a text that deals with freedom of expression has itself been redacted, because it had "the audacity to explain that there are parliamentarians in prison" for organizing a democratic vote.

The use of the judicial system to silence opposition

Thus, said the Irish MEP, the action taken is precisely an example of what the report condemns: "I'm sorry, but if that doesn't equal the use of a judicial system for political purposes to silence an opposition, then I don't know what does". “The big groups couldn’t stand the truth,” she denounced.

Nevertheless, said Daly, the fact that the text has been cut has caused even more interest in it to be aroused. The explanatory statement is being reproduced as a booklet in English, Spanish and Catalan.

Censorship will not weaken them

"Censorship will not weaken those you seek to silence, but will make them stronger. Their time will come," she said, again in Catalan.

Daly asserted that fundamental rights must transcend political interests and game-playing. "They should be the great equaliser, no matter who you are, or what country you are. If we ignore that, it only leads us into a cul-de-sac," she warned.

The MEP went on to denounce that the report also avoids talking about Julian Assange, the situation of migrants in Greece and Croatia and the protests against the Bulgarian government. And she said she would vote against her own report because she considers it "better not to have a report than one that is weak or hypocritical".

"This is your Europe, and the choice is clear, we either waffle on with generalities about fundamental rights, or we implement the EU Human Rights Charter," she said.

Rejection by the PSOE

Most other Spanish MEPs who spoke out refuted Daly's words or avoided referring to the controversy over the removal of references to the Catalan political prisoners.

Among these interventions was that by the chairman of the Civil Liberties Committee, Juan Fernando López Aguilar, of the Spanish Socialists, who attributed the removal of the text to a question of regulation.

According to Aguilar, Article 55.2 of the regulations warns that the explanatory memorandum to a report must be agreed by the majority of the rapporteurs of the report and be consistent with the content of the resolution. Focsuing on this point in the rules, he argued that the chairman of the committee may cancel the explanatory statement if so requested by a majority of members.

"Things were said in the resolution that are inconsistent with the explanatory memorandum, which includes a reference to a situation which is not only the subject of political controversy but can be refuted with political arguments," he said in reference to the Catalan pro-independence prisoners.

Support from Comín and Riba

Catalan pro-independence MEPs Toni Comín (JxCat) and Diana Riba (ERC) also spoke in the session to denounce the situation and the "censorship" of the report to prevent references to the political prisoners from appearing. the subject