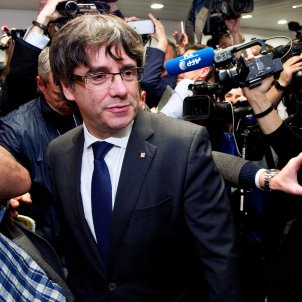 Catalan president Carles Puigdemont will not appear on Thursday to respond to charges in Spain's High Court, according to his lawyer in Brussels, Paul Bekaert, in statements to the Dutch broadcaster NOS, assuring that Puigdemont "will not go to Madrid" because, said the lawyer, he "will not have a fair trial" in Spain. Speaking to the Associated Press agency, Bekaert proposed "that they interrogate him in Belgium".

"It is quite obvious that my client will take a wait-and-see attitude for now", affirmed the Belgian lawyer, to the question of whether Puigdemont would appear to face the Spanish justice system. Spain's High Court summonsed Puigdemont and another thirteen members of the Catalan government to appear on Thursday at 9am, in relation to charges of rebellion, sedition and misuse of public funds.

The lawyer in Brussels had already told the Flemish television channel VRT on Tuesday of the intention to fight any request for extradition to Spain. "We have decided not to make a request for asylum, but to fight any extradition request in the courts", said Bekaert, noting that the processes are "completely separate" and that what Puigdemont is doing is "perfectly legal".

For his part, Puigdemont's lawyer in Catalonia, Jaume Alonso-Cuevillas, has denounced a "trampling on fundamental rights" since most members of the Catalan government and the Parliament's presiding bureau had not received their summonses. In declarations to Catalonia Radio, Alonso-Cuevillas assured that in his 33 years as a lawyer he had "never seen a summons to appear the very next working day" and he complained that more time was required to prepare the requested court declarations.