It's Laura Borràs. The pro-independence Together for Catalonia (JxCat) party has chosen its current spokesperson in the Spanish Congress to be candidate for the presidency of Catalonia in the elections scheduled for 14th February. Borràs, who obtained 75.8 per cent of the support with 2,954 votes in the primaries held over the weekend, won the candidacy ahead of the Catalan government minister for territory and sustainability, Damià Calvet, who received 799 votes, representing 20.5 per cent of the total votes. Votes in blank added up to 3.72 per cent or 145 ballot papers.

Presenting the results, spokesperson Elsa Artadi described the primaries process as an absolute success with a turnout of 76% of registered party members. A total of 3,898 people voted out of the census of 5,128. "This shows that they have been real primaries, with real power to decide," she said.

Virtual ballot boxes were open from 8pm on Friday, to 8pm on Sunday, and the process was completely online. Now, a second round of internal JxCat voting is about to get underway to decide who heads the party lists in each of the four Catalan constituencies.

Borràs said she was "very pleased, emotional and grateful" for the result and thanked those who supported her, in particular mentioning former president Quim Torra, but stressed that "this is not about names, it is about people, determined to keep on along the path that has led us this far." "We are on our way to making history, to make a progressive project for our country into a reality, to be able to walk towards the republic that we want, that we need, to face the challenges of the country," she said. 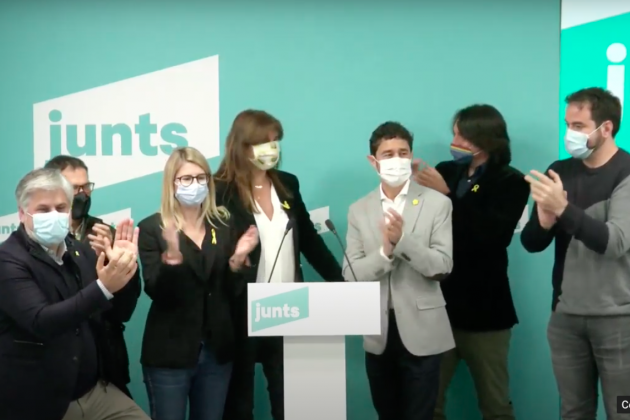 Calvet: "Nobody is giving up here"

For his part, Damià Calvet stated his gratitude for the support he received, remarking on the fact that the party held "real primaries" which have strengthened it as an entity. He congratulated the winner and assured that he will continue his work at JxCat, as he made known to the party president, Carles Puigdemont. “No one gives up here,” he said.