Borràs: "They attack us because we don't give up. They're afraid of a Junts victory"

Catalan pro-independence party Junts per Catalunya (Together for Catalonia) closed their campaign this evening with an undisguised sensation that victory is imminent but an awareness that voter turnout will be decisive. The party's leader, Carles Puigdemont, warned that until the polling stations close "there is work to be done vote by vote", but this evening's speech did not hide the growing feeling that the polls support that Junts have managed to reverse the earlier voter predictions.

"We are the ones that have made people most uncomfortable. We have received many attacks. Attacks out of hatred, ideological distance, also many attacks out of cynicism, born of resentment and disloyalty. They attack us because they know we don't give up. They're afraid that we will win", warned the presidential candidate, Laura Borràs.

Laura Borràs: "After three years of repression, the PSOE of Article 155 cannot win the elections in Catalonia"

Barcelona's Centre d'Arts Digitals was the setting for Junts's campaign closer. A hugely audiovisual and immersive event, which surrounded Borràs with the screens of hundreds of people who followed the broadcast.

"Message to the world"

The candidate gave a long rollcall of thanks. First, to the political prisoners and exiles, as soon as she took the floor. Then on to her team and her family, her husband, daughter and mother, who were all present at this atypical closing, without an audience.

The Junts presidential candidate asked for the vote of those who are still doubt, those who are angry and disappointed. "Because a clear victory for JxCat is a clear message that we send to the world: that we are here, that we have not given up, it is important that they know, because Spain is not a full democracy, but rather, it is a monarchy devoid of scruples," she said. 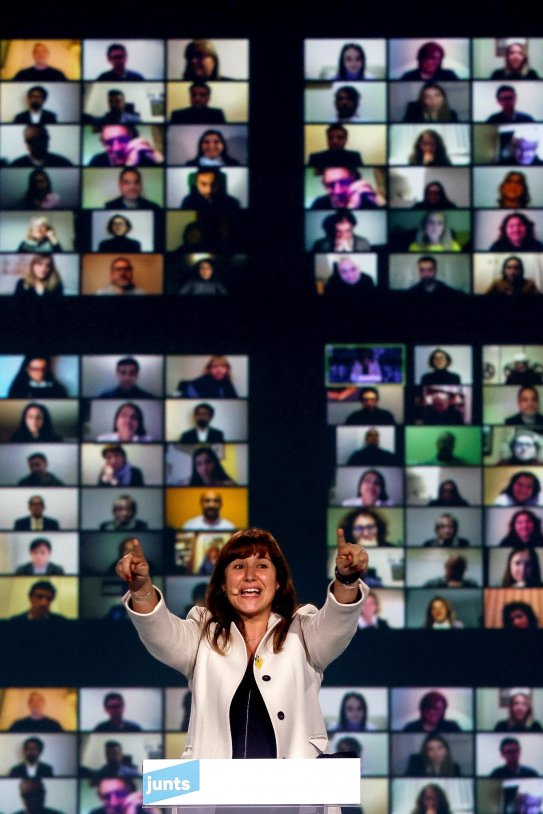 Not only that. Borràs went further and said that a victory at the polls would be a strong message for the immunity issue faced by Puigdemont and MEPs Toni Comín and Clara Ponsatí, to be decided on February 23rd by a vote in the European Parliament's Committee on Political Affairs.

"For me, it is almost like a dream to have the possibility to be the first female president of our country. The best equality policy. This is a very powerful message," said the candidate who this evening only dedicated a passing reference to the party's ERC rivals and their "broad path" to independence. 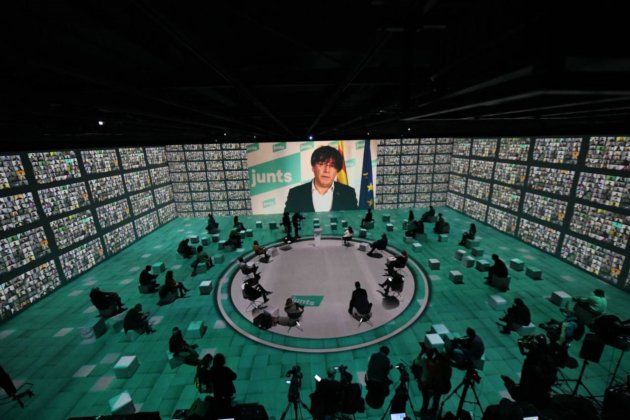 Before Borràs, Puigdemont spoke. The Catalan president in exile, and party leader, recalled that polls suggest that some seats are up in the air, that Junts is vying for a seat with the PP in Tarragona and one with Vox in Barcelona - under the Catalan proportional allocation system - ​​and for this reason he addressed voters of their ideologically-closest pro-independence party, the PDeCAT - voters, he said, who plan to vote for candidates "who have no options to govern or be decisive." He warned them that this vote "may open the door to a tripartite or a PSC government, with Vox support, actively or passively."

Puigdemont was strongly critical of the Socialists, saying that the repression in Catalonia "bears the stamp of the PSC." "Without the PSC, Miquel Iceta and Pedro Sánchez, there would not have been a 155, nor political prisoners, nor exiles. Let them not come and try and swindle us now," he warned.

Borrell and the regime of '78

He also had words for the EU foreign affairs representative, Josep Borrell, who has ended up becoming one of the themes of the Junts campaign. He recalled with irony the face which Borrell offered while listening to Toni Comín's speech in the European Parliament yesterday. "That look that he gave, which represented the regime of 1978, we can ensure that Felipe VI puts on that expression too, and his choir in Vox, the PSOE and the PSC," he suggested.

"They know that your vote is the winner, it is the vote of victory, that it can beat those who want us humiliated and surrendered. We need this "no surrender" of the Catalan republic to sound in all the polling stations", he claimed: "If we go to the polls together and vote together the message they will have on Sunday evening will be an uproar that was not expected," he announced.

The rest of the event featured the interventions of candidates from the other three Catalan constituencies, as well as the political prisoners and exiles, amid a constantly changing scenario. 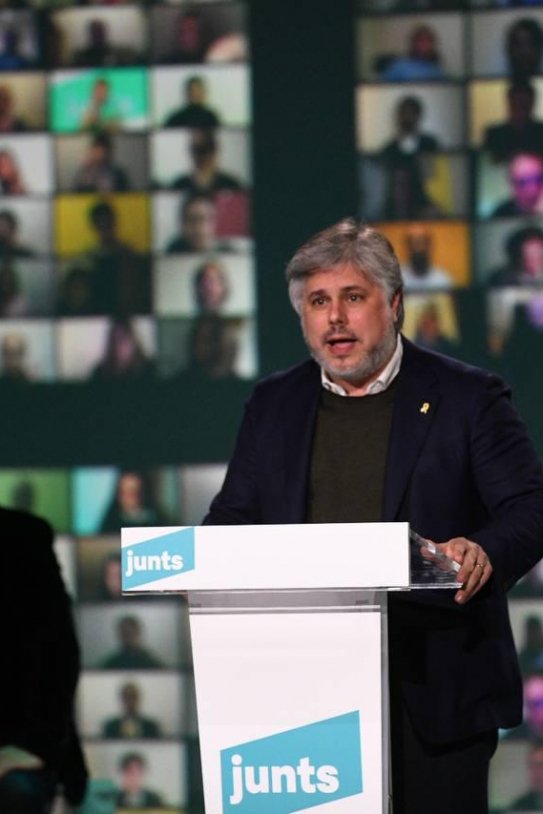 Albert Batet, head of the list for Tarragona / Julio Díaz

The candidate for Tarragona, Albert Batet, warned that every vote counts on Sunday and that if Junts wins in Tarragona, it wins in Catalonia: "On Sunday there are only two options, a victory for Junts or a victory for the PSC; either Borràs or Illa , either Puigdemont or Pedro Sánchez".

The head of the list for Girona, Gemma Geis, railed against the Illa effect - "if Illa wins we will have a president who looks like a branch of Madrid", she warned, but also criticised ERC: "We have seen the broad base approach these last years in Parliament, neither the investiture of president Puigdemont, nor the defence of Torra's seat, nor the defence of anything", she added, taking aim at Junqueras's party.

The head of the list for Lleida, Ramon Tremosa, denounced that for decades the Spanish state has forgotten Catalonia and that the elections have been imposed in the middle of a pandemic because the pro-independence activists want them startled and scared". 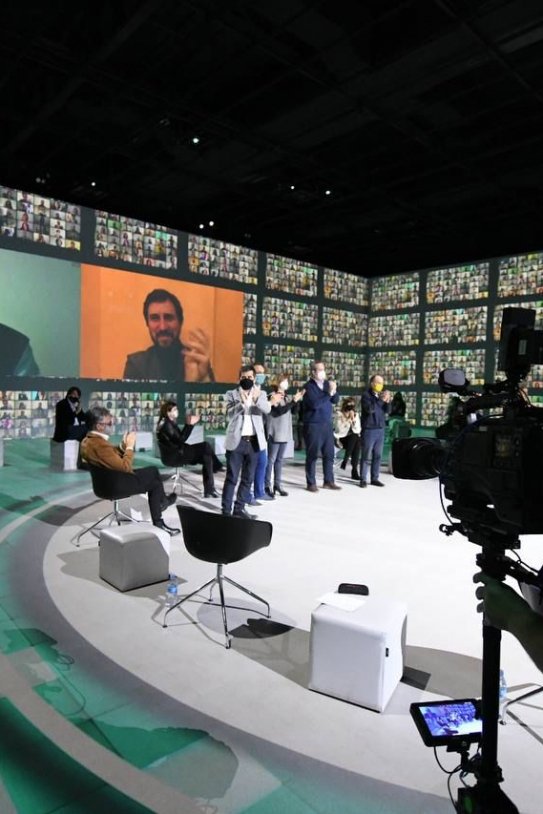 "We are sorry for what we have not done well"

The general secretary of Junts, the imprisoned Jordi Sànchez, said he was convinced that on Sunday the party would turn around a predicted electoral setback "which many people had taken for granted". "Today, according to all the forecasts, not only will we not disappear but we will be in a position in which Laura Borràs could become the president of the Generalitat," he said.

Sanchez, who warned that Catalonia has a lot at stake on February 14th, promised that from victory they will work for unity, from a position of generosity. "We are sorry for all those things that we have certainly not done well in recent years. I ask for understanding for the mistakes and doubts at certain times in the face of state repression, but confidence to move forward together," he urged.

Others to speak were the prisoners - away from their cells under their prison leave rights - Jordi Turull, Josep Rull and Quim Forn, the also-convicted minister Meritxell Borràs, while on screen they were joined by the exiles Lluís Puig and Toni Comín. Turull said that Junts offers transversality, does not make excuses, does not say 'but', and does not want to win merely a few crumbs. "Independence is not achieved by saying 'but'," he affirmed, referring to ERC.

Event presenter, Elsa Artadi, predicted: "This Sunday for the first time a party that has no electoral rights will win the parliamentary elections" - while calling on supporters to keep working for votes and victory until the very last minute.