Leading international media have reacted with surprise and distrust to the Spanish government's decision to apply article 155 of the Spanish constitution broadly and suspend Catalonia's self-government. This response was also affected by the fact that in recent days Spanish socialist politicians had spoken about a more specific, targeted intervention and that major newspapers had also gone along with this prediction. It turned out to be completely wrong.

US paper The New York Times expressed some surprise at the harshness with which Spain has decided to apply article 155 of its Constitution in Catalonia, when the US daily had been told that the application would be more limited. In a report explaining that Spanish PM Mariano Rajoy wishes to remove Catalan president Carles Puigdemont from power, the paper affirms that the decision was "unexpected", and defined it as a "forceful move" to stop the independence movement.

The Times reported on Rajoy's press conference, ending with the explanation that the Spanish PM gave, putting the blame for what has happened on Puigdemont. Rajoy added: "This is something I have never faced in my many years in politics, but I did not choose this adversary".

Major business daily Financial Times has headed its story by reporting that the Spanish government is planning to "sack" the Catalan government. "Spanish prime minister to sack Catalan regional government" said the British daily, adding that it was "an extreme move set to crush the regional independence movement." Very strong words for this business-oriented newspaper.

The French newspaper Libération has affirmed in a report on the deployment in Catalonia of article 155 of the Constitution, that the Spanish government has decided to place "Catalonia under supervision", describing the territory as a "rebellious and insubordinate" region.

According to the French left-wing newspaper, the application of article 155 "has a seriousness which is unprecedented since the end of the Franco regime", and thus even graver than the attempted coup d'état on February 23rd, 1981.

"Some thought that the central power would propose a decaffeinated version of article 155, but that has not been the case", the report has added, referring to the outcome some newspapers had expected.

EU correspondent for 'Libération': "Will they send in the tanks"?

The EU correspondent for the newspaper Libération, Jean Quatremer, considered one of the most influential Francophone journalists in Brussels, has sent a tweet considering the possibility that Mariano Rajoy will call regional elections for Catalonia, and wondering whether, in the case of a secessionist victory, he could send in "the tanks".

"Dialogue, according to Madrid: Dissolution of the Catalan government. And if the secessionists win the next elections? The tanks?" he tweeted.

France's Le Monde newspaper led its news coverage this afternoon with Spain's decision to impose direct rule on Catalonia. "Madrid sets in motion the process to suspend home rule in Catalonia", declared the French daily. "The Spanish Prime Minister, Mariano Rajoy, has announced this Saturday that it will ask the Senate to eliminate the Catalan government led by Carles Puigdemont in order to call new elections, with the objective of avoiding Catalonia's secession", it stated.

The prestigious European paper says that the political showdown between Madrid and the Catalan leadership has gone on for several weeks, "with the organization of a self-determination referendum in Catalonia on 1st October, which was considered illegal by the Constitutional Court". "Mr. Rajoy had asked on Thursday morning for the Catalan authorities to clearly renounce the possibility of a unilateral proclamation of independence based on the victory of "Yes" in the independence referendum", the French newspaper added.

Qatar-based broadcaster Al Jazeera, the most influential media outlet in the Arab world, connected live to the major demonstration in Barcelona this afternoon.

Translation: Al Jazeera giving live coverage on its Arabic channel of the large protest to support the jailed Catalan leaders in Barcelona.

BBC leads with the Barcelona demonstration

The BBC opened its news this afternoon with the Barcelona demonstration to urge the liberation of pro-independence leaders Jordi Cuixart and Jordi Sànchez, making it the top story for the prestigious news outlet.

British TV network Sky News used the headline "Catalan independence" to lead its news bulletin ahead of other international news.

Powerful opening to Sky News at 6pm: It opened with images of the huge crowd in Barcelona with banners of 'Free the Catalan leaders' and 'SOS democracy'

Editorial It was a coup, the constitutional cover was the excuse José Antich 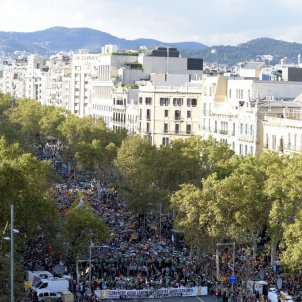