Catalonia's independence movement returned to the street this Sunday in Barcelona to demand the formation of the new Catalan government which will implement the Catalan Republic. "I put myself on the line and I want my representatives to do the same" was the line used by many of the brief speeches that opened the event, given by people who in one way or another have suffered the repression of the Spanish state. The most convincing speech, however, was that by Jordi Pairó, member of the secretariat of the ANC (Catalan National Assembly): "What the hell is happening that they are not telling us?", he exclaimed, among speeches that were full of criticisms of the inability of the pro-independence parties to reach an agreement.

The protest took place at an emblematic location: near the gates of the Ciutadella park, location of the Catalan Parliament, which had been expected to host the session for the investiture of Jordi Sànchez as Catalan president this Monday; finally that session was postponed in order to await the European Court of Human Rights' response to the appeal presented against the Spanish Supreme Court's denial of permission for the jailed Sànchez to attend the parliamentary session.

The event was closed by ANC vice president Agustí Alcoberro, who demanded that the parliamentary majority achieved by the pro-independence parties in last December's Catalan election be made effective with the formation of a government: "We have the majority in parliament to be able to implement the Republic and it needs to be done immediately", he asserted. At the head of the protest listening to the speeches were the former speaker of the Parliament, Carme Forcadell, and ministers Jordi Turull and Josep Rull. However, the current parliamentary leaders of the pro-independence groups were not present. 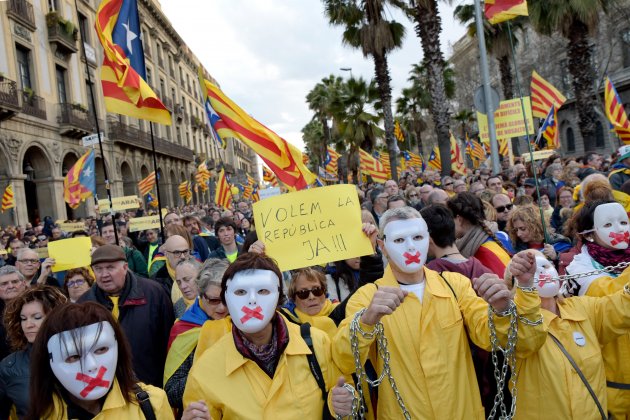 The ANC, immersed in the process of choosing its own new president, was represented by two voices today. Jordi Pairó was the first ANC leader to be heard, making a very strong speech criticising the pro-independence parties which have not yet managed to put a new government in motion. After declaring that "sovereignty is not asked for, it is exercised" and admonishing the political groups for the fact that they have been negotiating normally for two months when the context is not normal, he complained: "What do we want, an autonomous [regional] government? We don't, do we? Well then, let's get a move on!"

"Why did we have our faces smashed and above all why are we receiving reprisals? For nothing?", he asked, demanding an urgent response to the demand for an effective candidate. Pairó warned that the mass of independence supporters know they cannot give an inch before the Spanish state and he commented that Parliament does not seem to have the same determination.

"Only by accepting the consequences of our struggle will we be free to carry on that struggle", he postulated, calling for unity and to "take a stand against the Spanish government".

Alcoberro closed the event with a more institutional speech, recalling the massive vote which the pro-independence parties achieved in December. "As citizens of the Republic, we demand its implementation", he said. ANC sources assured that it was an internal decision to offer this double speech, although it may have been due to the refusal of the current ANC vice president, as acting leader, to deliver a speech that was strongly critical of the Catalan political parties. 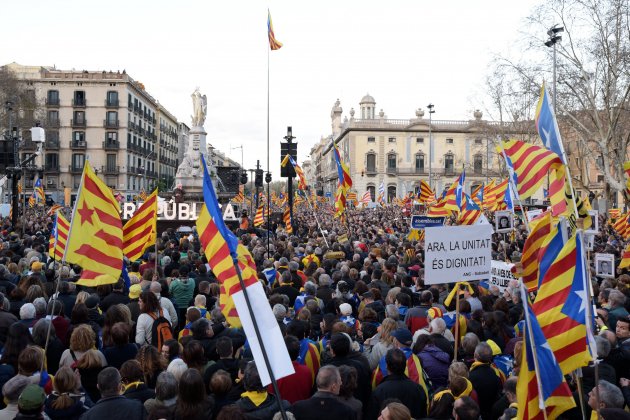 The march had started from Barcelona's waterfront boulevard Passeig de Colom, and protesters walked the length of the Moll de la Fusta before reaching the Pla de Palau square, where the stage was located, near Parliament.

The speeches began with an address by Jordi Peiró - a mechanic who refused to repair a car for a member of Spain's National Police, in protest at the referendum day violence; town councillor Jordi Pesarodona, who was prosecuted for wearing a clown nose while standing in front of the police; a civil servant who helped defend a voting centre on referendum day; a firefighter, Irene Niebla; and a pensioner Josep Morante, who has attended all the mobilizations: "I put myself on the line and I want my representatives to do the same thing", all of them cried, one after the other.

The crowd chanted "Liberty for political prisoners", "Puigdemont, our president," and "This is not justice, this is a dictatorship". The event ended with the singing of the Catalan national anthem Els Segadors with the entire secretariat of the ANC on the stage.

Interview Grau: "I'm sure they are shadowing Puigdemont and without a court order" Nicolas Tomás