Independence, cracked: Catalan government turns to Comuns to save budget

The 2022 Catalan budget has passed its first hurdle in Parliament this Monday. The votes against rejecting the draft bill by ERC and Junts and the abstention of the Comuns were enough to defeat the 'no' from all the other parties, so that the project for next year's spending can continue through the house. However, the vote has revealed a gaping crack in the pro-independence majority in Parliament. The CUP opposed the project despite the commitment to endorse the budget which was included in Pere Aragonès's investiture agreement. Although the economy minister, Jaume Giró, asserted in his presentation that this will not weaken independence movement aspirations, the opposition did not miss the opportunity to poke the open wound.

"Let no one be deluded, let no one see in this a weakening of our aspirations. Sooner or later we are sure to be able to demonstrate the strategic unity of independence and work towards the horizon that the majority of the country aspires to," asserted Giró, who, as he took the floor, celebrated that the budget bill could continue its course, although he admitted that he would have preferred to pass the vote with the support of the CUP.

Today's plenary session was preceded by a difficult morning at the Palau de la Generalitat. At 8:30am, the government held a special cabinet meeting at which the president informed the ministers of the agreement with the Comuns reached after Junts had withdrawn from the talks at the weekend. On Sunday night, Aragonès had already told the vice-president, Jordi Puigneró, of the agreement with the alternative left, non-independence-supporting group. During the government meeting, the Junts ministers asserted that the agreement with the CUP had been ruled out from the first minute and called on Aragonès to continue defending the parliamentary parties behind the 52% of the Catalan pro-independence vote of last February.

Carles Puigdemont's Junts party then called a meeting of its executive to discuss the deal and announced its response half an hour before the start of the parliamentary session with a press conference at which Elsa Artadi called for an emergency meeting with ERC to review their governing pact.

In parliament, it was the deputy Joan Canadell who was given the task of explaining Junts's position. He was blunt, causing ERC deputies to jiggle in their seats and leading Aragonès to make his irritation evident. Canadell did not hide the uneasiness of Carles Puigdemont's party with En Comú Podem whom he accused of having used the government budgets to carry out a "trading card swap", giving support in Catalonia in return for receiving it in the budgets of Barcelona city council and the Spanish government. He told ERC members that the "broad path" they advocate with the Comuns was Spanish autonomous community politics and "the prelude to a new tripartite" - an allusion to Catalonia's Socialist-ERC-Iniciativa government of 18 years ago. Not only that, he asked directly about the current status of the confidence vote to which Aragonès has to submit, according to the investiture pact with the CUP. 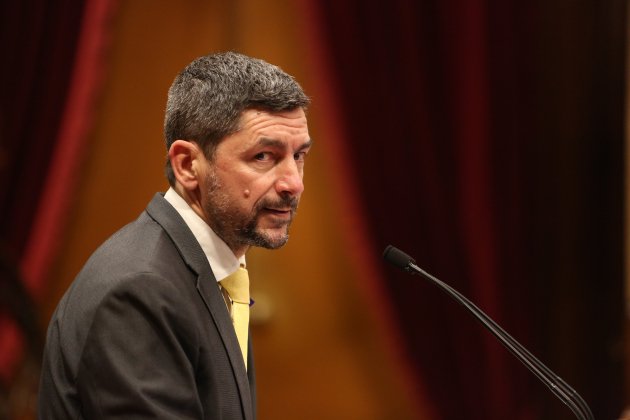 MP Joan Canadell during his speech to Parliament / Montse Giralt

Aragonès had already been forced to respond during his earlier speech on the Gothic gallery about the effect that the CUP's positioning will have on the investiture agreement. The president commented that ERC remains open to negotiation. However, he admitted that today's vote by the extreme-left party will have an impact on the pact. He pointed out that this vote will force a review of the agreement but avoided specifying whether he feels that he is no longer obliged to submit to the confidence motion.

CUP deputy Eulàlia Reguant affirmed that the government has scored a fail mark in its first semester, because "it has let itself get carried away by its eternal sociovergència" - its tendency to join with the Socialists and the former Convergents; she turned directly to Aragonés to warn him that "the investiture was a starting point, not the end of the story" and called for the "construction of a clear pro-independence horizon". 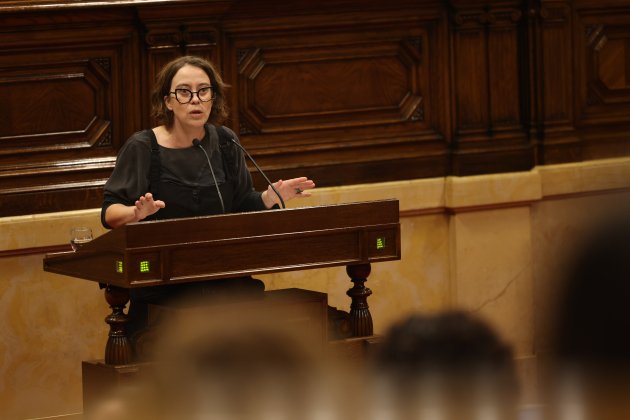 In his reply, Giró rebuked the CUP members who, paraphrasing Trotsky, want to throw the budget in the dustbin of history, where they sent Artur Mas in 2017. "The first commandment of sustainability is not to throw anything away that works," the ministers warned the left-wing party: "perhaps instead of sending so many things to the dustbin of history, they should take advantage of them or improve them, which is something done by politicians who, in addition to convictions, also have responsibilities."

The opposition did not hesitate to inflame the differences between the the pro-independence partners. PSC spokeswoman Alícia Romero said ironically that the vote had sent "most of the investiture to the dustbin of history" and accused Pere Aragonès's executive of "misgovernment, instability and political tacticism". "They have a broken majority. A new scenario is opening up in Catalonia. Where are we going? What future awaits this country," asked Romero, who reiterated that the PSC offered itself as an alternative.

In the main image, the Catalan minister of economy, Jaume Giró, before the lectern in Parliament / Montse Giralt