A group of hooded Spanish nationalists staged a confrontational action on a beach near Barcelona on Monday, removing symbolic yellow crosses in an incident which left five people hurt. The crosses, on the beach of Canet de Mar, 40km from Barcelona, had been set up in the sand by Canet independence supporters as a show of solidarity with Catalonia's political prisoners and exiles, before the arrival of around 20 unionist supporters. Five people were injured, including a town councillor belong to the CUP (Popular Unity Candidatures) party, according to police sources.

The injured CUP councilor, Marc Giménez, told Catalan public television what happened: "They attacked us while we were attempting to stop them from taking away the crosses". Giménez explained that he had been thrown to the ground and while one man held a cross against his neck so that he couldn't move, five others punched and kicked him. Among the other injuries were a woman who was beaten on the head with a cross and an 82 year old man. Some of those involved assert that members of the Citizens (Cs) party were involved in the action, although Cs officials deny this.

Joan is 82 years old. Today, it|he has been attacked by a group of 20 fascists in Canet de Mar. They have been identified and, surprise, the majority militants of @CiutadansCs are.

Translation: Joan is 82 years old. Today he was attacked by a group of 20 fascists at Canet de Mar. They have been identified and, what a surprise, the majority are members of the political party Citizens (Cs). 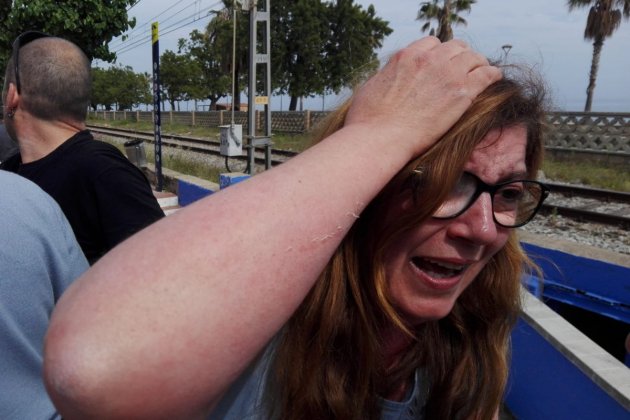 ATTENTION! Fascist aggressions in #Canet when a group of extremists have come to destroy the assembly that the CDR had made on the beach. Three injured people. #AlertaUltra pic.twitter.com/LRjYJtqgOm — Biel LG (@bielopez) 21 of May 2018

Translation: Attention! Fascist aggression in Canet when a group of extremists came to destroy the installation the CDR had erected on the beach.

Marc Giménez reported that among the group of aggressors were activists from both the Citizens (Cs) party and the fascist Falange. "We know them all, they are extremists, not from Canet. They are from different places in Maresme area", he affirmed.

However, the Cs party has denied that either "councillors or party activists" from the right-of-centre political group were involved in the incidents.

The unionists arrived on the beach with their faces covered and carrying flags for the imaginary country of Tabàrnia as promoted by some unionists, as well as waving some pro-independence estalada flags, to cause confusion. Many of those that pulled up the yellow crosses are apparently regulars in this sort of action - the person filming the images calls the names of people he recognises .

Translation: Some council members from the Cs party in the Maresme area cover their faces, in particular one Cs councillor for Mataró, it is the cowardice of always hiding their identities.

The unionists who destroyed the yellow-cross action said mockingly that "nobody has died", while a group of independence supporters responded by saying that "it is Spanish democracy that has died".

A very similar action took place in Calella de Palafrugell when a unionist began knocking down yellow crosses that had been placed in the sand at Port Bo beach. The incident caused astonishment amongst both tourists and locals of the coastal town, who didn't understand why the man had acted as he did.

The people prevent from pulling the crosses off the beach of Portbo of #calella pic.twitter.com/RAGRGYot9H

Translation: People act to stop crosses from being pulled up at Port Bo beach.

A group of people confronted the man, who started to abuse them. "Shut up, dickheads", he shouted angrily at a woman who told him she did not agree with what he was doing.

My total condemnation|sentence to|in these aggressions of the Unionist fascism, which they continue unpunished. Let's not make any concession to|in its|his|her|their provocations. If our civic and no-violenta attitude exasperates them, signal that we go well. Let's not fall in any provocation. https://t.co/9ig00NNdrQ

My complete condemnation of these aggressions by unionist fascism, which continue to go unpunished. We won't respond to these provocations. If our civic and non-violent attitude expasperates them, that is a sign that we are doing well. - Carles Puigdemont

Both the Together for Catalonia (JxCat) political group, and the incoming Catalan vice president and minister for the economy, Pere Aragonès, also responded to the incident with tweets:

From @JuntsXCat we condemn this fascist aggression to peaceful citizens in a vigorous and absolute way. Against the violence and the intolerance #NoEnsRendirem https://t.co/mJPslTI189

From JxCat we energetically and throroughly condemn this fascist aggression against peaceful citizens.  Against violence and intolerance.- Together for Catalonia (JxCat)