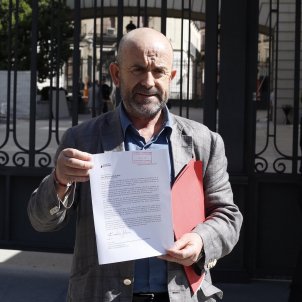 The Associació per a la Recuperació de la Memòria Històrica (Association for the Recovery of the Historical Memory) has presented a legal petition for the law to stop protecting the Fundación Nacional Francisco Franco (National Francisco Franco Foundation) and for the legislation that regulates foundations to "explicitly" prohibit the activities of organisations that "act or run publicity campaigns against human rights" or that "try to make moral figureheads" out of people who violated them. The proposal presented to all the parties represented in the Spanish Congress notes that human rights are an "inviolable limit for democratic societies" and that they "belong to everyone, regardless of their ideology, creed, sexual orientation or cultural background".

The organisation also tells the deputies that the "duty" of the state is "to protect, to foster, to spread and to guarantee human rights as well as observing them", on top of the "persecution and condemnation of those who act against them".

On the other hand, the Association for the Recovery of the Historical Memory remarks on the "special protection" enjoyed by foundations, since donations to them are tax-deductible. This is an "indirect subsidy" and an "aggravation" in the case of organisations which do not respect human rights.