Criticism in Germany of EU's Borrell for "frivolous" comments on Afghanistan

The statements on Afghanistan made by the EU's high representative for foreign affairs, Josep Borrell, are provoking strong controversy in Germany. The country's leading newspaper, the Frankfurter Allgemeine, had no hesitation in describing Borrell as "frivolous" for his shallow treatment of the dramatic international situation that has now been created. The German daily headlines its report with an odd comment made by the EU representative, which apparently sought to relativize the danger posed by the Taliban. “Borrell on the Taliban: 'They seem the same, but they speak better English'”, he reads the title.

"On the new rulers of Kabul, the Spaniard indicates with his usual lightness: 'They look like [the Taliban] did before, but they speak better English,'" notes the Frankfurter. Borrell has been unable to shake off the image of flippancy in the eyes of the EU's central core, ever since he was left speechless by Russian foreign minister Sergei Lavrov at a press conference in Moscow. Borrell sought to demand the release of jailed Russian opposition politician Navalni, but Lavrov countered by mentioning the existence in Spain of the Catalan political prisoners and exiles, and the EU representative had nothing to say. 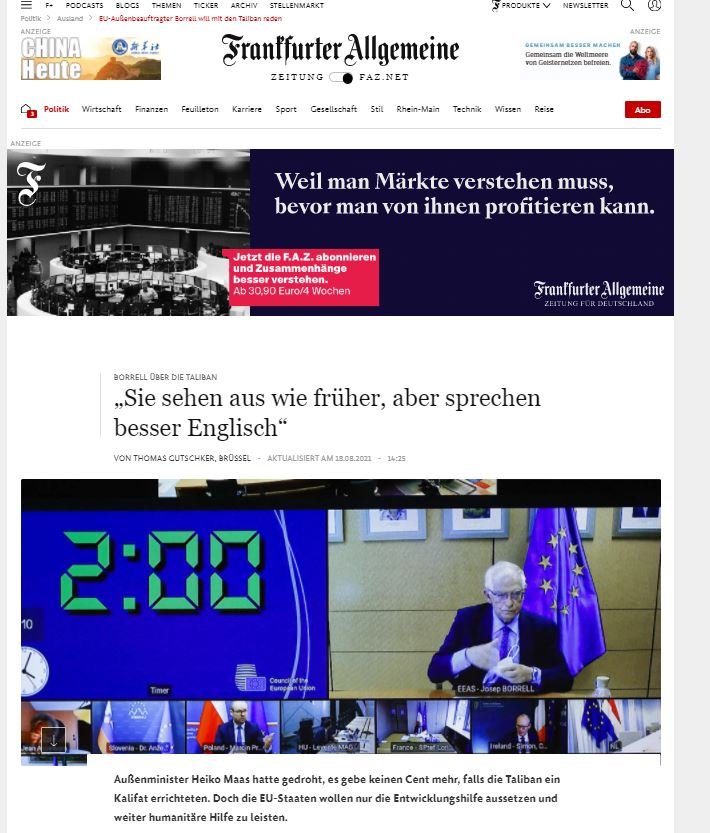 "They look the same but speak better English," the headline of Frankfurter's report on Borrell

A second element of tension with Afghanistan is that German foreign minister Heiko Maas does not want to inject more money into the West Asian country if the Taliban establish a caliphate. On the other hand, Borrell, in accordance with the position of the Spanish government, wants to establish dialogue.

The German newspaper puts it like this: "'The Taliban have won the war, so we will have to talk to them.' That's how Borrell stated the position on Tuesday night, after EU foreign ministers had discussed the new situation in Afghanistan by video conference for two hours. The Spaniard added that this does not mean a formal recognition of the Islamists. But that, nevertheless, it is necessary to talk to them to insist that the rights of girls and women are respected", he details.

Frankfurter recalls that the EU is the largest donor to Afghanistan and has promised funding for the coming years, which the new Taliban government will indeed need. It also warns that "Europe is especially vulnerable in the new scenario, if the coming to power of the Islamists causes a great exodus to the West." For this year, the EU Commission has budgeted $57 million euros in short-term aid, while the bulk of funding "is earmarked for medium- and long-term cooperation" - a total of €12 billion euros by 2025.

"Defeat for the west"

In an interview with Spanish broadcaster RNE, Borrell said today: "What has happened in Afghanistan is a defeat for the Western world and we must face this squarely and have the courage to acknowledge it."

Like many others before him, Borrell compared the images seen in Kabul in recent days with the flight of the Americans from Saigon in 1975. In the Vietnam conflict, the Americans also lost a war that had been prolonged for years and in which the different sides represented two conflicting political and social systems. These memories of another US defeat have led Borrell to say that "we need to think about how we act and how we defend our values” in the world.

The head of European diplomacy spoke as if Western values were a homogenous, monolithic unit that is now teetering because of Afghanistan. Borrell considered that "what we are seeing is the most serious and most important geopolitical event since Russia annexed Crimea" in 2014 and added that it "will certainly have consequences for the balance of power in the world."