The Spanish Supreme Court sentenced former Catalan interior minister Joaquim Forn to ten and a half years in prison for sedition, based on the orders he allegedly gave to the Mossos d'Esquadra police so that they would not stop the 1st October 2017 independence referendum. Apart from being a member of the Carles Puigdemont government that went ahead with the referendum despite judicial orders, the prosecutors' accusation against Forn was toughened because of his role as the minister who gave orders to the Catalan police force.

Now that the National Audience court has handed down a 'not guilty' verdict in the case of Mossos police chief Josep Lluís Trapero and three other key police leadership figures, one of the main foundations for the case against Joaquim Forn has collapsed: his alleged manipulation of the police force to enable the realization of the referendum and, after that, of Catalan independence.

Despite the resounding contradiction between the two arguments, Quim Forn's ruling, issued by the higher Supreme Court, is final. And right now there is only one possible way forward for him: to take the decision to acquit Trapero and his colleagues to the European Union's Court of Human Rights.

While the Trapero decision endorses the police model that the Mossos applied to ensure proportionality while also attempting to stop the referendum, the Supreme Court’s conviction against Forn uses the same argument but against him: “In the case of the defendant Mr Forn, he is objectively accused of failing to exercise the duties legally imposed on him, and of ensuring that the organization subject to his authority - the Mossos d'Esquadra  police - not only disregarded its duty of compliance with those orders and of the effective application of the valid laws, but contributing, at least by omission, to the loss of validity of those laws".

In fact, the Supreme Court recalled that there was a change of interior ministers in the Catalan executive - in July 2017, Jordi Jané left and Forn entered - to ensure, it argued, that the government had full control of the Mossos: "To ensure that the Catalan police - dependent on and functionally linked to the Catalan ministry of the interior - would not, by complying with the valid constitutional law, frustrate the holding of the referendum planned by the defendants, Jordi Jané was replaced in mid-July 2017 by the accused Joaquím Forn, due to his unreserved support for the holding of the referendum. A few days later, in the face of this course of events, the then-director general of police of Catalan interior ministry, Albert Batlle, resigned".

The Supreme Court even accuses Forn of accepting Trapero's criteria when the Mossos' referendum operation was organized - criteria that have now earned the police chief an acquittal, have left the Supreme Court's prosecutors with no argument, and thus leave Forn's conviction without supports: "The defendant Mr Forn accepted the criteria set out by the head of the Mossos setting as a priority objective of the police action the preservation of "social harmony", in reference to an expression present in the obligatory court order, without [admitting] the deliberate self-interest contained in that expression. [Forn] thus concealed - albeit in an unlikely way - his true purpose, of ensuring that the Mossos' action did not constitute a risk to the criminal purpose of the accused. He made it seem that the principle of proportionality made it necessary to avoid the use of force to comply with the judicial decision, unless it was absolutely essential to defend themselves against previous aggressions “by citizens against the police.” After endorsing this strategy, Forn also stated that the other state security forces should only "act when requested" by the [Mossos]. And he protested strongly at the appointment of the person designated as coordinator of the police operation in accordance with the order of the Catalonia High Court and, earlier, at the resolution signed by the senior prosecutor of that court". 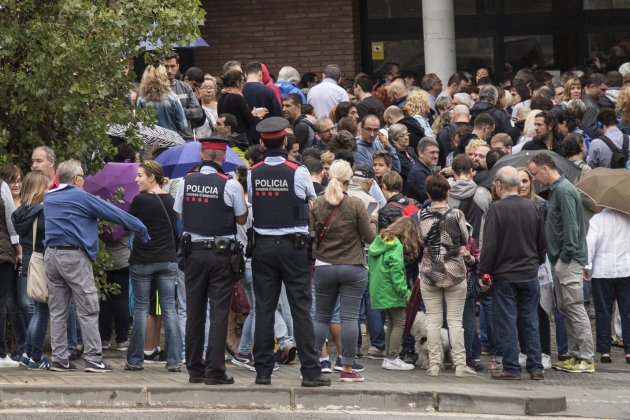 For the Supreme Court, the so-called "Open Schools" day - the day before the 2017 referendum - was practically proof of Joaquim Forn's guilt. On that day, local communities and parents' associations organised extra-curricular and community activities in many schools that were to be used as polling stations. The court argues that Forn allowed the polling stations to be occupied in order to ensure the referendum could go ahead.

The Supreme Court ruling reads: "This unfair action by the accused Mr. Forn meant that schools were not blocked off by police to members of the public who were convoked to mobilize to make possible the voting day. This attitude showed the firm decision of the interior ministry under the direction of the accused Mr. Forn, not only not to prevent the vote, but also, to [ensure that] the police criteria being applied there would allow it to effectively take place, given the clear predictability that the members of the public called to the schools would prevent both the centres' closure and peaceful entry to them."

By contrast, under the ruling in Trapero's case in the National Audience, these same police criteria were correct, enabling the proportionality requested by the Catalan High Court's order: "The Open Schools initiative was representative of this strategy which did not hide its purpose: to prevent compliance with the court orders. But what was the right decision to deal with such a situation? Violently evacuating the premises? Do you want to send the law enforcement units which are available to evict elderly people, parents and children from inside the schools?"

The Supreme Court ruling asserts that the Mossos d'Esquadra were responsible for the failure to close schools and confiscate referendum materials. It makes them responsible for allowing the referendum to go ahead, under Forn's orders: "The Mossos - which depended administratively and not only politically on the accused Mr Forn - did not interfere in the voting activity, beyond a few apparent actions and in a minimal number of centres. In some cases, they even collected, took charge of and transferred election material, which was handed to them by the citizens who carried out the management of the corresponding polling stations. In most cases, in the face of strong opposition from the numerous tightly-packed groups of people who protected the centres and who flatly refused to abide by the court order which the appointed pairs of Mossos police read to them, they followed the instructions they had been given and abandoned their goal in the face of the obvious impossibility of overcoming the resistance of these groups of people." 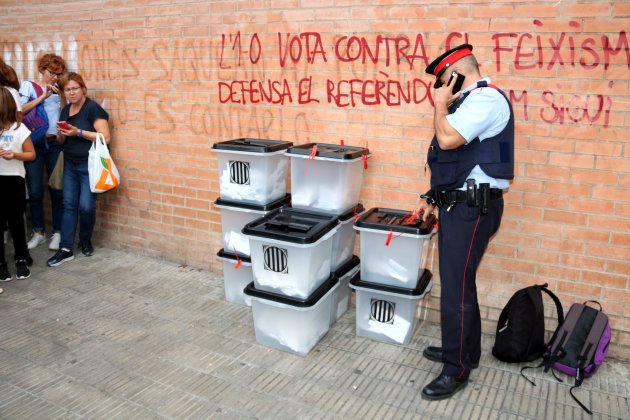 The ruling in the National Audience describes some of the details related to the Mossos as anecdotes, specific cases, in contrast with a generally effective operation to guarantee public safety: "Prudence in the face of such an extraordinary situation, although it made it possible to hold the illegal referendum and favour the pro-independence strategy, cannot be considered as cooperation in sedition or as a disobedience of judicial orders.The use of force against defenceless citizens, against the elderly, against whole families, could not be, in that situation, a valid way to impose obedience to the legal system, even if it were legitimate."