Foreign Policy: The Catalan crisis is "just getting started"

The prestigious US political review Foreign Policy says that the crisis over Catalonia's independence process and Spanish attempts to block it "is just getting started".

In a powerful analysis of the situation - past, present and likely future - Foreign Policy has criticism for both Spanish and Catalan protagonists. The journal says that the Catalan government made its "worst mistake" in attempting to become independent from Spain last October, but nevertheless a strong "resistance" movement has appeared, symbolised by the yellow ribbons on display all over the country. In the magazine's opinion, this resistance is what explains the pro-independence victory in the recent Catalan elections, which constituted a "failure" for the Spanish PM, Mariano Rajoy.

"Rajoy had hoped that a defeat of pro-independence parties in an election sanctioned by Spain’s central government would solve the Catalan conflict; he was wrong", says the Foreign Policy article. "These results were a slap in the face to Rajoy. To add insult to injury, his People’s Party nearly disappeared in Catalonia, winning only four seats out of 135. His rivals on the Spanish right, the Ciudadanos party, won 36 seats — a result that would have been unthinkable a few years ago," it adds.

The magazine notes that the Spanish press has attacked Rajoy since the defeat for having called the snap election, but it points out that the Spanish PM had "no other option" after implementing direct rule of Catalonia under article 155. According to the magazine, a long suspension of Catalonia's self-government could have led to "civil strife".

According to Foreign Policy, Rajoy's real "blunder" was well before, when he failed to tackle Catalan grievances, from the "unfair fiscal policies" to the lack of recognition of a Catalan identity. "For a long time, Rajoy seemed to buy the so-called souffle theory, which held that the independence movement would grow but eventually deflate and therefore there was no need to make concessions", it states. The prestigous magazine points to Rajoy's judicial approach to Catalonia as a dangerous error: "by outsourcing resolution of the Catalan conflict to the judiciary, he now risks losing control of events."

The magazine also criticises the independence movement for having declared independence, after "a referendum with only a 43% turnout", saying that the argument that police repression prevented more people from voting "does not legitimize such a foolish move".

Foreign Policy considers that in the current situation, the most likely prognosis is not for dialogue, but rather "entrenched conflict". "Neither side seems able to “win,” and Madrid is rejecting any European Union mediation", the journal declares. It recalls that the United Kingdom and Canada resolved their similar issues with a referendum, and that in both cases the unionist side won and "tensions eventually receded". Citing the possibility that Catalan support for independence will grow further over time, as well as the context of other problems which the Spanish state has to face, Foreign Policy concludes that "the independence of Catalonia cannot be ruled out in the long run if the Spanish government continues to rely on painkillers rather than proposing a genuine remedy". 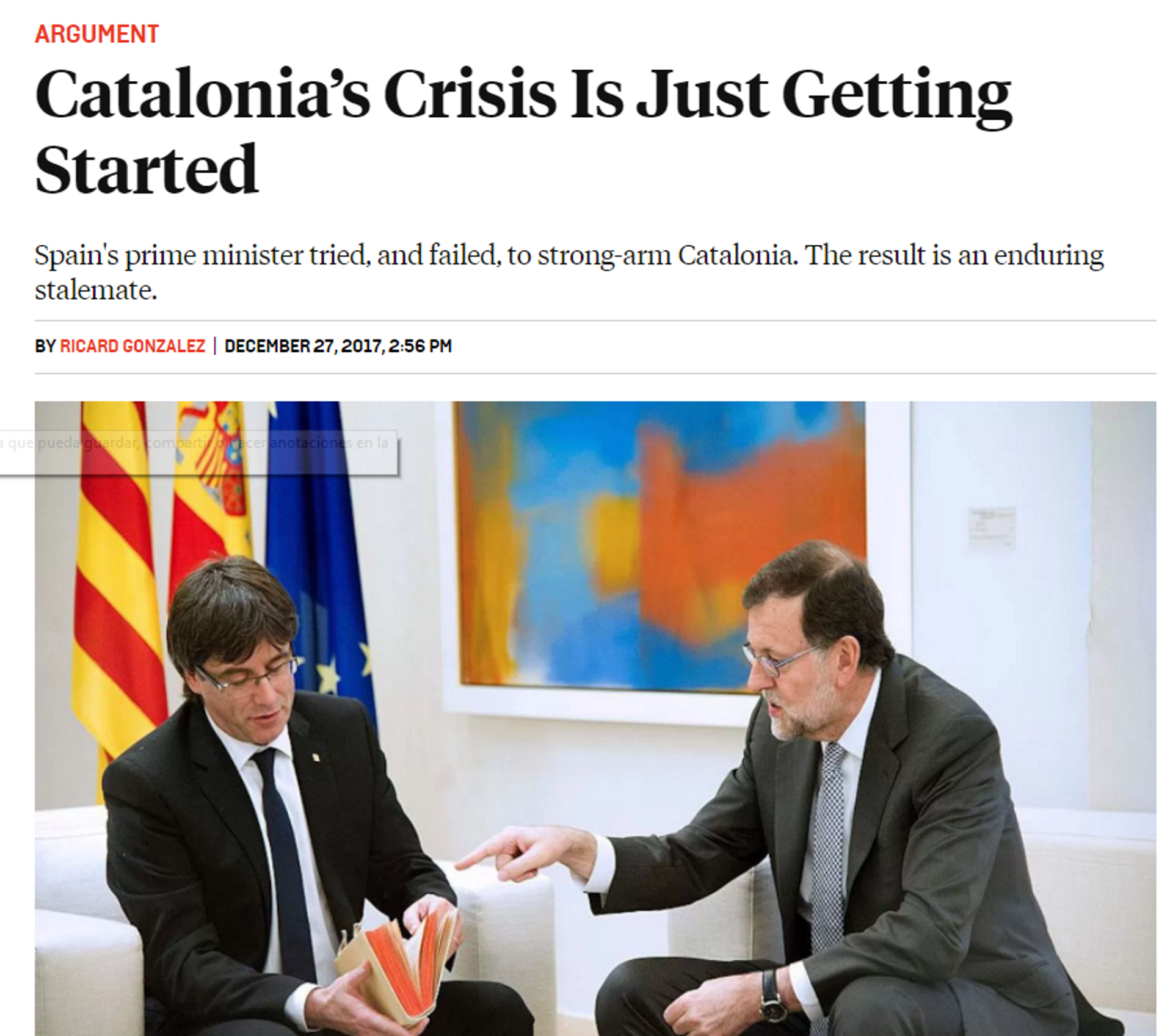