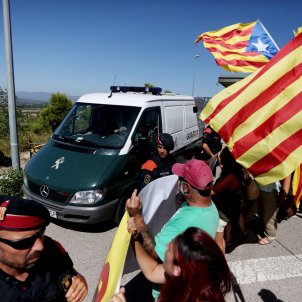 The two female Catalan pro-independence leaders who until now have been imprisoned in Madrid, Carme Forcadell and Dolors Bassa, are back in Catalonia. Forcadell, ex-speaker of the Catalan parliament, and Bassa, former minister of labour, social welfare, and families, arrived at the prison of Puig de les Basses, near the northern Catalan town of Figueres, around 4.15pm on Wednesday. They had left the Madrid prison of Alcalá Meco early on Wednesday morning, and come directly to Catalonia, with only a short stop at a prison in Zaragoza to drop off another prisoner. Unlike the four male political prisoners who also arrived at a Catalan penitentiary today- Oriol Junqueras, Raül Romeva, Jordi Sànchez and Jordi Cuixart - they didn't spend the night in Zaragoza.

The current speaker of the Catalan Parliament, Roger Torrent, is due to visit Forcadell and Bassa on Wednesday afternoon.

The two women were transferred in a Guardia Civil van for the entire journey between the prisons of Alcalá Meco and Puig de les Basses. Unlike the male prisoners who were taken to Lledoners, in central Catalonia, the Catalan Mossos police played no part in the operation. The two women were received by workers of the prison who, on a personal basis, also wanted to welcome them.

Forcadell and Bassa will enter the only women's module in the prison. Puig de les Basses is a relatively new prison centre, having opened in 2014, and it covers a total area of about 61,000 square metres. It consists of 17 buildings, including an infirmary, a sports area and a services zone where productive workshops are based. It has capacity for 922 inmates and at present there are 734, and 35 of these are women.

The remand prisoners' routine which the two politicians will follow is the same as that of inmates who have been sentenced. "The only difference is that they do not take part in specialized activities related to their specific offence, as they have not been found guilty of anything", said a prison administration source.

According to justice system sources, the political prisoners will see their families for the same number of hours as up till now. This means that for normal visits, through glass with a telephone, the prisoners will be limited to 40 minutes per week, which can be split across the two days of the weekend, twenty minutes per day, or all together on either Saturday or Sunday.

As Carme Forcadell and Dolors Bassa arrived at the Figueres prison, they passed by a multitude of yellow ribbons. Since their Catalan prison destination has been known, local members of the Committee for Defence of the Republic group have filled the access road to the Puig de les Basses centre with the insignia calling for the political prisoners' freedom - the yellow bow. Bows were also painted on the asphalt.

On Wednesday at 7pm, outside the penitentiary, a welcoming concentration has been called by the pro-independence civil groups ANC and Cultural Òmnium, along with the Catalan Association of Civil Rights, which the families of the prisoners belong to. Those expected to be present included Montserrat Bassa, sister of Dolors Bassa; the vice president of the ANC, Josep Cruanyes, and Òmnium representative, Clàudia Pujol. 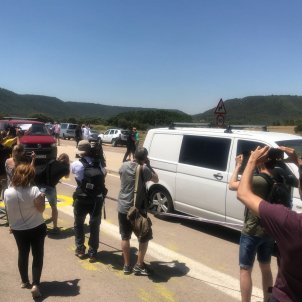 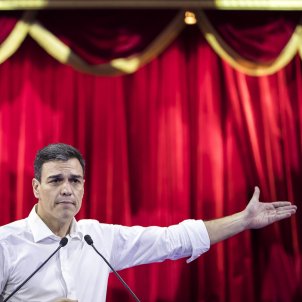