Feminism takes to the streets of Catalonia despite the pandemic

As on every March 8th, thousands of women took to the streets of Catalonia despite restrictions due to the Covid pandemic. The largest gathering was in Barcelona, which brought together protesters in the city's Passeig de Gràcia. Although turnout was way below other years due to the restrictions, the 4,500 places available for the pre-registration rally were all taken up, and the protest maintained the same atmosphere of other years: staunchly reclaiming women's rights, but with a festive mood.

The anti-Covid measures forced the organizers to replace the traditional demonstration with an event in which it was mandatory to register to participate and gather in one of the eight sections into which the Passeig de Gràcia had been divided, from Avinguda Diagonal to Gran Via de les Corts Catalanes. 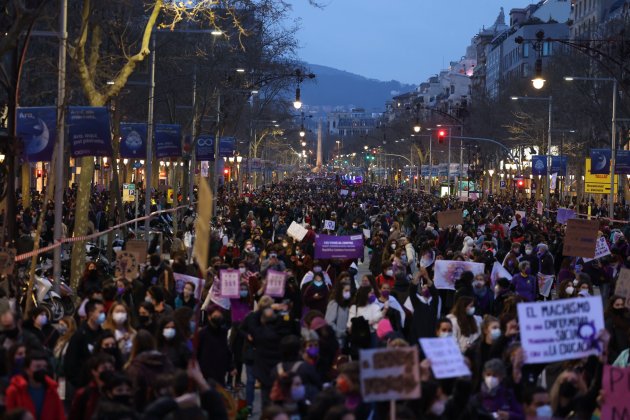 During the rally, a multitude of protest banners were seen, such as: "Against sexist violence, feminist justice" or "Enough aggression against women", "The struggle is for everyone" or "We are not so few, nor are we so alone." Those attending the rally respected safety distances and wore masks. The rally included theatrical performances, the reading of a manifesto, protest chants, and a few minutes with a sea of ​​lilac torchlights. In the end, music broadcast from one of the floats turned Passeig de Gràcia into an improvised dance floor for a quarter of an hour.

Although in Madrid, the delegation of the Spanish government refused to authorize a single rally to mark International Women's Day, with the pandemic as the justification, mobilizations went ahead in other parts of the Spanish state. In Catalonia, as well as the Barcelona rally, about 2,500 feminists gathered in Girona, under the slogan "They want us confined, they'll find us organized".
One of the issues raised in speeches at the Girona march was the cases of sexual harassment recently revealed at Barcelona's Institut del Teatre.

At one point during the route, the march encountered a heavy deployment by the Mossos police, preventing them getting close to the law courts. Those attending criticized the police force for "fearing" a rally of women - throughout the march, women led the mobilization, and men were asked to remain out of the front line.

In Lleida, about a thousand women took part in two separate mobilizations; in Tarragona, around 500 gathered, and feminist demonstrators also filled the streets of Vic.