Day of the Constitution

Far-right Vox, the star of Constitution Day march in Barcelona as others stay home

Several hundred people marched through the centre of Barcelona this Friday, Spain's Day of the Constitution, to vindicate the Spanish state's supreme governing document. Their route took them from Plaça Urquinaona down Via Laietana, the epicentre of the protests against the Spanish Supreme Court's verdicts on the pro-independence leaders in October.

But undoubtedly the star of the march, organized by the pro-Spanish union platform España y Catalanes, was the leader of the far-right Vox party, Santiago Abascal, who skipped the official reception in Madrid's Congress to come to Barcelona, ​​the place where he claimed "the unity of the nation is most threatened". The extremist leader was received by Spanish nationalist marchers with chants of "President, president".

Meanwhile, the Ciudadanos party, which had confirmed its participation in the event, cancelled it at the last minute, justifying the change of plans as being due to the presence of a banner demanding the repeal of Spain's law of gender violence. "At Cs we believe that today is a day of celebration and commemoration of the values ​​of the Spanish constitution, and there is no space for proclamations that question the fight against one of the worst scourges of our society," said the party in a statement. The party also called off a press conference that planned by leader of the party in Catalonia, Lorena Roldán.

At the head of the march down Via Laietana, then, there were only representatives of the Partido Popular in Catalonia and Vox, lined up behind a banner which read "For a constitutionalist government." 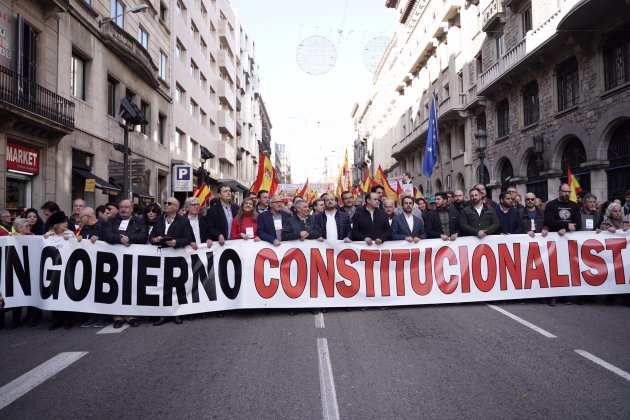 Along the route, chants such as "Put Puigdemont in prison" or "Torra, traitor, Spain is your nation" were heard from the protesters. Civil Guard flags were flown and, as had been reported by Ciudadanos, banners calling for the repeal of the Gender Violence Law were also carried by marchers.

The demonstration ended with speeches in front of the Spanish National Police station at Via Laietana, where the Spanish national anthem was also played.

In statements to the media, Abascal justified his absence from the ceremony at the Congress in Madrid on the grounds that he could not "share space with those willing to form a governmental pact with the coup-leaders." He accused Pedro Sánchez's PSOE of being "unscrupulous" in what it was prepared to do to form a new Spanish executive and said that he felt "more comfortable" in Barcelona "with the people who are having a difficult time, who are afraid."

The president of the PP in Catalonia, Alejandro Fernandez, warned that any negotiations by the PSOE that went beyond the Spanish Constitution implied giving in to "imposition and blackmail." Fernandez said that the talks between the PSOE and pro-independence party ERC "are being established outside the constitution" because "self-determination is being talked about." "Dialogue is always positive within the Constitution and the law, and it stops being dialogue and turns into imposition and blackmail when it takes place outside the Constitution," he said.