Four economic players on EU funds: a well-made plan that Catalonia can rely on

The European Union's NextGenerationEU fund will reach Catalonia: economic actors can rely on the investment arriving and that it will end up being fully executed. That's what four experts collectively affirmed today in Elnacional.cat's round table discussion on the European post-Covid recovery funding. The four - Matilde Villaroya, Catalan government secretary for economic affairs and European funds; Marta Angerri, European financing director of the Ametller Origin food sector group; Pep Martorell, associate director of Barcelona Supercomputing Center; and Ernest Pérez-Mas, executive director of telecoms operator Parlem - addressed the subject of "Who can benefit from the European funds, and how?", organized by Elnacional.cat at the Palau Robert and moderated by journalist Xavi Freixes. During the event, they all commented on the situation of the major European project for the post-Covid decade, and all four agreed that what must be achieved with the 140,000 million that the Spanish state will receive in the years until 2027 is a change in the economic paradigm. They warned that one of the great concerns has been that this great volume of funding is invested correctly and not just spent - that is to say that the money goes to projects that produce future benefits for the country. Despite this reservation, all four are optimistic, viewing the European Commission's plan as well put-together and with guarantees so that the desired effects are achieved, even if the execution is proving especially slow.

The first to speak in this morning's discussion was Matilde Villarroya, who, despite these positive aspects, voiced the Catalan government's regret that it has little margin for manoeuvre in how it decides to allocate the European funds that arrive in Catalonia, since the calls for funding proposals are managed from the Spanish central authorities, and the characteristics of funding calls opened up might not be the most suitable for Catalonia at a specific time. In relation to that, the economic affairs secretary asserted that the Catalan government has been demanding access to the funds for many months in order to be able to invest in key projects in Catalonia and open their own calls for proposals, but she regretted that the state's refusal in this sense is total. One of the criticisms all the administrations are receiving is the slowness of deciding the allocation of the financing and in this regard, Villarroya recalled that "from the moment the funds are assigned until the agreements are completed may take many months". As a consequence, both the calls for proposals and the grants themselves are taking much longer than entrepreneurs and investors would want. Another delaying factor she indicated is the level of supervision to which all the Next Generation subsidies are subject. 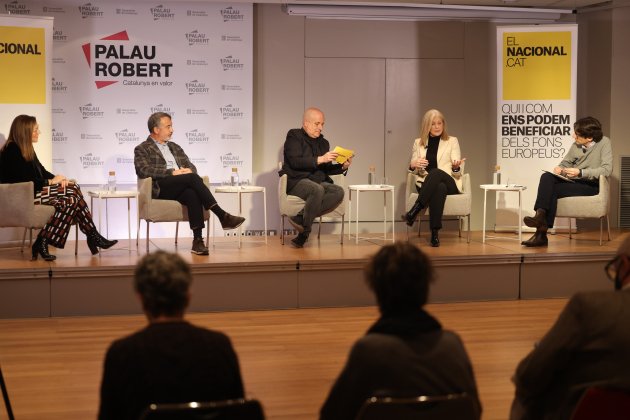 From a government representative to the different types of firms that hope to be able to put the funds to work. Executive director of Parlem, Ernest Pérez-Mas, regretted that his company has not yet received any subsidy or assistance from European funds and he criticised the Spanish industry ministry for centralizing the resources it is receiving from Europe, much more than previous governments. A thesis that he exemplified by the fact that Spain has the greatest length of optical fibre cable per inhabitant in Europe, and the second highest in the world. "In the same way, 80% of the European funds will go to Movistar," he reported, referring to Spain's largest telecom operator. "The administration is very centralized and, therefore, money goes to large companies," he reproached. In addition, he brought up the fact that the funding specifically destined to SMEs - about 4 billion euros - is destined for digitization. On the positive side, Pérez-Mas recalled that the plan has been designed in Brussels and not in Madrid and this makes it more reliable.

For her part, Marta Angerri affirmed that the European funding will mark a turning point in the Catalan economy, giving the example of the Agroparc project which Ametller is creating in the Penedès county which will have both industrial and agricultural sections. It is a plant that will change the production model towards more sustainable, circular agriculture. "The EU funds represent the capacity for transformation towards a newer and more productive paradigm for companies. We look forward to them", she said. Regarding the role of the administrations, Angerri regretted that they are set up for managing and not for spending, which also explains this slowness, although she was optimistic considering that "this has just begun" and that the process will pick up pace as months and years go by. At the same time, she also recalled that all investments must produce an economic return and that the return is in employment as well, that being what the funds have been created for. And she added that every project, if it involves a large company, must have more companies behind it.

Finally, Pep Martorell regretted in the first instance the lack of "administrative courage" in terms of the distribution of the funds and with regard to decision making. In this sense, he acknowledged that the funding constitutes "an amount of money that has never been seen, and a well-created strategy, aligned with the European Commission." At the same time, he added that if the problem is that "it comes later than expected, that is not important", since there is a whole decade to execute this fund. In fact, what he showed concern about is the matter of the money being invested well and not just spent. That is why he asserted that on certain occasions the administrations need to skip the public calling for proposals in order to allocate funds to key projects for the future, so that these investments also involve a greater number of private investments in that sector.