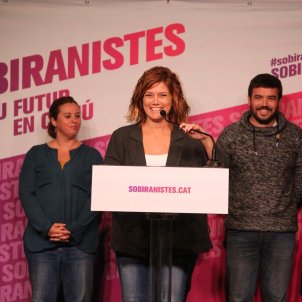 Disagreement in the left-wing Catalunya en Comú group on the Catalan sovereignty issue: the party's approval this Saturday of a new road map for a future plurinational Spanish state has been met with severe criticism from the wing of the party which is most clearly in favour of Catalonia's right to decide its own political future.

The Sobiranistes (Sovereignists) sub-group within the Commons said in a statement that it regretted the change of ideology which in its view the party had just adopted, "moving the party away from the centrality of the country [Catalonia]." In addition, says the group, the changes "wipe out the founding values of the Commons".

The Commons group, which has always been non-aligned on the question of Catalan independence but has favoured Catalonia's right to decide its own political future in a referendum, held a national council meeting under leader Joan Mena on Saturday which voted in favour of a new roadmap that includes a Catalan constitution in a Spanish plurinational framework, as a way to supercede the current statutory framework. That is, a Catalan constitution, but within Spain.

This, for the Sovereignist critics, means "the disappearance of any reference to the construction of a Catalan republic or to a constituent process with the exercise of the right to self-determination at its centre." The platform led by Elisenda Alamany and Joan Josep Nuet said that these changes "break with the founding values of the party", which did not previously subordinate the will of Catalan citizens to the Spanish state.

The Sovereignists complain that in the last few months the Commons have begun to show a "certain discomfort" in reference to the independence referendum on October 1st, 2017. And they give specific examples of this: the opposition "to positions opposing the repression [of Catalonia] or critical of the Spanish constitution of 1978" and "resistance from a sector of the leadership toward attending demonstrations that demand the freedom of the Catalan prisoners." This change in course, they say, does not respond to the current situation in Catalonia and moves it away from being "a winning project of the left".

The Sovereignists note that Catalunya en Comú was founded as a new political group in Catalonia, "convinced that the country needed a new left and a new sovereignist approach." The political principles, backed by former leader Xavier Domènech on April 8th, 2017, stated that Catalonia was then part of the Autonomous Communities [regional] framework of a [Spanish] regime that "was failing and preventing the sovereignty of Catalonia".

The party's constitution opted for the creation in Catalonia of a socially, democratically and environmentally just republic, "as the maximum expression and achievement of its national sovereignty."

Today, a year and a half later, the critical sector regrets that the new party leadership has approved a new road map "in a hurry and without the participation of the party's territorial groups".

Alamany: "It was intended to stand for a different way of doing politics"

Following the Commons national council meeting, Elisenda Alamany shared a reflection on social media. "The new Commons project was meant to stand for a different way of doing politics. For some, like me, this was non-negotiable," her text begins.

The reason for this, explains Alamany, was that for years she had personally experienced the consequences of "politics remote from the people, both in its form and its content. Constructing a new type of politics was not a whim".

Alamany reiterates her disagreement with the new roadmap, which she says moves away from "the principles that were based on more than 40 workshops all over the country, more than 3,000 submissions, the collaboration of more than 300 experts on different subjects and the vote in favour of 5,000 people."

"I am sad for all the efforts and sacrifices made by many people to get this far", concludes her statement.

"People above the party hierarchy"

For the Sovereignist wing of the party, the main value of the party at its foundation was that "the people were the protagonists, not the party leaders," an approach that "has been lost with the new direction," they say.

The national council of the Commons endorsed the new strategy document that defines the roadmap with 56% of votes in favour. 19.5% voted against and 24% abstained. The document proposes a Catalan constitution in a plurinational Spanish framework as a way to supercede the current framework of the Spanish state.

"With the departure of the party's general coordinator [Xavier Domènech], and with many of the visible faces no longer there, the new direction is about to change the party's principles with only 63 votes in favour," says the letter. The Sovereignists offer a gloomy outlook: "The situation is more worrying now than when the Sovereignists platform was born." "The transparency and freshness that were born have been eliminated today with a meeting and 63 votes in favour," they conclude. 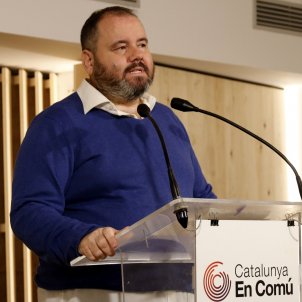 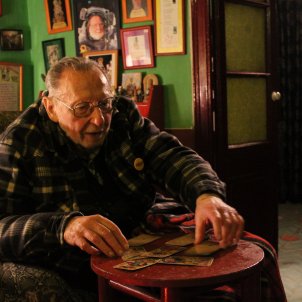 City life While tourists stroll past, a retired Barcelona illustrator struggles to get by Anton Rosa