After leaders' summit, Catalan president tells Reuters: "We will be independent"

Catalan president Quim Torra has stated in an interview with the news agency Reuters, the day after his summit meeting with Spanish prime minister Pedro Sánchez, that Catalonia's journey towards independence from Spain was unstoppable. "We will be independent," was the headline that Reuters put on the story, which was reported by The New York Times, among other media.

In the interview, conducted this Friday morning, Torra said that he wants to reach agreement with the Spanish government on a date to hold an independence referendum, in the framework of the dialogue table which the Spanish executive has agreed to. The path to independence is already "irreversible", he said. 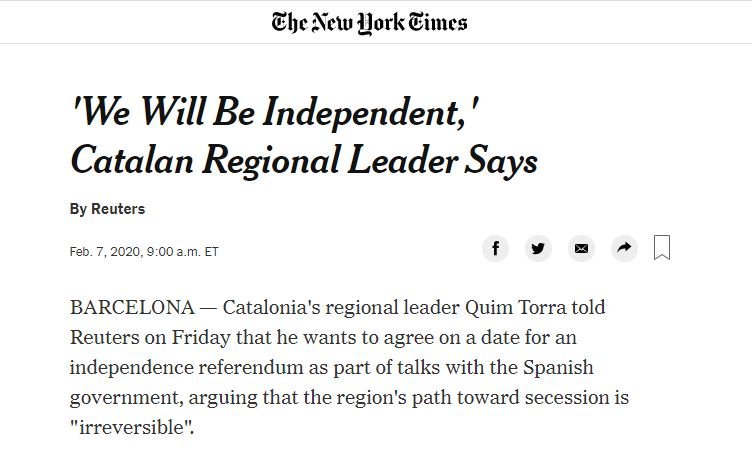 Reuters states that Torra set no target date for holding the referendum, but was convinced that there was no going back.

The agency recalled that Sánchez "refuses to take any step toward independence" but has agreed to open talks with the Catalan government, with a first meeting to take place later this month.

Torra-Sánchez meeting Pedro Sánchez on dialogue with Catalonia: "We're not afraid to talk about anything" Marta Lasalas