The Council for the Republic, the organization in exile set up to advocate for Catalan independence, has been launched in Brussels at a presentation ceremony headed by Catalan president Quim Torra and exiled president Carles Puigdemont. This Saturday's launch event was held at the Belgian capital's Royal Flemish Theatre (KVS) and in fact, due to public demand, a second session was also held.

The presentation began in darkness with the reading of a famous Catalan quote: "No admetis, doncs, consols ni plors, aixeca el cap" - Don't, then, accept consolation or tears, lift up your head. The words, originally spoken by exiled 1930s Catalan president Lluís Companys, were read by actress Sílvia Bel, on a stage featuring the name of the Council of the Republic and two flags: Catalonia's official flag, the senyera, and the blue flag of the EU.

In the front rows of the KVS, the Catalan government was well represented, headed by vice-president Pere Aragonès, along with representatives of the two largest pro-independence parliamentary groups, JxCat and ERC. The third group, the CUP, had announced that it would not take part in the act as it does not accept symbolic gestures. Among those who were present, though, were key figures in the pro-independence civil society group: the vice president of Òmnium, Marcel Mauri, and the president of the ANC, Elisenda Paluzie, as well as leaders of two other pro-independence parties: PDeCAT and Demòcrates. 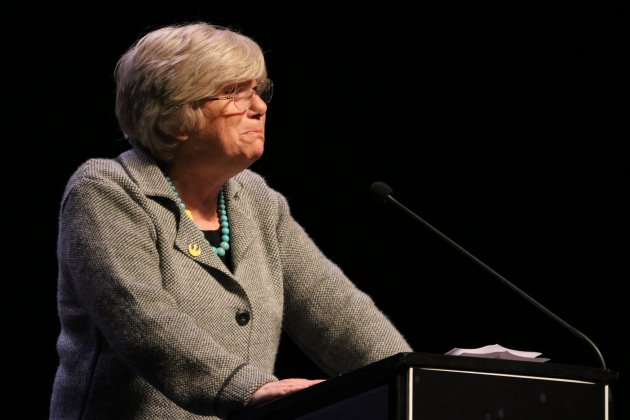 The first to speak was exiled education minister Clara Ponsatí, who argued that the need to set up the Council for the Republic shows that the struggle for independence has not reached its goal, but at the same time, that the Spanish state has not managed to defeat the movement. "Their coup d'état and authoritarian drift have not been able, and won't be able, to defeat it," she said, classifying the Council for the Republic as a decisive tool. For this reason, warned the exiled minister - in words that were also echoed in the speeches that followed - she warned that the strength of the Council will depend on the support it receives: "We will have as much strength as people give to us," she added.

Ponsatí was unable to contain her emotions as she mentioned "companions who are facing reprisals, especially the political prisoners". "Every minute of your hunger strike strikes us like a blow," she said, and then went on to vow to persist with the legal struggle in international courts. "Nothing will be simply given to us, because freedom only bursts forth and grows through courage. It has been a very difficult year," she concluded.

Next, a letter from Carme Forcadell was read. "Outside, there is a lot of work to do," was the message from the jailed former speaker of the Catalan parliament, agreeing that much of the work of internationalization of the fight must aim to expose Spain's repression before the European institutions - and then to ask them if this is the Europe they want. 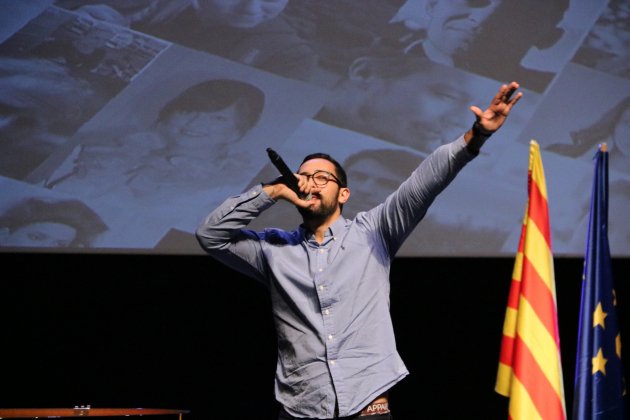 Catalan singer-singwriter and independence activist Lluís Llach then took the stage to present another cultural figure, the exiled Mallorcan rapper Valtònyc. "In my time," said Llach, "we were fined or banned, today the so-called Spanish democracy imprisons them". Valtònyc's performance was followed by a projection of the famous speech made by Catalan cellist Pau Casals to the United Nations in 1971. Llach also performed his song Venim del nord, venim del sud.

Exiled health minister Toni Comín explained the five areas of action of the Council and culture minister Lluís Puig spoke of the mechanisms of public participation in the Council. Puig also described how the Council will work, before the ceremony ended with the speeches by presidents Quim Torra and Carles Puigdemont.

"Catalans have lost their fear. They don't scare us," Quim Torra told the audience in the Brussels theatre. "And I have to tell you that there's no going back in the path to independence."

For his part, Puigdemont described the Council as "the seed of the third victory of the independence movement" - after the referendum of 1st October and the overcoming of the state repression under article 155. And he called, once again, for unity.

In the face of what he called the "shadowy and threatening" discourse of the Spanish state, said Puigdemont, independence still "stubbornly holds itself up in prison and exile" and from the heart of Europe, it launches the Council for the Republic. Puigdemont described the Council as a free space, "free of fear", which will be able to do what the Catalan institutions can't do, against which the Spanish state can't act, because it is a body that only depends on the citizens.

The members of the Council for the Republic

The executive committee of the Council for the Republic will consist of Puigdemont and Torra, along with the Catalan ministers in exile Comín, Ponsatí and Puig; the president of the ANC, Elisenda Paluzie; the leader of Demòcrates, Toni Castellà, lawyer Neus Tobisco-Casalas, and Meritxell Budó.

The presentation began late due to problems suffered by the charter flight from Barcelona carrying Catalan government members and deputies.