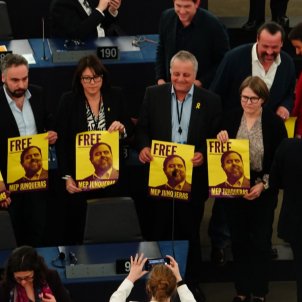 The UN and the EU have been urged to take action against Spain's Supreme Court following a controversial step it has taken which may have breached both the separation of powers and the human rights of people vulnerable to coronavirus. On Tuesday, the court published a strongly-worded message aimed at Catalan prison officials to make them think twice about releasing the jailed Catalan pro-independence leaders on humanitarian grounds during the coronavirus pandemic. Now, both the European Commission and the United Nations have been asked to investigate the judicial action.

European parliamentarian Diana Riba (of the Catalan party ERC) sent a letter to European justice commissioner Didier Reynders, and another to the UN High Commissioner for Human Rights, Michelle Bachelet, urging them to investigate the Supreme Court for "threatening officials, breaching the separation of powers and discriminating against prisoners for political reasons".

As well, the three MEPs for the Catalan pro-independence JxCat party, led by Carles Puigdemont, wrote a letter to the European Commission for the same reason. In this case, the mechanism used was a parliamentary question asking if EU officials considered that the Supreme Court's action constituted "ideological discrimination", a violation of "fundamental rights" and whether the "presumption of innocence" was being threatened.

Translation:
"In a country with a normal justice system, its highest court would not threaten officials through whatsapp messages sent to the press. Judicial Francoism is out of control. We address ourselves to the European Commission." - Clara Ponsatí

On Tuesday, the Spanish Supreme Court published a press release warning Catalan prison officials that temporarily releasing the nine imprisoned Catalan pro-independence politicians, so they could spend the coronavirus lockdown period at home, could constitute a crime.

The court's warning came after prisons began examining whether inmates who had been carrying out work outside the prison as part of their senteces would qualify to be allowed to spend the lockdown in their homes, rather than in the cells. The requisites listed for this humanitarian measure during the coronavirus crisis are that prisoners must have a low risk of repeat offending and must have a home to go to. The main beneficiaries of the measure so far have been prisoners who are serving under open prison regimes, and 69% of such prisoners have been allowed to go home for the confinement period.

However, those who have been given approval for a work-based prison regime (under article 100.2 of the prison regulations) - a category that includes all nine of the pro-independence political prisoners - could also be eligible.

A Catalan government spokesperson expressed surprise at the Spanish court's reaction and regretted that efforts were being made to treat the pro-independence leaders differently from other prisoners to whom the measure might be applied.