The centre-right political sphere of German chancellor Angela Merkel is highly perturbed about the way Spanish prime minister Pedro Sánchez has managed the coronavirus crisis in Spain. Sánchez is no longer seen as the politician in whom they can deposit their hopes for the stability of a Spain afflicted by political division. The Konrad Adenauer Foundation, linked to Merkel's party the Christian Democratic Union (CDU), has just released a report which is devastating for the Spanish Socialist leader (link in German).

According to the foundation, Pedro Sánchez has made visible "errors" in the management of the coronavirus health crisis, to the point where Spain has become the country with the second largest coronavirus death toll after Italy, and the Spanish PM is trying to hide his mis-steps internationally by attacking Germany and the Netherlands for not wanting to pay for the coronavirus "Marshall Plan" he advocates. "Sánchez's tone towards the European partners who reject the plan is getting tougher and this is distracting attention from his mistakes," says the report.

The Christian-democrat foundation does not hesitate to mention that Spain is currently experiencing "the most severe restrictions on personal rights and public life in the EU", in the wake of the state of alarm decree issued by the coalition government made up of the Socialists (PSOE) and the left-wing Podemos party.

The report claims that Sanchez has brought the Spanish state to its current point in a desperate attempt to stop the coronavirus, after failing to pay attention to the pandemic in its early days. "On 31st January, the first case of coronavirus infection in Spain was confirmed. The patient was a German who had had contact in Munich with a person from Wuhan, the epicentre of the epidemic in China. In February, the virus slowly spread through Spain, and serious warnings of an imminent wave of infection were already heard at the end of the month; however, the Spanish government dithered about warnings and restrictions on movement, and did not want to cancel the mass demonstrations for International Women's Day on 8th March. It called for participation in the rallies, even though the European Centre for Disease Prevention and Control (ECDC) had raised the risk level from "medium" to "high" on 2nd March, and recommended that large concentrations of people were to be avoided. It was not until 9th March that the Spanish government issued public warnings," says the report. 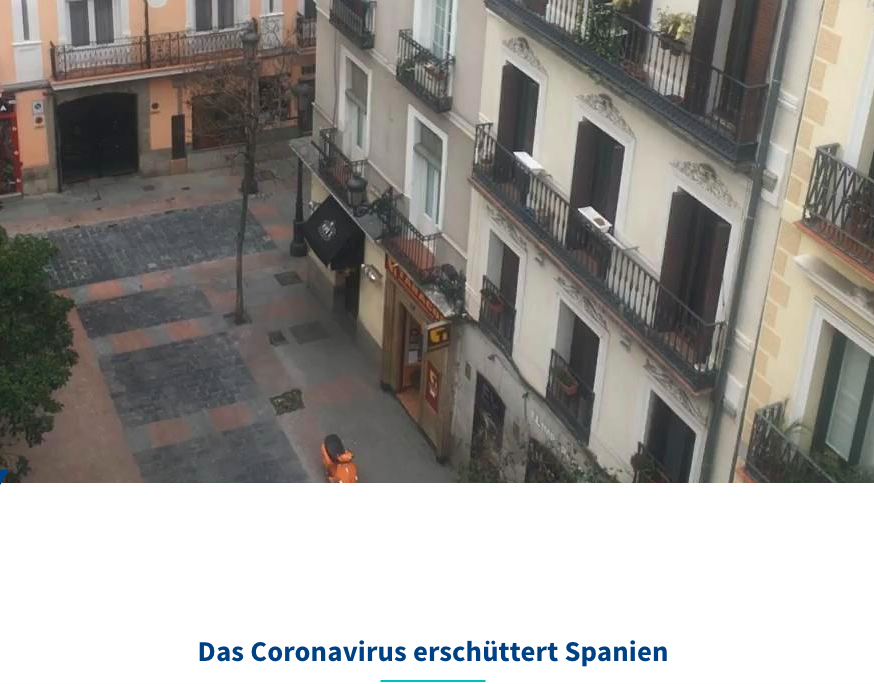 According to the centre-right foundation, thousands of people were infected at the feminist rallies, including "Sánchez's wife Begoña Gómez, deputy prime minister Carmen Calvo and equality minister Irene Montero."

The study attributes the fact that the virus has now overwhelmed the Spanish healthcare system to this initial neglect. "The staff and equipment of hospitals and clinics are completely inadequate for the current demand. Spain has 10 intensive care beds per 100,000 head of population, in comparison with Germany's 29. There is a lack of masks, respirators and protective clothing. Doctors and nurses are highly overworked, and due to the lack of material, many doctors and nurses - about 10,000 - have themselves been infected and have had to stop working," he says.

Also mentioned, as a disgraceful situation, is what has been occurring in senior citizens' residential centres: the Adenaur foundation describes situations of abandonment, with cases of elderly people dying completely alone.

The foundation directly points the finger at health minister Salvador Illa, who it accuses of trying to buy coronavirus tests in China on a large scale, "without paying attention to the terms of Chinese licences." "A list of authorized companies that the Chinese embassy in Spain had provided to the health ministry was not taken into acccount," the report says.