The Catalan government has moved to take tough public health action to try and curb the second wave of Covid-19, and has ruled that all bars and restaurants in Catalonia are to close, except for takeaway food services. The restriction goes into effect on Friday and will remain in force at least until the end of October. The Catalan administration will allocate 40 million euros to help the hospitality sector. Next Tuesday it plans to pass measures for direct aid to restaurants and a special line of financial support.

These measures were announced at a press conference this Tuesday lunchtime, which followed a long meeting with representatives of the restaurant sector. The measures which have been announced will oblige hospitality establishments to close both interior spaces and terraces to customers. It will only be possible to visit the premises to buy takeaway food or products which are not to be consumed at the establishment. The measures are being applied to "avoid total confinement," said acting Catalan vice president Pere Aragonès, who also admitted that the executive is taking "difficult decisions", but they must be implemented in the face of the "extremely high risk" of contagion.

Aragonés: "We have before us a complex moment. It's necessary to act today to avoid a total lockdown in the coming weeks." "Today we've taken difficult decisions, aware of the social and economic consequences that they will bring, but although difficult these decisions are totally essential."

On the closure of bars and restaurants, he said it is a "painful but necessary measure." In addition, the government called for the members of the public to minimize their mobility, limiting relationships and social encounters and promoting distance working "as much as possible". “Being sociable causes more contagion to occur,” Aragonés added to justify the closure of bars and restaurants. 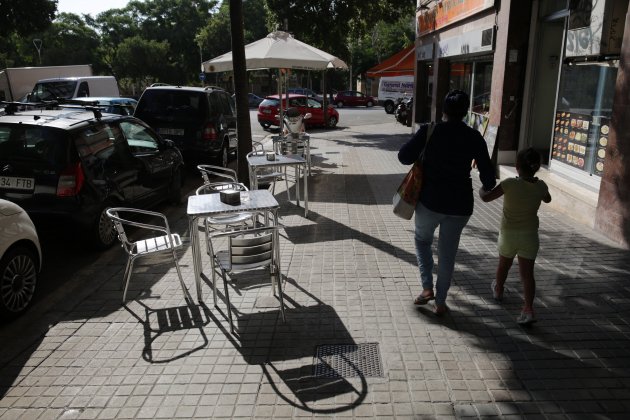 As well as the closure of bars and restaurants, are a series of other measures. The Catalan government has approved a ban on opening for beauty services, except hairdressing; gambling halls; and amusement parks. As well, all non-professional sports competitions have been suspended in Catalonia.

In addition, maximum permissible capacity of spaces are reduced: to 30% of usual maximum in shops, 50% in cultural facilities, 50% in gyms (where a prior must also be made), and 50% at religious events.

In a way, the new measures send Catalonia back to the starting blocks again: it is a return to the restrictions that were in force in June, just as the lifting of lockdown was beginning. However, adds the government, the hospitals still have a certain margin and their services are not saturated: in fact, it is precisely to avoid "putting more stress on health spaces" that these measures are being introduced. The vice-president remarked that the drastic restrictions are being applied "to do as much as possible for people's health and save lives".

Maximum collaboration with the Spanish government

"There are several ways to deal with the crisis. It can be done as a political war or a war of flags. We won't do that. We'll be clear, we'll be honest and we'll tell the truth to the public," said Aragonés during his initial speech, in which he also asserted that the government of the Generalitat of Catalonia will have the maximum collaboration of the Spanish government.

Aragonés: "We don't expect anything other than the support of the state and all the institutions that depend on it. ... We expect all administrations to support these measures which are based strictly on public health and epidemiological criteria."