Colau saves the Barcelona mayoralty, thanks to the PSC and Manuel Valls

Her activism has made her into a global reference point in the street-level struggle for social rights. And this Saturday, Ada Colau has prevented the most important eviction of her life: that of the Barcelona city hall. She has done so, retaining the mayoral office she won four years ago, by assuming the political cost of accepting the votes of former French prime minister Manuel Valls to hold on to the position. 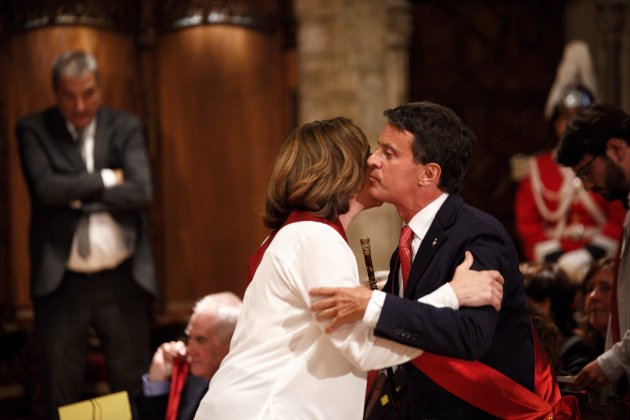 For the first time in a Barcelona municipal election, the most voted candidate, in this case Ernest Maragall, of ERC (Catalan Republican Left), has not become mayor of the Catalan capital. Barcelona en Comú (BComú) leader Colau preferred to avoid the heavy jeering that awaited her had she entered the city hall via its main door, that of Plaça Sant Jaume, where a large protest was underway against the operation mounted to stop the pro-independence ERC leader from taking the mayoralty. Once inside, the incumbent mayor was victorious on the first ballot with an absolute majority, 21 votes, thus maintaining the leadership role she won in 2015. The 10 votes of the 'Commons', the eight of the Catalan Socialists (PSC) and, crucially, the three independent councillors that were part of Manuel Valls's right-of-centre Ciudadanos-backed platform - Valls himself, Celestino Corbacho and Eva Parera - formed a roadblock preventing a pro-independence candidate from moving into the mayor's office.

Ernest Maragall maintained his candidature, but only received 15 votes, the ten from ERC's councillors and five from the other pro-independence party on the council, Together for Catalonia (JxCat). Just as she did four years ago, the re-elected mayor took the oath of her position with the words "by legal imperative and with a commitment to the residents to ensure that Barcelona remains a city of hope, and one that is just and feminist." Once she had the mayoral staff in her hand, the first person she went to greet was Joaquim Forn, political prisoner and new JxCat councillor, who had been roundly applauded at the start of the constituent session and also when he got up to vote. The historic council chamber, the Saló de Cent, let out a chant of llibertat - freedom - and Colau also joined in.

Three days after the election, already more than two weeks ago, Manuel Valls shook up the municipal chessboard by announcing that he would give his votes to Ada Colau, whom he had continually harangued throughout the campaign for her "distastrous" management of the city. His motive: to close the door to the independence movement. But after the vote, the former French prime minister maintained a silence that intensified the intrigue surrounding his 'Operation Colau'. Finally though, Valls did as he said he would, and he and the other two independent councillors on his platform, Celestino Corbacho and Eva Parera, voted in favour of the BComú leader. The other three Ciudadanos councillors ended up leaving their voting papers blank, thus opting for a middle course, after the party leadership of the right-wing Cs had said that it didn't approve of giving support to Colau.