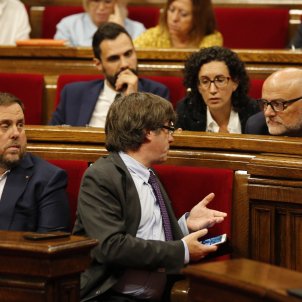 Spain's paramilitary police force, the Civil Guard, continues to take steps to prosecute pro-independence Catalans. After previously pointing the finger at the Catalan Republican Left party (ERC) as the organizer "in the shadows" of the 1st October independence referendum, after accusing firefighters, students and town councilors of intimidation on referendum day, attributing a crime of sedition to 31 officials for having taken part in the large demonstration on 20th September at the doors of Catalan Ministry of Economy while a police search was underway there, and after classifying all of the massive peaceful demonstrations held annually on Catalonia's national day as acts of rebellion, the Civil Guard has now passed a report to Supreme Court judge Pablo Llarena naming more than 100 people who were allegedly linked to the organization of the referendum.

Attempting to show the involvement in the case of all these figures who are in favour of Catalonia's right to decide on its political future democratically, the Civil Guard report, as well as indicting politicians Carles Puigdemont, Oriol Junqueras, Jordi Sànchez and former Catalan police chief Josep Lluís Trapero, now adds a long list of new names. These include former Catalan president Artur Mas, the general coordinator of the Catalan European Democratic Party (PDeCAT) Marta Pascal, secretary general of ERC Marta Rovira, outgoing spokesperson for the left-wing party CUP Anna Gabriel, her colleague and former CUP parliamentary group leader Mireia Boya, and the president of the Association of Municipalities for Independence (AMI) Neus Lloveras. And so on, with a list that totals over 100 names.

In fact, the document brings together several reports on the Catalan question and, even, incorporates the name of the Manchester City football manager Pep Guardiola, for having read a manifesto in favour of the referendum at a pro-independence event on 11th June this year. According to the Civil Guard, the manifesto "amounted to a mobilization to defend a unilateral approach" and, therefore, according to the report's criteria, Guardiola was trying to mobilize all supporters of independence".

And the report argues that not only were these figures committing offences of rebellion, but also firefighters, members of Catalonia's Mossos police force, students and town councilors representing the CUP all committed criminal acts on 1st October. Among the arguments given as evidence of this is that the officers of the Mossos can be seen to have stayed inactive, since the Spanish police forces "had to open the way".

This report is thus added to others already presented by the paramilitary police which accuse recognized figures involved in the independence process of crimes of rebellion, among other offences. Judge Llarena, then, will have to evaluate it and decide what to do. For the time being, acting Catalan vice president, Oriol Junqueras, has been called to testify in court on 4th January on the question of whether he can be released on bail and, even though Junqueras has decided not to testify verbally, he will be brought to the court at 10.30am from the Estremera prison, where he has spent 53 days behind bars.

British newspaper The Guardian has questioned Spanish justice and asked why it is able to act so fast regarding the Catalan question and so slowly in corruption charges affecting the PP: "the alacrity with which the justice system has responded to the Catalan crisis is in marked contrast to the glacial pace with which it is handling the hundreds of corruption cases involving members of the ruling Popular Party".

On the one hand, there are continuing efforts by the Spanish police and justice to take action against everything linked to the Catalan independence process; on the other, are the views such as those expressed by international media since the election, that the behaviour of Mariano Rajoy's government, in ignoring the will of a great part of the Catalan population, is not normal in a democracy. Even German newspaper Der Spiegel has explained, that the results of last week's Catalan election giving the pro-independence forces a parliamentary majority "have wiped out the EU's hope of putting an end to the crisis" which has now become chronic. 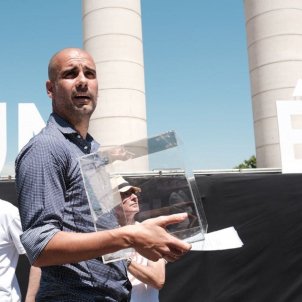