The CIA has declassified documents showing that death squads which carried out dozens of murders and attacks in 1980s Spain were set up with the agreement of then-prime minister Felipe González himself, leader of the Spanish Socialist government. These extra-judicial hit squads were known as the GAL (Antiterrorist Liberation Groups) and they were created during Spain's democratic era, in a move which the American intelligence agency refers to as an "unorthodox strategy" by the government.

One of the declassified CIA documents, as reported by newspaper La Razón, states: "Felipe González has agreed to the creation of a group of mercenaries, to combat terrorists outside the law".

The release of the US documents confirms that the orders for the Spanish government-backed assassinations and bombings carried out by the GAL came all the way from the top. Felipe González, prime minister of the 13-year post-Franco government which was key in the evolution of today's Spanish state, has frequently been accused of being the figure known as "X" who approved the creation of the death squads to murder suspected ETA terrorists. Now, the released US documents provide further external evidence. Two members of González's government, José Barrionuevo and Rafael Vera, went to jail in the 1990s for their part in the GAL atrocities, which caused at least 27 violent deaths.

CIA agent Colin Winston, who wrote one of the reports, appears to have expressed surprise at the line being taken by the democratically-elected Socialist administration under González: "The Spanish government seems determined to adopt an unorthodox strategy in relation to ETA," he states in a 1984 summary entitled "Spain: Terrorist Resurgence".  After a phrase that has been censored, perhaps to indicate the name of the source, the CIA author writes that "González has agreed to the formation of a group of mercenaries, controlled by the army, to combat terrorists outside the law".

After another censored phrase, the report adds that "the mercenaries would not necessarily be Spanish and their mission would be to assassinate ETA leaders in Spain and France." The Basque terrorist group ETA, which caused 829 deaths between the 1960s and 2011 was described by the CIA as "perhaps the greatest challenge facing the González administration."

And the US agency made a prophetic warning for the future, given the gravity it attributed to the policy being adopted by the Felipe González government: "Bungled operations in a dirty war against ETA could severely discredit the González administration, which makes much of its devotion to democratic freedoms and legalities." 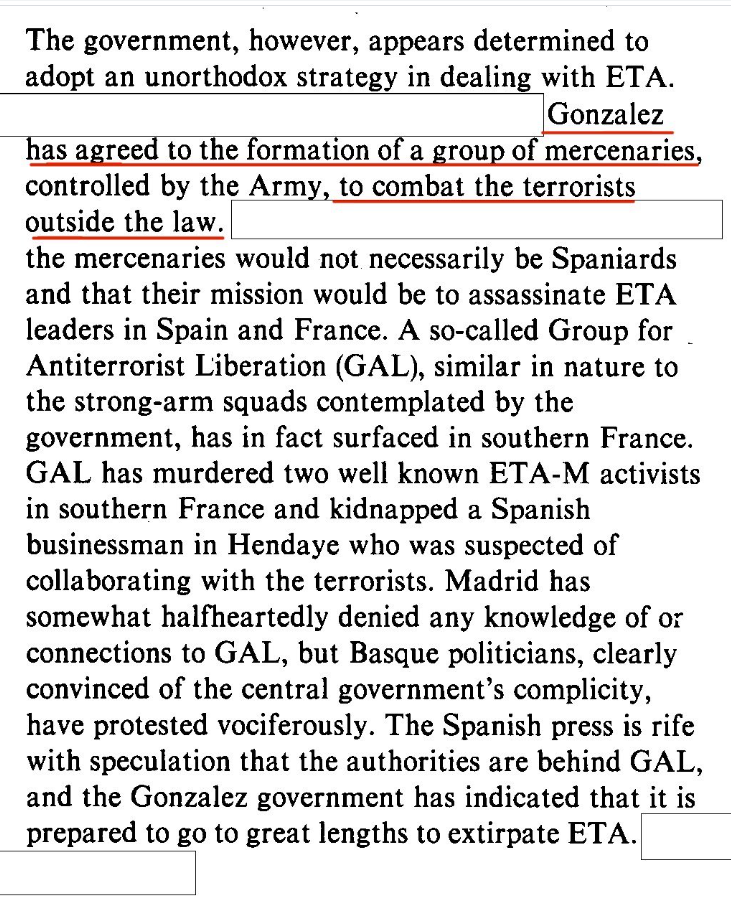 Another of the documents quoted by the Madrid newspaper states that the creation of the GAL was not the first time that the Spanish state had fought ETA using illegal means. A footnote to a dossier cites antecedents such as Anti Terrorismo ETA (ATE), the Alianza Apostólica Anticomunista (Triple A) and the Batallón Vasco Español.

Among the sections which have been removed from the released versions of the documents, the CIA maintains partial censorship over the biographies of mercenaries cited in the reports for their relationship with the dirty war against ETA.

The GAL were a Spanish para-police armed group that conducted a "dirty war" - state terrorism in Spain and France during the 1980s with the collaboration of senior officials in Gonzalez's interior ministry. Several politicians and security force figures were convicted in relation to the GAL, including interior interior José Barrionuevo and undersecretary for security Rafael Vera; Socialist party secretary in the Basque Country, Ricardo García Damborenea; the civil governor of Guipúzcoa, Julen Elgorriaga; and Civil Guard lieutenant colonel Ángel Vaquero and general Enrique Rodríguez Galindo.

There has been on-going speculation over the identity of a senior political figure who was in ultimate charge of the GAL, referred to in the case only as Señor X. However, González has never been charged.