Three and a half years after Catalonia's independence referendum of October 1st, 2017, yet another trial has opened against a group who took part in it. Seated in the dock this Wednesday in Barcelona were Jordi Matas, Marta Alsina, Marc Marsal, Josep Pagès and Tània Verge - all lawyers and academics. The five, charged with disobedience and usurpation of functions, were members of the electoral commission, created by the Catalan government to oversee the transparency and fairness of the 1st October referendum electoral process. In the context of the immense pressure from Spanish authorities in the weeks before the referendum, the commission never exercised many of its planned functions. Indeed, those who gave evidence on the first day of the trial - the 15 members of the smaller constituency commissions, responsible for individual Catalan constituencies - argued that, in fact, they never even held office.

In the courtroom this Wednesday, the constituency commission members outlined the details of this. All explained that they had received a call in late August or early September inviting them to become electoral commission members. They agreed; their names were posted on the referendum website; and they were called to a meeting in Parliament on 12th September, where officials informed them that the referendum law had been suspended by the Constitutional Court and therefore they were not to do anything until further notice. They later received requests from the Constitutional Court to leave their posts.

VIDEO | Constituency commission member: "At the meeting of the 12th September, they told us not to do anything, so we didn't even get to the point of taking up the post"

Trial to continue on Thursday

The trial continues on Thursday. For the five former electoral commission members, yet to testify, prosecutors demand nine months in prison for serious disobedience to authority along with two further years for usurpation of public office. An alternative proposal from the prosecution is to sentence them for an offence of disobedience of court rulings, with a fine of 5,400 euros and one year of disqualification from supervising electoral processes.

The key period under the spotlight in the trial is the three week interval starting on September 6th, 2017, when a stormy session of the Catalan Parliament passed the law to allow the October 1st referendum, also including the nomination of the electoral commission members, who were appointed the next day by the same plenary session, despite a warning from the Constitution Court. The chronology that then ensued consisted of a legal cat-and-mouse game - with actions by the commission to prepare for the referendum and counter moves by the Spanish Constitutional Court to prevent these becoming legal or annul them.

Finally, on 20th September, the Constitutional Court imposed coercive fines of 12,000 euros per day on each commision member if they did not cease to act as such. On 26th September, the Spanish state gazette published a letter presented to the TC by the five commission members in which they declared their resignation and nullified the agreements adopted until then. 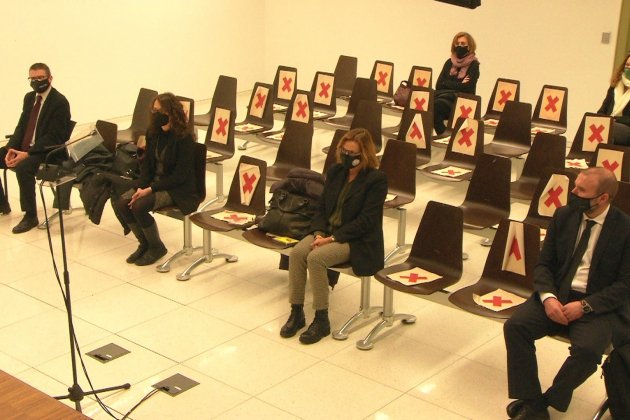 The defendants in the electoral commission trial this Wednesday / ACN

Trial, "an attack on the election result"