Catalonia to break off its relationship with the Spanish monarchy, says Torra 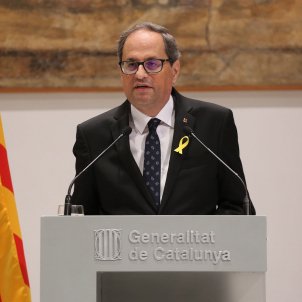 Catalan president Quim Torra has formally broken off the Catalan government's relationship with the Spanish monarchy, in a decision which has overshadowed his awaited response on the question of whether he would attend Friday's opening of the Mediterranean Games in Tarragona alongside Spain's king, Felipe VI. In an institutional statement on Friday at midday, Torra announced that in the end he would attend the inauguration of the Games, presided over by Felipe VI and alongside Spanish prime minister Pedro Sánchez. However, he added that from this moment forward, the Catalan government will break off its relationship with the Spanish crown.

In his statement, Torra argued that the political situation in Catalonia was extremely serious, with Catalan leaders being held as political prisoners and others in exile, and that in Catalonia, "40 years after the end of the Franco regime, people are still persecuted for their ideology, even one that is scrupulously peaceful and democratic"; he complained that "the king of Spain has never apologised" for his television speech on 3rd October last year, following the repression of the independence referendum with "a violence that caused a thousand injuries and did not prompt [the king] to give a single word of support or consolation to those people or their families".

In conclusion, Torra explained that four decisions had been made. In the first place, that he would attend the Mediterranean Games' opening ceremony on Friday evening - "because the inauguration of the Games takes place in our home and they won't drive the Catalan government and president away from our home ever again. In Catalonia, Catalans decide", he argued; secondly, he added that, from now on, no member of the Catalan government will attend any event called by the king and will not invite the monarch to any event organized by the Catalan government.

As well, he explained that he would present the king with the Catalan Ombudsman's Office reports on the police excesses on referendum day and the subsequent judicial persecution and also that, as of Friday, he would give up his position as honorary vice president of the Princess of Girona foundation, the charitable foundation headed by the monarchy.

Torra commented that "today there are eight honourable and peaceful democrats locked up for their ideas", naming the jailed vice president Oriol Junqueras, all the ministers and the civic leaders Jordi Sànchez and Jordi Cuixart; he referred to the condition of exile of president Carles Puigdemont and another group of ministers, along with key pro-independence politicians in the last parliament, Marta Rovira of ERC, and the CUP's Anna Gabriel who are also exiled in Europe; he denounced the persecution of hundreds of people for their ideas, including artists, teachers, and participants in the CDR protest groups; and he spoke of the suffering endured by the families of both prisoners and exiles.

"We can't just proceed as if nothing has happened, and we won't. For the political prisoners and exiles, for the dignity of our institutions and the people of Catalonia. And today above all, for Tarragona", he concluded.

The Catalan president's decision was announced after a long debate about the best way to respond, in the presence of the Spanish monarch himself, to Felipe VI's failure to denounce the police violence against the Catalans on 1st October. At the same time, however, the Catalan government faced the dilemma that standing-up the monarch would also mean abandoning its own institutional role on an occasion like the inauguration of the Mediterranean Games - an event which, as president Torra commented, would not have been possible without the support of Catalan government.

Torra's announcement was made on arrival in Barcelona, after his visit on Thursday to Berlin to meet with president Puigdemont. 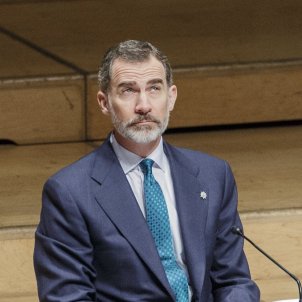 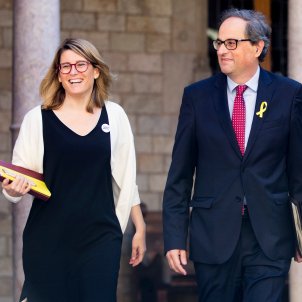