The three Catalan pro-independence MEPs in exile, Carles Puigdemont, Clara Ponsatí and Toni Comín, have sent a letter to their fellow European parliamentarians informing them that the Council of Europe has called on the Spanish government to release from prison the pro-independence leaders convicted over the 1st October referendum and also to put an end to its extradition claims against the Catalan politicians who are in exile.

Just last week, the European Parliament presented arguments to the EU General Court (EGC) requesting that the parliamentary immunity of Puigdemont, Ponsatí and Comín be once again withdrawn, after the full chamber had voted to that effect in March in response to the Spanish Supreme Court's request, and then the EGC had decided in May to reverse that decision, on an urgent interim basis, in response to an appeal made by the Catalan trio.

The three politicians emphasize in the letter to their colleagues that the Council's view is that Catalan pro-independence leaders have been persecuted by the Spanish authorities for statements made in the exercise of their political mandates and as a result of the organization of peaceful demonstrations.

They also highlight the fact that the resolution approved yesterday by the Parliamentary Assembly - with 70 votes in favour and 28 against - recognizes that no pro-independence leaders called for or caused any violence, and that a new legal interpretation was required to carry through the indictments for the crime of sedition, which involved, as the Council of Europe report said “violence without violence”. That is, the sheer number of demonstrators represented psychological coercion against the police forces facing them.

The text explains that the Council of Europe has also called for an end to the prosecution of lower-ranking officials who have been involved in organizing the 1-O referendum, many of whom are now facing trials.

Finally, the letters stressed that the report approved yesterday in the Council of Europe's Assembly in Strasbourg, with the title "Should politicians be imprisoned for statements made in the exercise of their mandate?" referred specifically to the situations of political prisoners in Spain and Turkey.

Following the adoption of the resolution by the Parliamentary Assembly of the Council of Europe, Puigdemont made an ironic comment on social media, addressed directly to the EU: "Council of Europe 1, European Union 0". 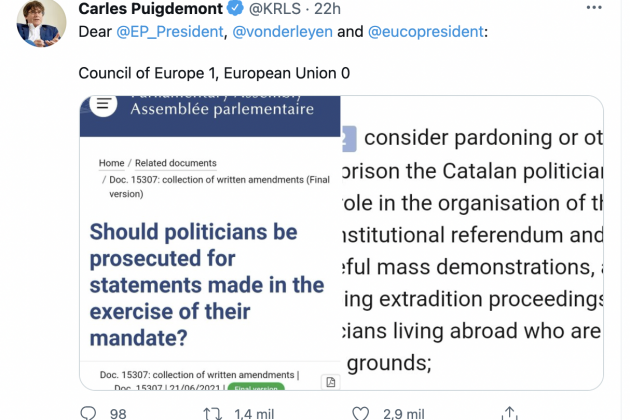