A new high-tension twist to the plot in the Spanish Supreme Court trial of the Catalan pro-independence leaders. On Wednesday, Mossos d'Esquadra commissioner Ferran López, responsible for the Catalan police operation on the 2017 referendum day and head of the Mossos during the period of direct rule under article 155, told the court about the mechanisms for coordination of the Catalan police force with the state police bodies for the October 1st, 2017, vote and the days leading up to it. He stated that there was "never" a Mossos operation, but rather a "joint" mechanism of all the police bodies, in which the Catalan police participated by sending a pair of officers to each voting centre, and he added that the mechanism "broke down" through the action of the two Spanish bodies, the National Police and the Civil Guard.

López's declaration ended with a request from defence lawyer Xavier Melero for a confrontation, a provision of Spanish criminal procedure in which conflicting testimonies made by two witnesses can be resolved, in most cases via direct face-to-face appearance of both of them. This would bring Mossos commissioner López together with the senior Spanish interior ministry official who was overall coordinator of the police operation on referendum day, colonel Diego Pérez de los Cobos.

During his testimony to the Supreme Court on March 5th, colonel De los Cobos denied that such a combined operation existed and went as far as to assert that the Catalan commissioner was lying. The Civil Guard officer affirmed that the Mossos not only did not help to stop the referendum but even assisted in ensuring it could go ahead. Since then, witness questioning by lawyer Melero has repeatedly sought to draw out refutation of the colonel's words.

Ferran López was the man who was put in charge of the Mossos when article 155 swept away Catalonia's government and its police leadership. He was the commissioner who, during the months in which self-government was suspended, was seen at events consorting with the Spanish king and with judge Pablo Llarena, the investigating judge who presided over the first phase of this case. At the Supreme Court, he did not flinch from stating that both former chief Josep Lluís Trapero and he himself had warned Catalan president Carles Puigdemont and his number two Oriol Junqueras of the risks that pressing ahead with the referendum could bring and that the two senior policemen were committed to complying with the court orders. 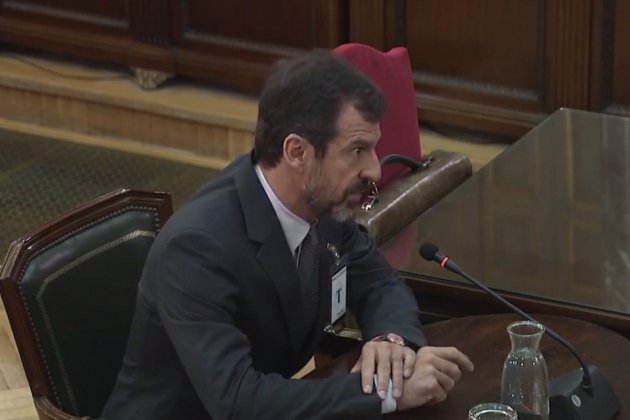 Before the court, López also declared that the joint mechanism broke down on 1st October itself, that they became aware of this through seeing television images and that this was confirmed after the coordination meeting they held in mid-morning.

In relation to the accusations that De los Cobos had repeatedly made against the Mossos leadership, López stated that he had heard no criticisms or recriminations from the Civil Guard colonel, not on the day of the vote, nor the next day, and nor during the subsequent months in which the colonel was one of the top officials in the ministry which the Catalan police were responsible to.

In fact, the two of them didn't talk any further about what had happened that day. There was only one exception, the commissioner explained. After hearing De los Cobos's statements to the National Audience court on what had happened on 1st October, Lopez asked to meet with both the Civil Guard colonel and the former security secretary of the Spanish interior ministry, José Antonio Nieto, before giving his testimony - the reason being not to ask for explanations or to make criticisms, but rather to warn them that in court he was going to explain under oath his own vision of the facts, contradictory as it was to what had been set out there. "Everyone should explain their reality as they experienced it, and this is mine," he argued.

At the end of questioning, Melero asked for article 729 of the Law of Criminal Procedure to be applied, to carry out a direct confrontation of the testimonies of López and De los Cobos, and also including a witness summons to the Civil Guard commander responsible for the searches at the Catalan economy ministry on 20th September, 2017.

Presiding judge Manuel Marchena asked his reasons for demanding the procedure and the details of which points of article 729 his petition was based on. Melero explained that he was referring to the third paragraph or the second. "Or even the first", said Marchena ironically causing a few smiles in the court after the tension of the commissioner's declaration. The first point of the article is the one referring to a direct face-to-face confrontation of the two witnesses.

In the afternoon, when the sitting resumed, the court announced it was postponing the decision on the confrontation until all the relevant evidence had been heard, while Melero accepted the postponement and withdrew the request for the additional witness summons relating to 20th September.