Quim Torra's Catalan government has been questioning whether a real will exists in the Spanish executive headed by Pedro Sánchez to re-launch the meetings of the bilateral dialogue table. However, today, Catalan presidency minister Meritxell Budó gave an assurance from the Generalitat there is no wish to postpone the meeting on the Catalan side. And almost at the same time, the Spanish government spokesperson María Jesus Montero said that the Sánchez government would have no problem with returning to the dialogue table in the second half of July.

Speaking after today's Catalan cabinet meeting, Meritxell Budo said that in the coming days - this week or next - president Torra plans to meet with the pro-independence parties and civil groups to address the resumption of Spain-Catalonia dialogue. "From the Catalan government we have always said that we will sit down at the dialogue table. What puts it at risk at the moment is not the Catalan government but the government of Spain, which must decide whether it really wants to resume this table", the minister asserted. 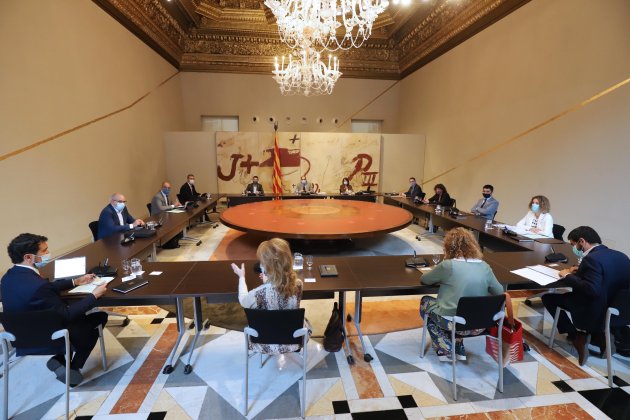 The Catalan government, meeting in the Saló Daurat as usual but with a larger table to allow distances to be maintained / Ruben Moreno

Budó criticized that the Pedro Sanchez executive had first "shielded" itself behind the upcoming Basque and Galician elections, due on July 12th, and "now behind the Catalan elections which have not even been called", calling on the Spanish government to clarify "whether there really is a will to call the dialogue table together."

"The government of Catalonia has no intention of delaying this meeting," she said.

At almost the same time, the Spanish executive was announcing that it would be happy with a dialogue table meeting in the second half of July. "The government maintains its roadmap", said María Jesús Montero, and after the "pause" during the pandemic, "the return to the new normality allows things to resume." The Socialist politician made it clear that "the prime minister had announced that he would have no problem meeting in July" if the two cabinets agree on a date.

Up to now, though, sources in the Spanish executive have themselves raised doubts about the Catalan president Torra's "political will" to go ahead with the meeting. The Sánchez government's recent new ally, the anti-independence Ciudadanos party, has also threatened to withhold its future support for the government budget if the dialogue table resumes. With regard to Ciudadanos, María Jesús Montero said that now was not the moment for "an exchange of vetos" and called on Cs to separate the budget from other questions, like the dialogue table.

Another who has spoken about the resumption of dialogue in the last few days is Barcelona mayor Ada Colau. In an interview with Ràdio4-RNE yesterday she asserted that "Quim Torra will not be able to lead dialogue because he ignores all the Catalans who don't support independence". Meritxell Budó responded to this criticism today, defending the legitimacy of the president from the moment he was elected by Parliament. She countered that Colau does not represent the whole city of Barcelona either, and yet no-one is arguing with her legitimacy.

Budó also recalled that Colau's left-wing Comuns group are represented at the dialogue table through their alliance with Unidas Podemos, which in turn is part of the Pedro Sánchez executive. "Mayor Colau is perfectly represented if there is any proposal from the Comuns," she said.