A prisons court in Catalonia has provisionally confirmed the open prison regime granted by prison officials in July to two of the Catalan political prisoners: former speaker of the Catalan Parliament, Carme Forcadell, and former Catalan labour minister, Dolors Bassa, both jailed for sedition as a result of the 2017 Catalan referendum and independence process.

In both of the rulings, the judge from Barcelona prison supervisory court number 1 dismissed the prosecution's appeals against the "3rd level" or open prison regime granted to the two women, and they will thus be allowed to continue leaving the prison during weekdays and overnight at weekends. This contrasts with the situation of the seven male Catalan political prisoners in Lledoners jail, whose 3rd level prison regime status and rights to work in jobs or voluntary activities outside the prison were withdrawn.

However, today's decision is still provisional in two senses: firstly, the ruling can be appealed to the same court or, directly, to the Spanish Supreme Court; and secondly, the definitive prison status of all nine pro-independence prisoners is pending the Supreme Court's hearing of the substantive appeal by public prosecutors against the 3rd level status granted to them earlier in 2019.

The judge's ruling observed Carme Forcadell has "a favourable attitude of self-criticism, adequate problem solving and the presence of cognitive resources when faced with conflicts; in her treatment she has optimal commitment and analysis, and identification of risks and past behaviour, and she recognizes the precipitant elements of the analyzed behaviour and with alternative cognitive strategies".

He also highlighted "low levels of risk factors, good empathy and optimal stability" and her current occupation oriented away from politics centred on a "management activity in a community activities body [for people in] a vulnerable social environment, in addition to the normal time spent in the family environment, without an effective project in politics".

The judge says that, after examining the overall situation, "no factors can be deduced that hinder Carme Forcadell Lluís's compliance in the context of the open prison regime, given her good progression in treatment tasks following the work plan based on her conditions and with the goals sought by her penal compliance". 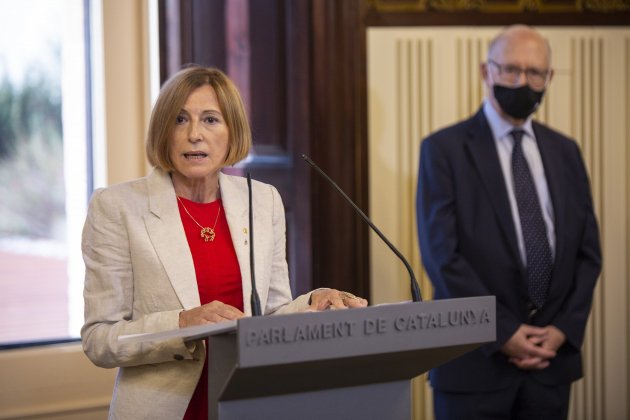 Event in the Parliament of Catalonia - Sergi Alcàzar

The judge also maintains a 3rd level open regime for former Catalan government labour minister Dolors Bassa because, as he says in his brief, she has assumed "the consequences of the acts themselves, as well as, without renouncing her ideology (a matter obviously not punishable), displaying adequate resources to address alternatives to the actions [which are the subject] of her sentence".

He states that she has "low levels of risk in all areas, displaying the intimidating effect of the punishment, which influences the factor of special prevention, and there is also evidence of a positive change in factors related to punishable activity that is shown in her overall behaviour."

He adds that Dolors Bassa "does not express any intention to return to the political sphere, with future plans in her occupational area, until reaching retirement, not far away, maternal care and family life."