Political prisoner Jordi Cuixart: "How can they expect us to regret anything?"

This Friday it will be a month since seven of the Catalan pro-independence prisoners were ordered to return to a standard lock-up jail regime. In line with new doctrine created by the Spanish Supreme Court, a prisons court revoked, for the second time, the open prison regime that had been granted to them. Among the reasons given for making their punishment harsher: that the inmates continue to justify the actions for which they were convicted and have not repented of their crimes, which are centred on the roles they played in organizing the 2017 referendum on Catalonia's independence from Spain.

Now, the same argument - the prisoners' lack of regret for their actions - has been used again, by the judge who this Tuesday cancelled the open jail regime for the other two Catalan political prisoners, Forcadell and Bassa. From his prison cell, the head of the Òmnium Cultural organization Jordi Cuixart responded this Wednesday, putting Amnesty International's new report on the table. "How can they expect us to regret anything," he asks, "in the face of state powers which are incapable of listening to the international community?" 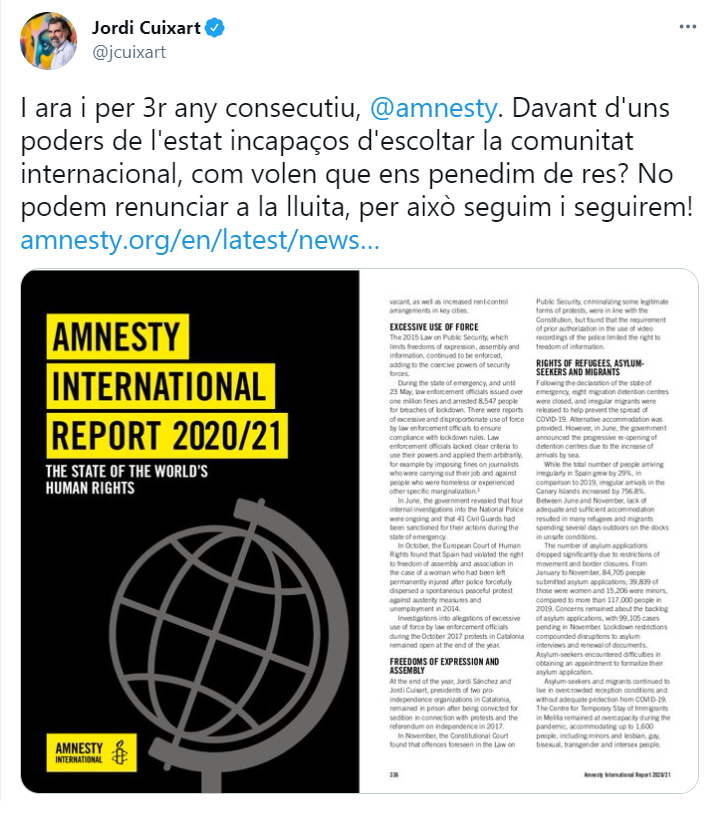 Cuixart attached to his tweet a section of the 2020 AI report on the State of the World's Human Rights, published by the leading human rights body this Wednesday, in which, for the third consecutive year, the case of the imprisonment of Cuixart and his fellow pro-independence activitist Jordi Sànchez are highlighted as the most serious instances of violation of the freedoms of expression and assembly that have taken place in Spain.

The Amnesty International report notes: "At the end of the year, Jordi Sànchez and Jordi Cuixart, presidents of two pro-independence organizations in Catalonia, remained in prison after being convicted for sedition in connection with protests and the referendum on independence in 2017."

Cuixarts adds in his tweet: "We can't give up the fight, that's why we continue and will continue". A re-statement of intent that he already offered before the trial judge, when he said he would "do it again".

Three and a half years in prison

Jordi Cuixart and Jordi Sànchez were the first Catalan pro-independence leaders to enter prison. Just two weeks after the referendum and with the political tension palpable, Spanish judge Carmen Lamela sent them to Soto del Real prison on charges of sedition for, she said, "having incited the masses on 20th and 21st September to prevent, without success, Operation Anubis against the organization of the referendum".

The Supreme Court ended up sentencing them to nine years in prison for this crime. They have served three and a half, that is, a third of their sentence. The Catalan justice department has already announced that it will review the prisoner regime again before July.

In the main image, Jordi Cuixart in an act calling for an Amnesty Law in Catalonia. / EFE