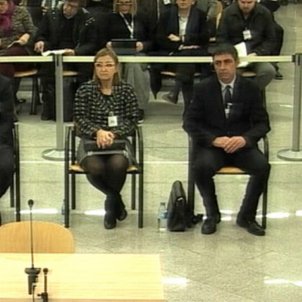 The Catalan police trial - the second major trial arising from the 2017 Catalan independence referendum - is now in the hands of the judges. Today saw the final statements in the case in which Mossos d'Esquadra police chief, Josep Lluís Trapero, police superintendant Teresa Laplana, and senior Catalan interior ministry officials César Puig and Pere Soler sat in the dock.

After two months of hearings, the enforced stoppage due to the Covid-19 emergency and, now, three intense days of final conclusions, the court presided over by Concepción Espejel has retired to deliberate on whether to convict the four accused for sedition, disobedience or, to acquit them, as the defence teams have confidently demanded.

The public prosecutors was not able to present evidence of the "violent uprising" that characterises the crime of rebellion - predictably, since the same thing had occurred in the Supreme Court trial of pro-independence leaders - and reduced the charge to sedition, although they did not offer credible evidence for this crime either. The alternative, as the prosecutors set out as the trial was drawing to a close, is a lesser charge of disobedience, but defence lawyers' arguments dismantled this as well.

With the main prosecution witness, Civil Guard colonel Diego Pérez de los Cobos, discredited after he was dismissed from his position over the International Women's Day protest report, the prosecution has been left bare and the court will have to decide whether it can really convict the accused to the 10 years in prison demanded, in the case of the alleged sedition offence, or alternatively disqualify them from holding political or police office for 10 years, as the case may be.

"The prosecution has no solid evidence to convict for sedition." Olga Tubau, lawyer to Josep Lluís Trapero as well as Teresa Laplana, focused her final statement on dismantling the prosecution case for sedition. She also overturned the alternative charge which, as the prosecutor remarked, would prevent the affair from "turning into waste paper", disobedience.

Tubau stressed that at all times the Mossos chief acted in compliance with the court order requiring police to act to stop the referendum. In fact, the lawyer stressed that before his direct compliance the judge's orders on taking action to stop the vote, he "went further" when he spoke at a meeting with Catalan political heads and asked them outright to call off the referendum.

This “decimates both the sedition and disobedience charges”, said Olga Tubau.

Today, in the second day of Tubau's summing-up, she was strongly critical of Civil Guard colonel Diego Pérez de los Cobos, whose work as coordinator of the police operation on the independence referendum failed, since the "error" in the police action that day came from all three police corps deployed, namely the Catalan Mossos, the Spanish National Police and the paramilitary Civil Guard.

The final words of Olga Tubau to the court, a quote from Spanish jurist Manuel Alonso Martínez: "A citizen of a free society must not be made to atone for the faults that are not his or be a victim of the impotence and selfishness of the state. This is something which the courts can avoid. And I ask them to avoid it with an acquittal." Tears came to the lawyer's eyes as she made these concluding remarks, for which she immeidately apologised: "Please excuse this regrettable spectacle."

Tubau was followed by Cristóbal Martell, lawyer for former director of police Pere Soler, who after waiting his turn for 5 hours, came out like lightning. He denied "radically" that his client, the interior ministry official responsible for the Mossos force, had tried to "align" the police body in favour of the independence of Catalonia. The Mossos operation to prevent the illegal referendum of 1st October "may have seemed very hippy", he said, "but it was certainly not an attempt to fool the other police bodies."

"Pere Soler was not part of this war," said the lawyer of his client, who denied that Soler's actions during the autumn of 2017 in Catalonia were a crime of sedition. The interior ministry official did not take part in the "genesis" of the Mossos police documents, the lawyer said, nor in the meetings in which Trapero and other police commanders "warned" the former Catalan president Carles Puigdemont and other political leaders that he had to call off the referendum. “My client will forgive me, but he wasn’t part of that scene, he wasn’t there,” he said. "Why? Because he's extraordinarily respectful. He had previously served as director general of prisons. He knows a thing or two about legality. He knows a thing or two about relationships with judges."

The final words were from Fermín Morales, lawyer for former interior ministry secretary-general César Puig, also accused of being a player in the "independence plan". With regard to this alleged plan, "where is the evidence that shows my client's role?" asked the lawyer, in the final act of the second major trial arising from the Catalan independence referendum of 2017. Others are still to take place.

Editorial Trapero, liberty is the only option José Antich 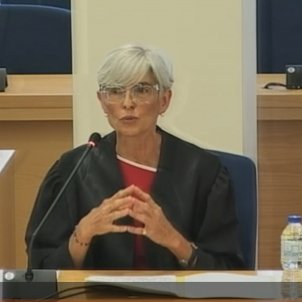