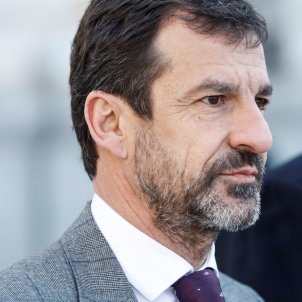 In a remarkable gesture, the head of Catalonia's Mossos d'Esquadra police force has held a meeting for the first time with the speaker of the Catalan Parliament to talk about law and order. It is as unprecedented as the current political circumstances, in which the parliamentary speaker Roger Torrent is the highest authority within Catalonia. With Catalonia under direct rule from Madrid under article 155 of the Spanish constitution, the Mossos are not responsible to the Catalan authorities but rather to Spain's interior minister, José Ignacio Zoido. Despite this, Mossos chief Ferran López recognizes Torrent as the maximum authority within Catalonia and for this reason believed the meeting was necessary.

Ferran López called Roger Torrent on Sunday night to inform him of incidents in that afternoon's protest in Barcelona and to seek a discussion on the issue, as El Nacional has learned from sources close to the meeting. The Mossos had to respond strongly to protesters outside the Spanish government's delegations in Barcelona and Lleida, following Sunday's detention of exiled Catalan president Carles Puigdemont in Germany. The demonstration called by the Committees for the Defence of the Republic ended with police giving baton blows and police vans moving at top speed to disperse protesters in the city centre. Previously, last Friday, there had also been violent incidents in the centre of Barcelona after the announcement of the imprisonment of five Catalan leaders: Jordi Turull, Josep Rull, Raül Romeva, Carme Forcadell and Dolors Bassa.

Torrent received the police chief on Monday morning, and heard the police summary of the situation emerging from the latest protests and the strategy that the Mossos plan to use from now on, according to El Nacional's sources.

It appears that the situation has changed and the type of demonstrators as well. Although it is still too soon to speak of infiltrators or to know whether a radical faction is becoming active in Barcelona as it did several years ago for general strikes or the Can Vies protest, it seems clear that the police have detected that there is a new type of demonstrator in the front line of the protests: a demonstrator wearing a backpack, hood and carrying objects to throw or to use against police lines such as pepper spray.

The Mossos have clear instructions to forbid access to the Spanish government delegation and to this end, they first mediated; then, gave megaphone warnings, and finally, dispersed the crowd, when there were already barricades and containers burning.

Given these facts, Ferran López, who arrived for Monday's meeting in civilian dress, informed the parliamentary speaker of the situation and told him of the need to maintain calm in the street as well as giving an outline of what should not happen in the next few days, according to sources close to the meeting.

The pro-independence civil groups, political parties and the lawyers working on the referendum case have asked for calls to be made for demonstrations to be kept calm  because they fear any sign of violence could be used to the detriment of the imprisoned ministers and leaders and of those now in exile about to pass into judicial hands. 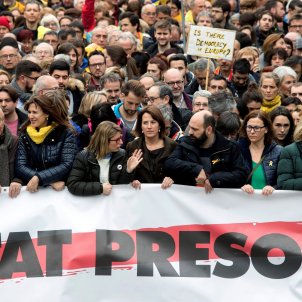 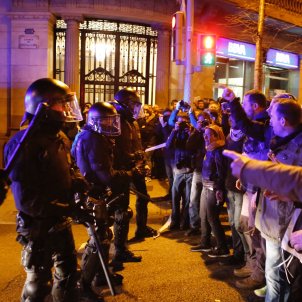