The constitutional stand-off in the Catalan Parliament is continuing. This conflict, which began at last Friday's special debate on the Spanish monarchy, pits a majority of MPs, who assert the right of the Catalan Parliament to freely express its views, against the parliamentary lawyers who have refused to publish, and have actively censored, parts of Friday's resolutions which, they say, violate the Constitutional Court rulings they have orders to comply with.

Today, the nine parliamentary lawyers closed ranks with the chamber's general secretary, in defence of the view that all are obliged to abide by the rulings of Spain's Constitutional Court. General secretary Xavier Muro had taken the decision to delete from publication conflictive points of the resolutions approved last Friday, and today the lawyers delivered a letter to parliament's procedural Bureau expressing their support for Muro's position. The letter, also signed by Muro himself, states that the secretary acted "with total independence and professionalism", and recalled that it is his brief "not to perform legal or material actions" that contradict judicial rulings.

The letter emphasizes that Parliament's legal services are made up of independent civil servants "who perform their duties with objectivity" and that they must comply with the law and court rulings.

Last Friday's resolutions, one of which declared that "Catalonia is republican" and as such "it does not recognize or want to have any king", contained sections which the legal advisors believed contradicted rulings of the Constitutional Court. As well as warning the parliamentarians of this problem, some officials stated that they would not publish the motions in the official gazette if they were passed by Parliament with the controversial sections intact. Parliament went ahead and voted on the full resolutions and they were passed by the pro-independence majority, with the conflictive phrases left in.

This Monday, general secretary Xavier Muro did proceed with the publication of the resolutions in the official gazette. However, Muro deleted the parts of the motions passed by Parliament which he said contravened rulings by the Constitutional Court. He was obliged to prevent their publication, he said. 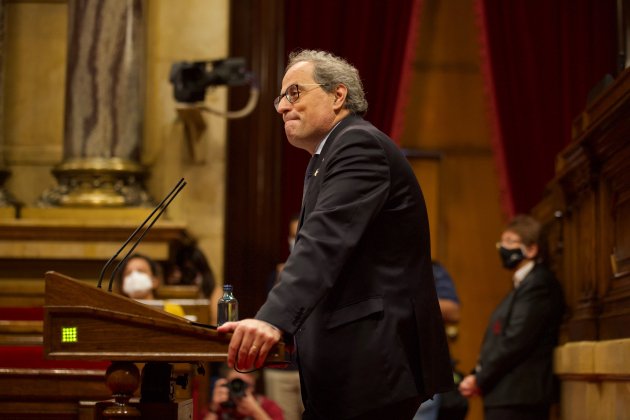 Catalan president Quim Torra during the plenary session on the monarchy. // EFE

Thus, at the end of the published version of the texts, edited by Muro, there is a note mentioning that several references had been deleted, such as the description of Spain's Bourbon royal family as a "criminal monarchy". The general secretary removed the phrases because of this "duty" to "prevent or paralyze any legal action or material that might involve non-compliance” with the court rulings.

Monday's publication of the resolutions without some of the sections which had been passed by Parliament provoked outrage. Catalan president Quim Torra asked the speaker Roger Torrent, who is head of the Bureau, to order that the general secretary be fired from his post. Torra saw both this action and the Electoral Commission and Supreme Court rulings in January which led to he himself being stripped of his status as an MP as part of an assault by judicial power.

As well, the Junts per Catalunya parliamentary group also formally asked Roger Torrent for the resignation of the general secretary. In a letter signed by the group's spokesperson, Eduard Pujol, they ask that the speaker and the Bureau transfer to Muro the order to publish the resolutions in full and, in case of non-execution, that they "take the necessary measures" to make it effective. They also demand that Muro be dismissed and a person who should replace him be proposed.

"JuntsxCat asks the speaker and the Bureau of @parlamentcat to publish in full the resolutions passed in the special debate on the monarchy and calls for the resignation of the general secretary of the chamber."— Junts per Catalunya Parlament