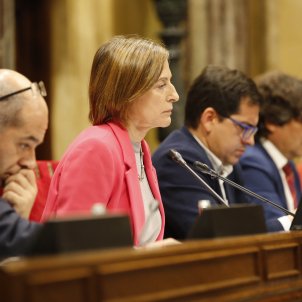 The clash between JxSí (Together for Yes) and the CUP (Popular Unity Candidacy) and the rest of parties in the Catalan Parliament over the approval of the Referendum Law hasn't taken long to come. As soon as today's plenary session started, at quarter past ten, JxSí's spokesperson, Marta Rovira, asked for a change to the day's agenda to include the debate on the bill. This set off a regulatory battle in the chamber in which the opposition parties tried to stop the initiative in an extremely tense confrontation with the Parliament's president, Carme Forcadell. It was a race against the clock whilst the Spanish state activated its own resources. At about half past one, after two interruptions to the session to convene meetings of the Board of the Parliament and the Board of Spokespeople, to protests from the opposition, the change to the agenda and the bill's exemption from the usual statutory process allowing for it to be voted on today were approved. The following conflict was caused by the president's reticence to pause the session.

Earlier, at 9 in the morning, the Parliament's Board accepted the text for consideration, after Forcadell presented a request for the recusal of the 12 magistrates of the Constitutional Court, the same magistrates who during today may well have to pronounce on the chamber's decisions.

The change to the agenda to include the debate on the Referendum Law was finally accepted with 72 votes in favour (JxSí, CUP and the independent deputy), 60 against (C's, PSC, PP and 8 from CSQP) and 2 abstentions (CSQP). [C's is Citizens, PSC, the Socialists' Party of Catalonia, PP, the Popular Party and CSQP, Catalonia Yes We Can] The vote had to be repeated, because the opposition deputies were not able to vote the first time due to a problem with the voting mechanism. Then approved, in the middle of a noisy scuffle, was the exemption from the usual procedure to be able to debate and vote on the proposal today. "They should hang their heads in shame", shouted PP's Xavier Garcia Albiol from his seat. The vote on the exemption was passed with 69 votes in favour (JxSí and CUP) and 3 against from CSQP, the other deputies abstaining.

The debate didn't end with the vote. The opposition parties were infuriated by the Board's decision to not suspend the plenary assembly to be able to prepare their amendments. According to the approved agreement, they had two hours to prepare their amendments. The president had announced that the assembly would continue during this time and the session would be conducted under the government's control. Finally, however, Forcadell has had to accept to suspend the session at quarter past two. An hour of suspension. It started again with the government's session for two hours, to be followed by the debate on the law.

Change to the agenda

It all started with the JxSí spokesperson's comments. "Catalonia has the right to decide. A right which we cannot renounce and which is considered in the preamble of the Statute [of Autonomy] of 1979", said Rovira after informing the chamber that the agreement with the CUP allowed them the direct process of the debate and vote on the text in this morning's plenary assembly.

Rovira explained that the law had not been able to follow the procedure that JxSí would have wanted due to the "persecution" that the pro-independence parties suffer. "For that reason we're using this regulatory path, the one in [article] 81.3 [of the Parliament's rules], which allows us to assimilate the debate and vote on this text," she added, while, to allow the other parties to participate, she asked for an amendments period of two hours.

"We find ourselves forced to ask that it is exempted from the full debate and the judgement of the Council of Statutory Guarantees", she said while highlighting that this exemption does not affect the legality oversight, which can be carried out a posteriori, through the ordinary courts. Rovira called for two votes: one to accept the change to the agenda -"and that all the control is guaranteed until the end"- and a second for the debate and vote on the text.

The CUP deputy Anna Gabriel added that the independence supporters have not met a Spanish state willing to talk and expressed her resistance to end up shrunk within the Constitution. "There is a country which has demonstrated more than enough that we want to decide. The debate and vote on this law has become an act of collective dignity," she said.

Complaints from the opposition

From the PP, spokesperson Santi Rodríguez complained that the right of the deputies had not been respected, while Carlos Carrizosa of C's said they had been trampled over. “The Parliament is acting as the administrator of [president] Puigdemont's government” said Carrizosa.

PSC's Ferran Pedret highlighted the need in democracy to maintain the norms of the parliamentary process to guarantee the rights of the citizens and asked that a report from the chamber's lawyers be read which warns of the effects of approving the Referendum Law. From CSQP, Joan Coscubiela spoke about an unprecedented alteration of democratic guarantees. "Justifying a story to hold on until 1st October cannot come at the cost of leaving a democracy absolutely broken. You cannot do that," warned Coscubiela.

Next, the plenary assembly paused so that the Board and the Board of Spokespeople could analyse the request to reconsider the admission to processing of the Referendum Law. Shortly before half past twelve, once the Board had rejected the motion of reconsideration, the plenary assembly restarted. The president immediately called for a vote to accept the change to the agenda, aware that once the vote started it couldn't be interrupted. The need to win time to approve the text before Spain can act has been constant during the session. However, PP and Cs asked to speak again waving their hands so obviously that the president couldn't avoid it. PP's Alejandro Rodríguez called for the Board to analyse a new motion of reconsideration with new arguments and the president had to pause the plenary assembly and gather the two Boards again.

The resumption of the session was used by the C's spokesperson to complain that the essential publication of the proposed law was done irregularly. From that point, and after new protests, the votes started and the opposition groups reiterated their complaints about the violation of their rights and the observation of the rules. C's, as well as PP, PSC and CSQP accused Forcadell of making an inappropriate reading of article 81.3 of the Parliament's Regulations which JxSí and CUP are using to request the vote on the text.

The JxSí spokesperson responded by denouncing the opposition's "filibustering" and remarked on the course the bill has had to take in the face of the parties' attempts to block its ordinary progression. "Where did they think that we would end up, or did they think that due to these manoeuvres we would renounce our duty? We're using a path that isn't what we wanted," she finished.

Almost after four hours of debate, the plenary assembly has been suspended for an hour so that the parties have time to prepare their amendments. At 3 in the afternoon, the session will restart with the section under the control of the government and the president. 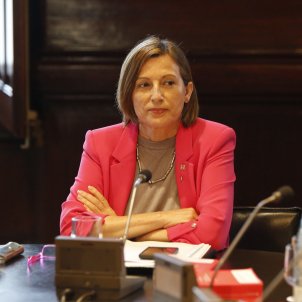 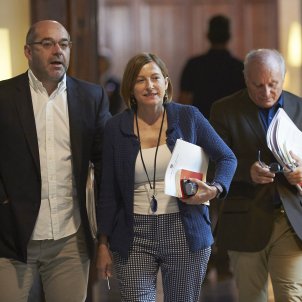