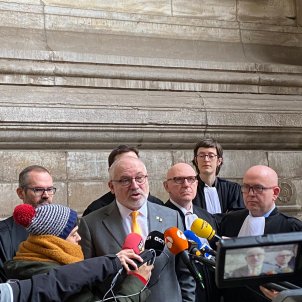 "I'm continuing the fight." Those were the first words of exiled Catalan government minister Lluís Puig this Monday as he left the courthouse in Brussels. The Belgian court has decided to postpone until 30th March its decision on whether or not to accept the third European arrest warrant issued by Spanish judge Pablo Llarena, after a three-hour session. The case of Puig, culture minister under Carles Puigdemont's government, was heard on its own today, separate from the suspended arrest warrants for his colleagues Puigdemont and Comín, as, unlike them, he is not an MEP and therefore not covered by parliamentary immunity.

Explained Puig: "The court is reviewing one by one all of the possible small breaches of [my] rights, all that the court documents say and do not say, and it looks good, in that it's postponed until the 30th March, and both sides can go on presenting all they feel is relevant."

The Catalan politician also reiterated his optimism in a tweet:

Translation:
"It must be good news to be given a second half, after three hours of hearing, in order to be able to get to the bottom of it all. I would like this justice for the hundreds of those who have been prosecuted and pursued in Catalonia. Thanks for the support received during 860 days of exile."— Lluís Puig i Gordi

After 860 days in exile and two failed attempts by Spanish justice to extradite him, Puig is now facing the third assault, activated following the Supreme Court verdicts last October 14th. The Spanish Supreme Court is demanding that Belgium turn him over to trial for a crime of misuse of public funds in relation to the Catalan independence referendum, of which four of the pro-independence prisoners (Junqueras, Turull, Bassa and Romeva) were convicted last year.

In a month, on 30th March, he has to return to court. His defence, led by Gonzalo Boye and Josep Costa, set out to the court today the many breaches of rights that their client is suffering.

The new legal process against Puig will make it impossible for him to accompany Puigdemont and Comín to this Saturday's event in Perpinyà, as under precautionary measures imposed he is unable to leave Belgium for the duration of the judicial procedure.